Last year I struggled to make a top ten list because I had a hard time picking ten movies I actually liked. With the exception of a few irreplaceable gems, 2014 sucked. I had difficulty yet again compiling such a list, but this time because too many good movies came out in 2015. 2015 was a great year for movies, if nothing else. Before we get going, I’d like to include a brief shout-out to Mr. Holmes, Straight Outta Compton, Brooklyn, and The Gift. They’re not on this list, but they could have been.

I debated for quite a while whether or not to put these films in any particular order. I think I’m sure about my favorite, but there was a six-way tie for second place. Don’t concern yourself so much with the numbers. Here are my ten favorite films of 2015, follow the links in the titles to read a full review of each:

Yeah. They jump a car between two buildings, and there’s that one scene towards the end where The Rock’s in the hospital with a cast on his arm and he looks over to the exploding cell tower and goes, “Toretto,” and then he flexes his muscles until he bursts the cast, and then he turns to his small daughter and is all like, “Daddy’s gotta go to work,” and then the next time we see him he crashes an ambulance into a helicopter before emerging with a minigun, but… fuck it, man, he flexes a cast off of his arm. Occasionally excessive action aside, Furious 7 earns its spot on this list for having an unexpectedly perfect ending. It has the best ending of the year, and I don’t think any of us saw that one coming.

Right. A lot of people did not like The Man from U.N.C.L.E. Even more people didn’t bother to see it. Both parties are firmly in the wrong, here. Don’t get me wrong; The Man from U.N.C.L.E. probably should have been a crap heap, but the sad truth of both movies and real life is that what things should be and what they are seldom overlap. On occasion, this contradiction can yield unexpectedly wonderful results. Guy Ritchie’s hilarious, fun, exciting, witty, clever, all-around-good-time adaptation of a ‘60s spy show is one such example. Y’all should freakin’ watch it.

As I said back in November, Macbeth is one of Shakespeare’s greatest plays, but also possibly the easiest one to screw up. It’s so difficult to adapt, in fact, that prior to this latest incarnation, I had never seen a direct (emphasis to exclude Throne of Blood) adaptation that I liked. With a great artistic sense and inspirational performances from Michael Fassbender and Marion Cotillard, this new Macbeth delivers a tragic, violent, upsetting, disturbing vision of the Bard’s second-greatest tragedy (after King Lear), one that will linger in my cinematic memory—and hopefully in the wider canon of Shakespeare adaptations—for decades to come.

The headline for my review of Ryan Gosling’s directorial debut called it a perfect nightmare. I stand by that and everything it means. Watching Lost River is—more than any movie I’ve ever seen—akin to experiencing a waking nightmare. Gosling’s camera fully immerses you in a diseased, inconstant, uneasy world; it grabs hold a pulls you on a disturbing, alienating visual journey, and when it finally lets go, you just don’t know what to do with yourself. Critics and audiences almost universally hated this movie—and with good reason—but I loved it.

Last year’s release of The Babadook lifted the spirits of filmgoers everywhere with the promise of thoughtful horror. In an age where slashers and franchises reign supreme, people just tend not to put much effort into their horror movies. So that was nice. Even better, even more creative, even more thought-provoking and scary and clever: It Follows. James’ review from last year really hits the nail on the head describing what makes It Follows so spectacular, so I’d recommend reading that. 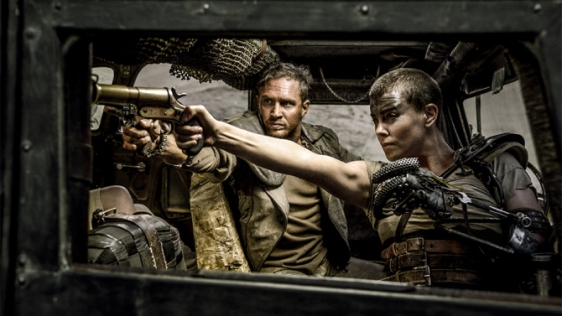 Best Picture 2016, right? Probably not, but it did get nominated in what I can only assume was the Academy’s desperate bid to look cool by association. You can hardly blame them. Mad Max distinguishes itself with a furious ease as the coolest movie of the year. Words fall utterly short of capturing its splendor. It might seem a stupid thing to say, but one must experience this movie. I can’t tell you precisely what makes it so great. That’s just the way it is, but I find all the best works of art are difficult to define. If, by some unhappy coincidence, you have yet to see Mad Max: Fury Road, I would recommend taking steps to remedy your dire situation.

As with Lost River and The Man from U.N.C.L.E., I represent a minority in including Guillermo del Toro’s Gothic ghost story on my top ten list. Reading a great deal of negative reviews for Crimson Peak, including one published on this site, I realized what everyone hated so much about it: everything I loved about it. Diff’rent strokes for diff’rent folks, I guess. As such, this is a challenging movie to recommend. We can all agree that the performances from Mia Wasikowska, Jessica Chastain, and Tom Hiddleston were as good as you’d want them to be, and we can all concur that the visual design of the movie was tip-top, but it seems we can’t agree on the quality of the script and the direction. I would suggest that if you identify as a fan of the Gothic, not necessarily of horror, then you ought to love Crimson Peak every bit as much as I did. At any rate, don’t let the negative reviews deter you. Give it a shot.

Hey everybody, Pixar’s back! A fan of Monsters University and Brave, I hadn’t been missing Pixar as much as some. At least, not until Inside Out hit theaters and I realized how long it had been since Pixar had produced anything of this caliber. Not since the back-to-back releases of Up and Toy Story 3. Inside Out represents a return to form for the top animation studio in the world, a winning combination of humor, heart-warming, and inventiveness. That last one is arguably the most important. Yes, I laughed. Yes, I cried. But Inside Out is a stroke of true, unadulterated brilliance. Easily one of the best films of the year, it has also forced its way into my top five favorite Pixar movies. Seriously, good work, everyone.

While possibly not a comedy, and probably not a musical, The Martian does earn the title of “Feel Good Movie of the Year.” At times harrowing and exciting, the film nonetheless displays a contagiously positive attitude. Free of moral quandaries, self-effacement, despair, and cruelty, The Martian purports that the best way to solve a problem is to try to solve it. Don’t wallow in self-pity; don’t play the blame game; just take a moment and think. Full of intelligent, witty, and likable characters, it’s hard not to love The Martian. Aside from that, it’s just incredibly well made. I was terribly annoyed that Ridley Scott didn’t get nominated for an Oscar for directing this film, but then I remembered something: he’s been knighted by the Queen, and that’s probably better. 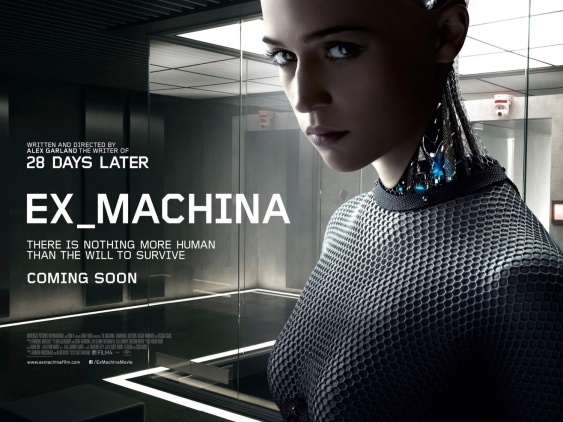 Ex Machina is one of the greatest films of the decade so far. What else can I say about it? Writer/director Alex Garland takes a familiar—even clichéd—set up, and he mutates it into an incredibly dense, thought-provoking cinematic masterwork. He tackles numerous issues simultaneously, exploiting the entire range of possibilities inherent in the story, but everything remains perfectly balanced. There isn’t a wasted line or a wasted shot. All of this is brought to life by the flawless performances of Alicia Vikander, Oscar Isaac, Domhnall Gleeson, and Soyona Mizuno. Movies like this don’t happen every year.