The tensest moments in Straight Outta Compton are the moments when a police car cruises through the frame; the ones where red and blue lights flash in the background of a shot, growing closer and closer. Every time a cop car shows up, it’s only a matter of time until the members of N.W.A. are shoved to the ground, hands behind their backs, with guns at their heads. These moments are filmed with a handheld camera, the frame bobbing and shaking as if filmed with a phone or camcorder, in ways all too recognizable from any number of recent videos of police attacks on black youth. It’s not that these moments come unexpectedly that makes them so tense, it’s that they occur so regularly. It’s that fact is what propels the strongest moments in Straight Outta Compton. 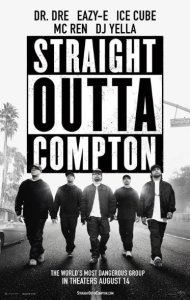 Dramatizing the meteoric rise and eventual breaking of seminal gangsta rap pioneers N.W.A., and more specifically the lives of Eazy-E (Jason Mitchell) Ice Cube (O’Shea Jackson Jr, Ice Cube’s son), and Dr. Dre (Corey Hawkins), the Dre and Ice Cube produced biopic is at its best when it’s burning with the same righteous fury as the group’s music. In the second act, the members of N.W.A. are forced to the ground and nearly arrested by police outside the studio where the group is recording the titular album, and respond to the experience by returning to the studio and laying down “Fuck Tha Police”. Whether the movie is taking liberties with the events preceding the recording the song or not*, this moment crystallizes what N.W.A. was about: artists drawing from an oppressive, racist, system working against them and channeling that anger into powerful and frequently misunderstood art. In these moments, Straight Outta Compton places these songs in the context in which they were recorded and documents the effects– both good and bad–  they had on the culture at large. More and more people respond to the group’s message and many others fear and misunderstand it. As crowds for shows get larger and larger and so do the number of police waiting for the group at every turn. As N.W.A. get more well known for rapping against an oppressive police force, the police respond with greater oppression, Straight Outta Compton taps into frustrations of an entire culture over acts of police brutality and demonstrates the constructive and destructive ways that frustration takes shape.

This rage, fear, and theatricality of N.W.A. is expertly portrayed throughout. It’s easy for actors to become caricatures when embodying larger than life musicians (especially when some of them are still alive), and the nuances the principle cast bring to their roles is incredible. O’Shea Jackson Jr. does great work with the unenviable challenge of having to portray his own father, striking the balance between Cube’s dangerous stage persona and more introspective offstage demeanor incredibly well. Similarly, Corey Hawkins finds the relatable center of the pop culture powerhouse of Dr. Dre, making him the calming force between titans Ice Cube and Eazy-E (even as the role conveniently overlooks Dre’s notorious early assault charges). Jason Mitchell gets the most to work with as Eazy-E. The opening scene of the movie follows E at a drug deal gone wrong as, surprise, the house is raided with excessive police force (a tank is involved), and throughout the scene, Mitchell’s face is a mixture of effortless confidence, even as fear flicks through E’s eyes. It’s an all-star performance. With it’s three biggest stars taking the spotlight, other performances get pushed to the side, so don’t go into Straight Outta Compton expecting to delve into the psyche of DJ Yella (Neil Brown Jr) and MC Ren Aldis Hodge). 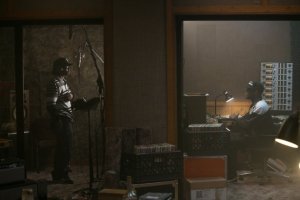 While Straight Outta Compton finds its greatest strength in the group’s heated heights of popularity, it loses steam and head into standard biopic territory as N.W.A. begins to drift apart. While the character interactions remain strong (particularly as diss tracks enter the picture), the movie loses focus as it gets caught up in contract disputes and in N.W.A’.s relationship with manager Jerry Heller (Paul Giamatti, apparently in his year of playing villains in music biopics between this and Love & Mercy). The singular focus the film had as the group had its encounters with LAPD gets lost as the movie sags a little in the middle. Luckily, the Bond levels of batshit villainy displayed by Death Row Records co-founder Suge Knight (R. Marcos Taylor) and cameos by other emerging rap legends (moments that elicited the kind of excitement and recognition usually reserved for Marvel movie Easter Eggs and name drops) keep things interesting even as the movie gets long in the tooth. Unaddressed, but prevalent in the film is N.W.A.’s notoriously poor treatment of women, with only two or three getting mentioned by name throughout and most others serving as props for party scenes. These moments leave a sour taste in the mouth and show some of the flaws in having two of the groups members produce the film. 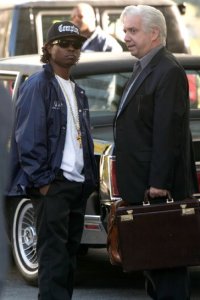 Universal Pictures, Legendary Pictures
Seriously, if you’re a musician and meet a guy who looks like Paul Giamatti, just don’t trust them.

Part of what makes Straight Outta Compton so magnetic is how uncomfortably familiar it feels. The rage felt by N.W.A. and Compton at large is the same rage felt by anyone whose turned on the news to new details of yet another shooting of an unarmed black man. In its most powerful moments, Straight Outta Compton provides a sense of catharsis for a problem that often feels painfully insurmountable. It’s a movie that’s strongest at its most political and weakest at its least. Much like the songs on the album the movie takes its name from, the lives of the members of N.W.A. are presented in a theatrical and exaggerated ways, but ways that are in the service of portraying thins that are unflinchingly real.

One thought on “A Bomb in the Lasagna: “Straight Outta Compton” is Best At Its Angriest”