There is something undeniably appealing about 80s pop culture.

Putting aside, for a moment, the complicated sociopolitical landscape of the 1980s, it is a decade that has been embraced purely on the level its cultural output. It’s easy to understand why: so much of it is the epitome of awesome, or at least of awesome as we use the word today. The decade gave us nostalgia-triggering video games, music being replicated across the spectrum now, movies being rebooted and sequel-ized with a fervor, and above all else, it was an era where a metal band could, in complete earnestness, shoot a music video of themselves fighting a horror movie icon with the power of rock. It is from this fertile nostalgic ground that the world has been given Kung Fury. 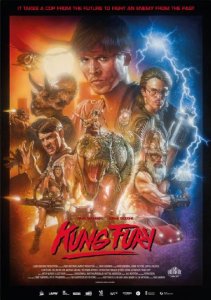 Funded via Kickstarter, Kung Fury is a focused 31 minute tribute to every aspect of 80s pop culture that could aptly be described as “rad”. Moments after a ninja murders his partner, a police officer (David Sandberg) is simultaneously bitten by a cobra and struck by lightning and is immediately imbued with Kung Fu powers. Revealed to be a chosen hero of lore by Shaolin monks, the cop returns to earth as Kung Fury and sets about using his powers to fight crime, particularly those caused by a time traveling Hitler (Jorma Taccone).

80s homage is big business, with the likes of the recently released  It Follows and Wolfcop tackling 80s movies in their own ways, with Kung Fury much more similar to the latter. Wolfcop, not unlike Kung Fury, is a tribute/parody of 80s straight-to-video cheese, but one that goes about its business differently. Wolfcop took the aesthetic and the production values of 80s STV releases and placed them in a modern setting, whereas Kung Fury sticks with the 80s trappings and ratchets them up to ridiculous levels. Kung Fury plays out like a series of absurdist versions of familiar 80s cliches: a tenuous grip of what hacking means allows a computer expert to “hack time” and send Kung Fury back to Nazi Germany using a Nintendo Powerglove, a band of street-thugs are massacred by an arcade cabinet turned killer robot, a gruff police chief forces the loner Kung Fury to take a partner in the dinosaur-headed Triceracop. In its dedication to presenting a kaleidoscopic mash-up of 80s pop culture, it creates something much more unique– and much funnier– than your standard throwback film.

The iconography of the decade is often played for laughs, or as is more often the case, for a knowing smirk. In Kung Fury, the insane, cartoonish heightening of 80s pop culture goes beyond knowing reference into something else entirely. The iconography is heightened to a degree so that it feels almost disconnected from the era with which its associated. The neon-lit Miami of the film is less of a portrayal of a past era and more of a separate world entirely. All this could be written off as a shallow fetishization of cultural touchstones, were it not for the genuine love with which Kung Fury portrays the 80s metal album cover panorama of, say, chain-gun wielding cavewomen leading our hero to a meeting with a giant, shirtless Thor. The parodies of things like Knight Rider and The Wizard within acknowledge the inherent ridiculousness in the (at times, not actually very good) source, but it never feels like its being made from a place of superiority. Films made with a disdain for the thing being parodied often have a mean-spiritedness that a light-hearted joke can’t mask (the Coen’s Hudsucker Proxy comes to mind) and Kung Fury simply wouldn’t work if it were made cynically.

Lampray, Laser Unicorn
At least one movie this summer is actually giving Thor something important to do.

Of course, aiding the film is its half-hour run time. At 31 minutes, the film hits all the comedic beats it needs without overstaying its welcome. Its a short packed with gags, both visual and spoken, and it moves at a brisk pace without a moment wasted. At even ten minutes longer, this could have been a slog, but writer/director/star David Sandberg keeps Kung Fury at a length that ensures all the comedic beats are hit and ensures that the short is eminently re-watchable.

Kung Fury has thrown down the gauntlet (or powerglove) for future 80s homages. It is the raddest film in a field where radness is the highest honor. Excessive in its imagery and incredibly restrained in its run-time, Kung Fury is the high-water-mark for movies striving for vintage VHS gold.

Kung Fury is free to watch on Youtube and Steam.