I have a pretty strong idea of what I think the future ought to look like, and a lot of it comes from the club scenes from Purple Rain.

Like the music of the music legend at its center, the movie Purple Rain is a lot of different things brought together: it’s in turn a feature length music video, a dream-logic romance, a gritty, urban psychodrama, and at times, broad vaudeville comedy (every scene centered on Morris Day and Jerome). It’s an ambitious, swing-for-the-fences film, but it’s arguably never more memorable and intoxicating than during the concert scenes filmed at the legendary Minneapolis nightclub First Avenue. It’s in the First Avenue scenes that Prince’s unrivaled energy and showmanship as well as the the unifying appeal of his music are best showcased. And whether Prince and director Albert Magnoli intended it or not, it’s here that Purple Rain depicts an idealized society.

Watch the opening scene set to “Let’s Go Crazy” and pay special attention to the crowd shots. They come at the viewer in rapid succession, but they leave an impression: teased hair, androgynous dress, makeup, piercings, and a whole lot of very different looking people. Like the song being laid down by Prince and The Revolution, the crowd is electric, wild, and notably diverse. There’s something alien and exotic in the First Avenue dress code, though it draws from familiar music subcultures. Vamping new romantics are packed in with brooding punks and hair metallers. Hip-hop attire shares a space with jazz-age-attired Morris Day and The Time and The Kid’s “Darling Nikki” costuming, which can most handily be described as a Soul Calibur character’s alternate costume. In a lesser film, this jumble of looks and cultures might reek of a casting director and costuming department clawing desperately at landing on something resembling “youth culture”, but in Purple Rain it feels deliberate and natural. As the outpouring of tributes from all walks of people in the wake of Prince’s much-too-early death attests, Prince’s music was made for all. Rockers and pop fans might have gravitated towards a song like “Computer Blue” for different reasons than funk fans, but all three can find something equally alluring in Prince’s genre-bending, gender-bending music and persona. I dare you to find another music film (or really any blockbuster film) of the era with a background cast as racially diverse and sexually fluid (there is a palpable and unchallenged queerness in the crowd at First Avenue)  as that in Purple Rain.

Warner Bros. Morris Day might have sucked all the character out his surroundings here.

As a result, it’s almost shocking how normal the world outside of First Avenue is. The Minneapolis of Purple Rain is all boxy buildings, conservatively dressed pedestrians, and shopping centers, and generally a world away from the hypnotic excess of First Avenue*. It’s much more uniform, and it’s far, far whiter. During the scenes out in the “real” world, it becomes clear: this diverse, unfettered, and wildly dressed culture is fostered by the club, and specifically by The Revolution (and sure, Morris Day and the Time). If there were ever a thesis statement for Prince’s career, it might very well be that. Over his nearly four decade career, Prince’s music and persona had an ability to draw out the weird, wonderful, and nonconforming that was perhaps only rivaled by David Bowie (and rejecting his name in favor of a symbol might give His Royal Purple Badness the leg up here). The performances by Prince & The Revolution helped bring Prince’s abilities as a performer to mass audience, and the crowd watching at First Avenue brought his mission statement.

Every now and again, a friend will ask me what fictional world I’d most like to live in, and while the Middle-Earths, the Hyrules, and the Star Wars galaxies of the collective imagination all make for tempting answers, since I first saw it, my answer has pretty much consistently been the First Avenue club as depicted in Purple Rain. Now, Minneapolis three decades ago is generally not the answer people expect, but it’s likely the truest. There’s an element of sci-fi to those club scenes because while it’s based on the popular music and cultures of the day, it feels like something that’s never truly existed. Purple Rain is giving the viewer not only a physical representation of Prince’s music looks like, but also a vision of the world as it could, and arguably should be. Purple Rain envisions a world where differences are not so much disregarded as celebrated, a world wherein differences in race, sexuality, and fashion are united by shredding guitar and funky bass and those haunting, lingering strings at the end of the title track. 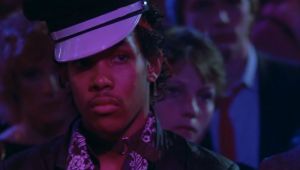 Prince is gone, but his music, and Purple Rain are still with us. These are divisive times, but they don’t have to be. Maybe this is the time we need to come together, to put on our ruffled shirts and denim patch jackets, throw on some music and get through this thing called life. Come on, let’s go crazy.

*The Prince-directed pseudo-sequel Graffiti Bridge, while decidedly less enjoyable, is interesting in how the stagey artifice of the exterior world and the club are more in-line, and both bear a striking resemblance to the sets of Joel Schumacher Batman movies.