Well, it’s good to be back. Yeah, but this post is, like, five days late. Is it? Or did I just decide to make Friday my review day? Tune in next week to find out. James, your illness and sunburn have driven you to the brink of madness. The people need answers now! Tell them to Google it. Madness, I say! 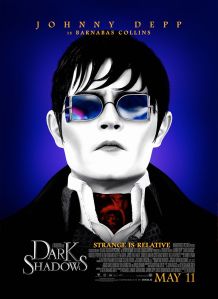 Warner Bros.
Depp is back, and paler than ever.

The Plot: Barnabas Collins (Johnny Depp), a young English businessman in 1700s America, is turned into a vampire by a jealous former lover (Eva Greene), who is a witch. After being imprisoned for 200 hundred years, Barnabas returns to find his beloved ancestral home in disrepair, and vows to help the remaining members of the Collins family rebuild their lost fortune. Also, it’s the 70s. Hilarity ensues.

I know that a fair amount of people had decided against seeing this, mainly because recent output by Burton, Depp, and co. has gotten a bit repetitive of late. Yes, Alice in Wonderland was pretty awful, and yes, the two do seem to be falling into a bit of a pattern—Depp dons white-face and wears a funny hat, while Burton throws Gothic imagery at us—but the duo’s recent films deserve more credit, and Dark Shadows should get a chance to get by on its own merits, such as they are.

Before I go on to why Dark Shadows is definitely more than half a good movie, let me straighten some things out, vis-à-vis Burton’s output in the last decade. We can all agree that Alice in Wonderland wasn’t a very good film. Hooray for getting along. That having been said, it isn’t Tim Burton’s fault. Alice is a Disney movie, through and through. It was manufactured to sell shit to tweens, and wears its Hot Topic heart on its sleeve. Hell, there’s even an Avril Lavigne song in the end credits. They just hired Burton for his name and some curly trees.

Once you get over that bump, was anything between Sleepy Hollow and Sweeney Todd really that bad? I wasn’t a huge fan of the latter—I hate Sondheim, and the ending could’ve used some work—and I seem to be one of the few who prefers Charlie and the Chocolate Factory to the Gene Wilder-starring original, but Corpse Bride was decent and I’ve heard great things about Big Fish. James, are you going anywhere with this? I’m getting there, disembodied voice. Be patient.

Anyway. I’m saying that as with any film, you should judge Tim Burton movies on their own merits. Sure, it’s also important to contextualize, but you can’t just write off a filmmaker because he likes to work with the same actors and use similar themes and aesthetics in his movies. Most of the best ones do. Besides, Burton’s greatest film was Ed Wood. That came out in 1994. Once you accept that, you realize that it’s better to appreciate his later films as quirky diversions, rather than to expect all of them to be on par with the best. Incidentally, check out my review of Ed Wood at the Hill News, if you don’t believe me.

Touchstone Pictures
A beloved director’s greatest film is about the worst director of all time? I’m sold.

Now that we’ve cleared that up. Dark Shadows is a surprisingly enjoyable film. It has much more character than Alice—which I will keep picking on forever—and that character manifests itself in less generically Burton-y ways than one might expect. One of the great things about Dark Shadows is that Burton dials down his own aesthetic to create a unique feel that’s much more suitable for the story he’s trying to tell. The Gothic elements feel grounded in reality, even if that reality is filtered through a cheesy soap opera lens. That lens would be a bad thing in most movies. Here, it just means that the film knows its roots. For those few of you not aware, Dark Shadows is based on a 70s soap opera of the same name.

Not all of the soap opera throwback stuff hits the right note, but when it does, man does this movie sing. While the trailers made a lot of the fish out of water stuff look cheap, Barnabas’ efforts to figure out this new era are often genuinely funny. Depp’s performance hits the perfect combination of warm and aloof, goofy and dignified that was absolutely necessary for this movie to work.

Wow, James. You’re making this movie sound great. Oh, I am? I’m not doing my job, then. Because as much as I enjoyed watching Dark Shadows, it had almost as many fundamental flaws as my ex-wife. Zing!

Depp and Burton both performed their parts admirably. Depp especially. But that level of pleasantly surprising quality isn’t present in every facet of the film. There’s a love story that is woefully under-developed, and Barnabas’ feud with the witch gets stagnant pretty quickly. They fight and have sex in ways that I can only assume are meant to be passionate, but Greene’s character is so shallow—in terms of writing, anyway. We don’t know that much about her feelings—that their bickering is rarely anything more than an unwanted distraction from Barnabas’ tumultuous relationship with the 70s, or his efforts to become a decent family man in spite of his curse.

The rest of the supporting cast is good, although whoever did Helena Bonham Carter’s costumes made some really unflattering choices. On top of that, even at her alcoholic, sarcastic best, Carter’s character is underused, which brings up one of the main problems I had with this movie: it happens far too often that genuinely interesting character relationships are undermined for the sake of moving the plot along. For this I blame screenwriter Seth Grahame-Smith. It’s the Pride and Prejudice and Zombies author’s first film, and it shows.

Warner Bros.
“Yeah, I didn’t think the kid would win either.”

Aside from the fact that plot threads seem to come and go in a knitter’s first sweater type formation, the film’s most heinous crimes occur in the last twenty minutes, in which a lot of things happen and nothing much happens at all. The former is explained by a bunch of last-minute revelations—somebody’s a werewolf! Deal with it!—and the latter comes in the form of a pretty lame final showdown. Dark Shadows does something that has always bugged me in superhero movies and sci-fi action flicks: it introduces a villain so obviously powerful that she can’t possibly lose, and then has to waffle around so that she does. Her magic is endless and her determination is fierce enough to sustain her for 200 years, yet this witch is somehow incapable of doing things like kill an aging, shotgun-wielding Michelle Pfeiffer, or even a small child. The fact that we know none of the main characters will die means that there’s no dramatic weight to any of her actions.

There are a lot of moments where that happens—the film has to restrain itself in order to fit the confines of its own plot. A more experienced writer may have taken more risks or cut out a few plot strands, but Grahame-Smith has a ways to go. As a result, Dark Shadows is a very uneven film. Fortunately, it has much more character than Alice in Wonderland, and the things I liked made up for the last twenty minutes. All in all, it’s a pleasant way to spend an evening, especially if you don’t go in expecting Ed Wood.