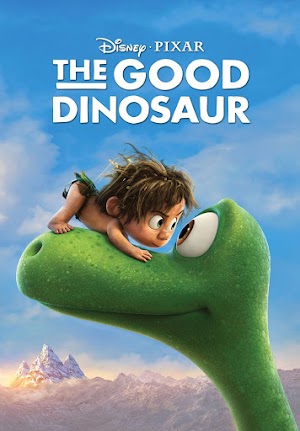 To be honest, I’m not sure how to feel about The Good Dinosaur. I really adore Pixar films, and this movie has everything all Pixar films have: a unique setting, not normally sentient beings having sentience, some emotional tragedy, and all the Pixar/Disney tropes one can think of. However,  this is the problem with The Good Dinosaur. It was TOO Pixar. It contained so many Pixar/Disney cliches making it feel stagnated, predictable, and over-done. I couldn’t say I disliked the film. If anything I would say that The Good Dinosaur was disappointing, because it didn’t really hold up to the standard that most Pixar films set.

I’ll start by providing the premise of the film and the main tropes that go along with it. I must warn that, unlike most of my articles, this one does contain a large number of SPOILERS. But I am only doing so because they are necessary to make my point (also it allows me to put all those hours getting lost on TVTropes.org over the years to good use). So, moving on.

The Good Dinosaur takes place in a world where dinosaurs are the dominant species and have mastered agriculture and domestication of livestock. Humans, on the other hand are like dogs, I guess…? Anyway, the story is about a nervous and cowardly young dinosaur named, Arlo (Raymond Ochoa) who gets lost and has to find his way back home with the help of a young caveman (caveboy?) whom he names Spot (Jack Bright). The journey he makes packs a bunch of different plot tropes into one film. It’s part epic journey, part Western, part boy-and-his-dog film (only replace “boy” with young dino, and “dog” with feral human child). Within these familiar premises, we have familiar scenes. There is the meeting of strange friends and enemies that are common in epics. There’s a campfire scene, complete with story telling and harmonica (grasshopper?) playing. And of course we have to have the scene where the “boy” has to let his “dog” go in a tearful manner. Here we have a clear case of Homer’s The Odyssey mixed with John Wayne mixed with Air Bud. So Pixar is being unique in mixing all these genres together, while at the same time taking a cavernous dip in creativity by using every cliche possible from said genres.

Pixar Animation Studios
In this universe, T-rex are cowboys.

The Good Dinosaur did not just rip off scenes from other film genres, but it also ripped off its own studios. A big example is how it handled death. Early on in the film, Arlo’s dad gets Mufasa’ed off. I use this particular euphemism to emphasize the death’s connection with the famous death in The Lion King. Even the camera angles seemed similar in the scene. But instead of dwelling on the death at all afterwards, the scene just cuts to a grave and then the characters doing farm work. Pixar’s other first-10-minute-deaths, such as those in Finding Nemo and Up were much more impactful and masterfully done, and gave us more of a look into our character’s motives and psyche. Arlo’s father’s death in The Good Dinosaur just seemed like a cheep way to make the audience more involved, and based on how things go in the rest of the film, there didn’t seem like there was much reason for the death other than to just try to make us sad. And to get back to The Lion King similarity, there is even a scene later on where the son sees a vision of his father who helps him realize his destiny and what he has to do. Another issue I had is that Arlo has plot armor so thick that he is able to survive the very thing that killed his dad, twice. In addition to this, he manages to walk away from several steep falls, a situation in which his foot is stuck underneath a rock which he cannot remove, and of course, with the film’s river theme, a drop off of a waterfall. The final trope, which I think I have the most issue with because it has been done to death (pun very much intended), is the classic trope where the movie tries to make it seem like a character is dead at the end, but wakes up at the last minute. This trope is so common in Disney and Pixar movies that TV Tropes literally calls it the “Disney Death“. Seriously! We know that they are going to live! Stop trying to trick us with this!

While this film does annoy me with its smorgasbord of cliches, there are some good things to say about it*. Perhaps the best thing about the film is that the animation is freakin’ amazing! I mean, Pixar normally does great animation, but the animation in The Good Dinosaur is on a whole other level. Especially with its background and landscape scenery. The water in the film looks like actual water. The rain, the trees, and the mountains look so real! The scenery is drawn so realistically, it feels almost as if I could walk into the screen. If anything, I recommend watching the movie just to look at it!

One could argue that the unique blend of genres and stories is effective in creating a never seen before setting. The whole idea of the human, Spot, acting like a dog, is also interesting. These things help distract from the done-before premise of the story. I really dislike being this harsh on the film, especially since a small part of me likes Pixar so much that I feel bad bashing a film from its studio. Especially one so beautifully animated. But if I am to be truthful, it is the first time Pixar has disappointed me in a film. To be clear, I define “disappointed” to mean at first expecting something greater, and then not meeting those expectations. For example, I didn’t think the Cars films would be as great and thought they would be more purely comedy, and then I got what I was expecting. But the beautiful trailer of The Good Dinosaur as well as how the film’s creators seemed to talk about the story, made me feel like it had a lot more potential than what I eventually ended up seeing. Unfortunately, it was the sort of story that I’ve seen a million times before, and the plot and the film remains predictable, redundant, and hackneyed.

*There was no reason for me to add this little tidbit in the article, but I still feel it needs to be said, simply because it was a small detail in the movie that made me more happy than it probably should have. And that is that velociraptors in this film are portrayed with feathers! Which I believe is the first movie instance in which this is the case. So historical/biological accuracy for the win!