James, where have you been? Do you have any idea what time it is? Okay, I know it’s late, but—Late? This review is so late that I thought you were dead! Really? No. It is late, though. Thanks for pointing that out. Any time. 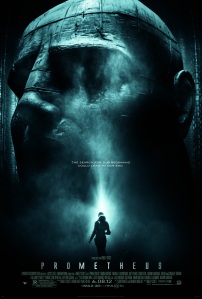 The Plot: Some naïve scientists (Noomi Rapace and some other guys I guess), an android (Michael Fassbender), and two competent people (Charlize Theron and Idris Elba) go to space. Why? Because they want to uncover mankind’s origins. This is a pretty heavy task, and not everybody thinks it’s possible, or even such a great idea. Which, let’s be honest, it kind of isn’t. They find scary things, have a few laughs, set some people on fire, and learn a little something about themselves, and about the purpose of humanity.

Prometheus asks some big questions. Where did humans come from? Why are we here? Whether or not it answers them has been subject to debate. I think it does. As much as it needs to, anyway. Because this isn’t a movie meant for children—although I do look forward to the junior novelization—Prometheus implies more than it tells us. We meet our maker (maybe?) in the first scene of the film. A pale, muscly humanoid dissolves itself above a waterfall, and we see strands of its DNA evolving. The implication is that we’re witnessing the creation of all life on Earth by an extraterrestrial being. 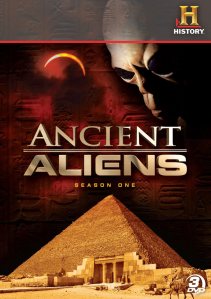 Prometheus Entertainment
They were right all along.

Later in the film, the characters discover an installation on a far off planet, apparently once manned by these same beings. They also come across some pretty scary shit, and the way that scary shit plays into the discovery of mankind’s purpose is even more terrifying than space cobras and rape imagery. Which is pretty damn terrifying.

As these discoveries are made, Ridley Scott and cinematographer Darius Wolski use the stunning scenery to full effect, mixing a sense of wonder with ever-mounting dread. But we all knew this movie was going to be pretty and well-directed. Much of the criticism has been going to screenwriter Damon Lindelof, because he’s from New Jersey. This criticism, if you’ve ever been to Jersey, is fair. It’s also irrelevant.

Many critics have observed that characters in this film do stupid things without thought of consequence, sometimes with no reason at all. This is hard to argue with, but easy to explain. You’re going to say that it’s because they’re scientists, aren’t you? It’s like you read my mind. Ha.

There’s a scene in the film in which a grown man in a scary cave cheerfully reaches out to pet a space cobra like it’s a goddamn kitten. Before you ask, yes, somebody could be that stupid. The man is a Scientist. I’m not saying that scientists are in any way lacking in intellect, or that I’m better than them because I’m a writer. I am, though. I’m just saying that scientists are among the universe’s dumbest smart people. My understanding of scientists is that they’ll do anything, no matter how dangerous or immoral, if it means making that world-shaking discovery or scientific breakthrough. 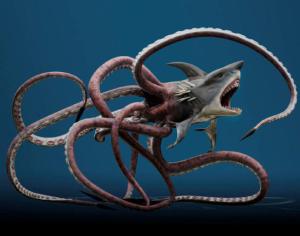 But James, for all the shit this movie’s been getting from the internet, surely you can’t explain away every criticism? You’re right, disembodied voice. There’s plenty more to talk about.

The main character is kind of bland in the first act. Her relationship with her annoying-as-hell boyfriend never really leads anywhere. Even his SPOILER?!? death is a moment of character development for someone else. At first, it seems like Elizabeth Shaw will be just another forgettable sci-fi protagonist. She’ll stumble around until bad things happen, either to her or the rest of the crew. She will mention science every now and then, and maybe religion to add an extra dimension. Fortunately, Noomi Rapace manages to make the role her own, even when the script doesn’t give her much to work with. And when shit gets real, Elizabeth does grow. Both the script and Rapace draw out the character’s inner strength as she finds out just how naïve she really was. 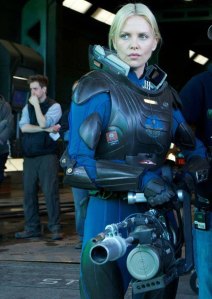 Twentieth Century Fox
Ignore the thoughtful crew member in the background. What’s he thinking about, anyway? That’s Charlize Theron. With a flamethrower.

While I wasn’t completely won over by the main character, a few of the tertiary characters are almost frustratingly engaging. Charlize Theron’s Meredith Vickers, for example, starts out tough and pragmatic and is slowly humanized as she makes the difficult decisions of a leader. A revelation about Vickers in the third act isn’t handled all that well, and she kind of gets screwed over as Elizabeth Shaw gets her shit together. Between this and Snow White and the Huntsman, though, I’m beginning to get a crush on Charlize Theron. Here, she gets a chance to play a character with some real depth. Vickers is tough and cold, but the look of horror on her face when she needs to set a man on fire speaks volumes. It’s a great moment. One of many, in fact, that the film doesn’t really go anywhere with.

Michael Fassbender, to the surprise of no one, gives a fantastic performance as David the android. He plays David with just the right amount of wrong. The character doesn’t feel quite human, but there’s something more there. Moments of almost-feelings, where you begin to wonder if a machine really can have a soul. When everyone else is in stasis, or cryo-thing, or whatever, David wanders around the ship, looking after things. He dyes his hair to match Peter O’Toole’s in Lawrence of Arabia. He also quotes the iconic “the trick is not to mind that it hurts” line. There’s a significance there that the film never fully explores. I look forward to seeing what they do with that in the inevitable sequel. Maybe Ridley Scott will just tie it in with his Blade Runner sequel, if that’s still a thing. God, I hope not.

Prometheus is a film that’s both harrowing and thought-provoking. The cast—aside from Logan Marshall-Greene, who just rubbed me the wrong way—is perfect. The script has a few missteps, and it’d be nice to see a different writer if they decide to go for a sequel. But when it comes to the “big questions,” the film delivers. Ultimately, we know as much as the main characters do. Some people see that as a bad thing. I don’t. It just means that we, too, have to think about the information we’ve been given. By the end of the film, the significance of the human race and the accountability of its creators is largely a matter of faith. That’s not bad writing. It’s a message.

2 thoughts on “Review: ‘Prometheus’ Is Much More than the Sum of its Flaws”