– You can’t find out everything from books, you know.

– I think I read that once.

The Secret of Kells is a refreshingly unique animated movie about a young boy who gets help from a fairy while attempting to create a book “that can turn darkness into light” amidst the threat of viking attacks. This French-Belgian-Irish film borrows its tale from the history of The Book of Kells, which is a national treasure of Ireland, and one of the oldest and most beautiful books in the world. It also combines pieces from Irish mythology as well as insular art to add to the fairy-tale nature of the story. Like the original Book of Kells, The Secret of Kells may also be an artistic treasure of Ireland.

The film tells the story of Brendan, who has never stepped foot outside the walls of his abbey due to the strict and protective nature of his uncle, Cellach. Much of the conflict stems from Brendan’s curiosity and hopes of becoming an illuminator, clashing with Cellach’s insistence on making a wall to protect the Abbey of Kells from attacks by the “Northmen.” When a famed illuminator, Brother Aiden of Iona, comes to the abbey with a very special book and asks Brendan to help with its completion, it leads Brendan to find adventure outside of the abbey’s walls. In the forest he meets a fairy called Aisling, who helps him learn and discover more than he could imagine. 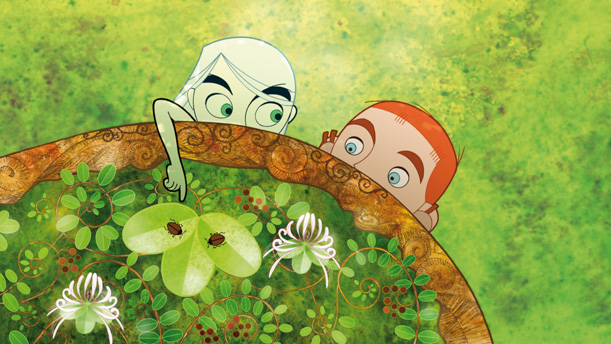 StudioCanal
Aisling (left) teaching Brendan (right) about the forest. “One beetle recognizes another.”

The movie works extremely well as a fairy tale, mixed with a coming of age type of story, with some generational conflict thrown in. In addition to this, it has quite a bit of religious connotation, since the actual Book of Kells is a bible. Brendan also often scoffs at Aisling’s worries about an ominous entity in a dark part of the forest, as “pagan nonsense.” The religious aspects fit in well, being used as materials for the setting, like beautiful flourishes added to the story design. However, religion is in no way a main part of the film, as the themes have more to do with discovery, curiosity, and wonder. It puts a lot of importance in learning, and finding one’s own path and coming to one’s own conclusions about things. It is kind of a depiction of childhood and how conflict and adult troubles get in the way of that, as seen by the clashing ideals between Brendan and his uncle.

StudioCanal
Brendan (right) and his uncle, Cellach (left) in Cellach’s room, with a map of the abbey surrounded by a wall on the floor. The scenes taking place here are particularly jarring, visually, and juxtaposes the stances of the two in the room.

Just as the story is beautifully told, the visuals are brilliantly presented. Since this film is about the Book of Kells, it uses the style of artwork that the book is famous for, known as insular art. Insular art, and thus the Book of Kells itself, is noted for its vibrant colors, minute details, and of course Celtic knots. The entire film borrows heavily from this style, so it is as if the artwork has leapt straight from the pages of the Book itself! As someone who has seen the Book of Kells in person, I can tell you that The Secret of Kells emulates the art very well. This type of art gives the film a very dream-like feel, and it is very good at directing the viewer’s eye to where it wants you to look. Some of my favorite scenes employ the use of not only insular art, but also the Gaelic language and pieces of Irish mythology. For example, the Gaelic proverb “one beetle recognizes another,” which means something along the lines of “it takes one to know one,” is used during the scene where Brendan and Aisling are befriending each other. Another scene includes an English-mixed-with-Gaelic song, where Aisling uses Aidan’s cat, Pangur Ban (itself named after a Gaelic poem) to help Brendan. And finally, the climactic, meta-physical battle between Brendan and the dark god, Crom Cruic, is aided in its epicness through the use of insular art.

StudioCanal
The “Chi Ro” page of The Book of Kells, as seen in the movie (left) and real life (right).

There is so much to be said about this film, and I have nothing but praise for it! In short, I love this movie to bits! I highly recommend it, especially to film, art, and history buffs, as well as fairy tale/fantasy lovers. There was so much thought and care put into the creation of this story and its art, making it a masterpiece to behold.

If you want to know more about the history of the Book of Kells and its connections with the movie then check out this informational video. But view at your own risk because it contains SPOILERS: https://www.youtube.com/watch?v=XbqhU262qdc