Welcome to Saturday Morning Cartoons, a new column where we will discuss animated films and tv shows.  I am your writer, Aubrey Fox, and I sincerely hope that you have a pleasant time here at Rooster Illusion, if not an interesting one.  Let’s begin this column with an opening theme to a show I very much enjoy. Maybe you’ll enjoy it, too

Led through the mist,
By the milk-light of moon,
All that was lost, is revealed.
Our long bygone burdens, mere echoes of the spring,
But where have we come, and where shall we end?
If dreams can’t come true, then why not pretend? 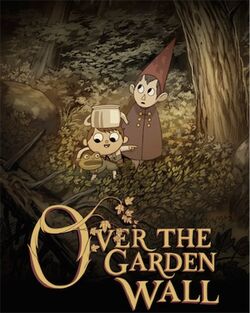 You are greeted by these sultry lyrics of a song that opens the first chapter of the Cartoon Network animated mini-series, Over the Garden Wall. They well represent the foreboding nature of what you are about to see, but also provide a bit of fantastical curiosity that the show presents. Airing in November of 2014, this show’s 10 chapters, of roughly 11 minutes each, could easily be viewed in one sitting, and is well worth your time. It keeps a rather episodic nature, with each chapter telling a simple campfire-style story, while an overarching tale unfolds. Over the Garden Wall is about two brothers who are trying to find their way through the woods called the “Unknown.” However, the story is so much more than its simple plot suggests, and will tug at your heartstrings in ways surprising for such an unassuming show. The characters are well developed and memorable, and voiced by talented actors.The art is fairly generic, but borrows a lot from many great animation legends, and the creators certainly know their classic films. The overall mood of the story is relatively dark with splashes of fun, song, and whimsy. The best way I can describe the feel of this show is if perhaps the Brothers Grimm wrote an Adventure Time episode. It is a show befitting of today`s quirky cartoons, yet the type of story it tells is derivative of older classic fairly tales.

Our two main characters are the teenaged Wirt (Elijah Wood) and his much younger brother (technically half-brother) Gregory (Colin Dean). Wirt is pessimistic, jumpy, and quite a pushover. He rambles incessantly about the things that could go wrong, while also occasionally reciting small bits of woeful poetry. Greg, though the younger brother, seems a lot more emotionally capable regarding their situation. He is a small optimistic ball of sunshine who doesn’t seem phased in the slightest of the terrifying aspect of their journey. Much of his dialogue includes giving out false facts (“that`s a rock fact!”) and talking about his ever-present pet bullfrog whose name changes by the episode. The first chapter in, they are warned by a woodsman (Christopher Lloyd) about a dangerous presence in the Unknown called the “Beast.” Afterwards they are joined by a talking bluebird, named Beatrice (Melanie Lynskey) who agrees to help them find the good lady of the woods “Adelaide of the pasture,” who may help them find their way out of the Unknown. The characters themselves are fun and interesting, but the voice actors really surprised me, especially Elijah Wood as Wirt. He did a good job of taking on a role a bit different from what I normally see him doing. He masked his voice quite well, so I never felt like I was listening to Elijah Wood, instead I was listening to Wirt. Christopher Lloyd was a great addition as the woodsmen, having just the right amount of crazy paranoia in his acting. In addition to these great talents, many guest voices also appear throughout the series, including John Cleese and Tim Curry.

Each episode, or “chapter,” encompasses a story telling of a different person or group that the brothers meet and interact with. They play out like a fairy tale or fable with some sort of surprise or neat wrap up at the end. Yet despite its episodic nature, each story connects and furthers the development of the characters and the plot. Each is necessary in letting the viewer get to know the world that the brothers have wandered into, telling us the most important thing about it: that all is not what it seems to be. The darker and unsettling mood carries throughout the show and intertwines all the mysteries that it is keeping from the viewer. Even simple details makes the viewer question the very nature of this world. How did the brothers arrive in the Unknown? What is the Beast? Why is Greg wearing a teapot on his head? What era does this story take place in?  This last question actually nagged at me a lot while watching the series. The clothing style, technology, and setting seem to suggest something of the Gilded Age or Antebellum Era, yet the brothers have knowledge of telephones, “the dinosaurs,” and often use modern era anachronisms. At first I thought it was the creators’ way of relating more with a younger audience, but with the bizarre nature of the show, I was never sure.  As we get closer to the end, the atmosphere becomes darker in tone and the revelation of how this whole story started out really shocked me. I was surprised that something of this nature was put on a kids channel, but also impressed with how well it was put together. It does an excellent job at giving away pieces of the puzzle, but providing no way to put the pieces together until the very end.

The music is another joy of watching Over the Garden Wall. Nearly every episode features a song or two (or more) and the musical choices are rather folksy and old fashioned, including the use of opera singers – a fairly strange, yet pleasantly unique choice for a Cartoon Network show. The timing of the songs don’t feel forced or unnatural like a musical, and instead adds to and fits in well with the current situation. The songs feel like they belong in this world and its time period (whatever that may be) and are not attempting to cater to a modern audience. They also set the mood and foreshadow events to come, especially those in chapter four, “Songs of the Dark Lantern.” Whether it’s the joyful “Potatoes and Molasses,” the surreal “Highwayman Song”, or the haunting “Come Wayward Souls,” you will enjoy simply listening to this show.

Not only do the creators of Over the Garden Wall seem to know their music, but they also appear to be encyclopedically versed in animation. This makes watching the series an absolute treat for a classic animation buff like me. The art style is relatively modern and generic-looking, but adds certain details that make it look like it could have been made in the early 20th century. Even if you are unfamiliar with older animation, there is a nostalgic and timeless feel to the show. The lighting and shading set the mood rather well and the backgrounds have a painted-on-canvas texture to them. The colors have an autumnal palette, yet they get darker and more wintry as the show continues on. Furthermore, if you look closely, you will notice that the frames encircling the shots are ever so subtly blurred, giving them a vignette-like presentation and a dream-like feel. Many episodes and scenes are reminiscent of classic cartoons or films such as Scooby Doo (Chapter 3: “Schooltown Follies”), Betty Boop (Chapter 4: “Songs of the Dark Lantern”), Spirited Away (Chapter 7: “The Ringing of the Bell”), and The Wizard of Oz (Chapter 8: “Babes in the Woods”). Many of Greg`s antics also have a 1930’s/40’s Looney Tunes or Merrie Melodies feel to them. At the same time, none of these references are extremely in your face about it. I have found that a lot of humor in today`s media involve geeky nods to the audience that are sometimes too obvious, putting a pause on the action – just a shy away from breaking the fourth wall and saying “see what I did there?” I do like these clever nods, but it is refreshing to see a cartoon do this in a less obvious fashion, by just paying simple homages to film greats. It’s never asking for the audience to notice, but just leaves the original inspiration, and if you happen to see it, then that`s a plus.

With these fun details, small foreshadow-y hints, and the relative shortness of the show, Over the Garden Wall‘s re-watch value is very high. Upon watching it again, you can catch parts of the mystery that you may have missed the first few times around. The ending also leaves the viewer with a question and multiple ways one can interpret it. I really love shows and movies that when you watch it again, you experience it in a different way, and Over the Garden Wall certainly meets this goal. It is very rare for me to watch a show in which I can see no flaws, but there were no major problems that I could find with this series. The fearlessness of the creators to do something unique and outside the box, the intelligent use of its medium, and the masterfully told story makes it one of the best things I’ve ever seen on Cartoon Network. It puts its story together well with a dark and thoughtful mood and setting, and is a wonderful fairy tale to get lost in over and over again.