When looking at the type of cartoons I watch, I tend to prefer shows that have overarching stories, and deeper character and plot development. I dislike mostly episodic cartoons or purely comedic shows. The 2013 cartoon Wander Over Yonder is both of these. Let me stress that I am extremely picky about comedy, especially in cartoons, which generally cater to a younger audience and often consist mainly of fart jokes and the like. But this show managed to keep me coming back and wanting more. It also kept me laughing. This is probably attributed to the show’s creator, Craig McCracken, who has made some classic Cartoon Network animation greats such as The Powerpuff Girls, Dexter’s Laboratory, and Foster’s Home for Imaginary Friends. His comedic style and animation/character design really come across in this cartoon.

The plot revolves around the main character, Wander (Jack McBrayer), and is best friend and trusty steed, Silvia (April Winchell), as they travel across the galaxy helping others have fun in the face of the evil planetary conqueror Lord Hater (Keith Furguson), and his right-hand henchman, Commander Peepers (Tom Kenny). Most episodes either focus on Wander and Silvia’s friendship, or Wander’s comedic attempts to befriend Lord Hater, despite Hater’s… well, hate. The show sits solidly in the space western genre, and our little space cowboy, Wander, is complete with a southern accent, large (and magical) hat, and a banjo. I thoroughly enjoyed Wander’s optimistic and helpful character, and the person who lent him his voice, Jack McBrayer (think Fix-it Felix), works perfectly with his positive behavior.

The fact that the show literally had me laughing out loud at some points really impressed me. From character humor, to situational humor, to referential humor, it was quite varied in its ways to make the audience laugh. It also included a smattering of fourth wall breaks and meta humor, including an episode where these cartoon characters themselves attempt to make a cartoon in a He-man-esque style. The show also seemed to be trying to see how many Star Wars references it could fit in, and includes gratuitous use of the Wilhelm Scream.

I can see how Wander’s personality may annoy some, since he often seems almost too happy and unfazed by certain events, but the show is good at pointing out the flaws in Wander’s friendliness and even making fun of them. For instance, an entire episode involves Wander attempting to buy Silvia a drink, but his obsessive need to help people keeps distracting him from doing so. In one episode, Lord Hater uses Wander’s obsession to help others, in order to lure him out of hiding. I love pretty much every interaction between Lord Hater and Wander. Most of the time Wander simply annoys the baddie into submission. Lord Hater’s crazy reactions and inability to deal with Wander’s incessant kindness are hilarious. The below clip essentially sums up their relationship:

Many of the episodes have common set-ups seen in other series’ such as a time travel episode, a musical episode, a holiday special, and an episode where Wander is split among the various aspects of his personality. But even these, though cliche and trope-y, manage not to feel tedious and overdone, and instead bring in some new humor, and even add to the story itself. The time travel episode shows a snapshot into Wander and Silvia’s past and develops their friendship. The musical, which is a type of episode that is often relegated to a random fun episode in most other series, actually has a great bearing on the overarching plot of the second season. The holiday special is brilliant, because it tells the same story, but from different viewpoints. The part that is from Wander and Silvia’s point of view is played out like a Christmas special, while the part from Lord Hater and Commander Peepers’ POV is like a Halloween special. The episode with Wander’s split personalities, appropriately named “The Wanders” is actually one of my favorite episodes of the series. It hits the warm fuzzy points of his and Silvia’s friendship, while also adding more to Wander’s character, and wrapping it all in a series-defining quote – “The helper seeks to help, because he knows what it is to be helpless”.

Wander Over Yonder is a delightful romp through the galaxy, yet it has certain moments and episodes that covers a spectrum of emotions. In the second season, which becomes slightly more serious, they even have a rather depressing episode (The Bot), and even one that hits the hard to portray feeling of bittersweet (The Flower). The episodes that focus on Wander and Silvia’s friendship, are the ones that I enjoyed the most. The two are very different, but I love how they play off of each other. Lord Hater isn’t the only one who often gets annoyed at Wander, since Silvia, too, often dislikes how Wander attempts to handle certain dangerous situations. Unlike Wander, Silvia doesn’t mind being combative, and she’s often the one to fight off Lord Hater’s henchmen and get Wander out of trouble. Despite these differences, the two would do anything for one another. Not many cartoons, or entertainment media in general, focus so much on the friendship between opposite gendered friends. Few have male and female leads where there are no romantic tones. But Wander Over Yonder pulls this off well. Wander and Silvia often say “I love you” to each other, but keep it in a completely platonic way. I can’t think of any other show or film, cartoon or otherwise, that does this or portrays a friendship like this without eventually including a certain amount of romantic tension. Why is this such a unique and unheard of thing? 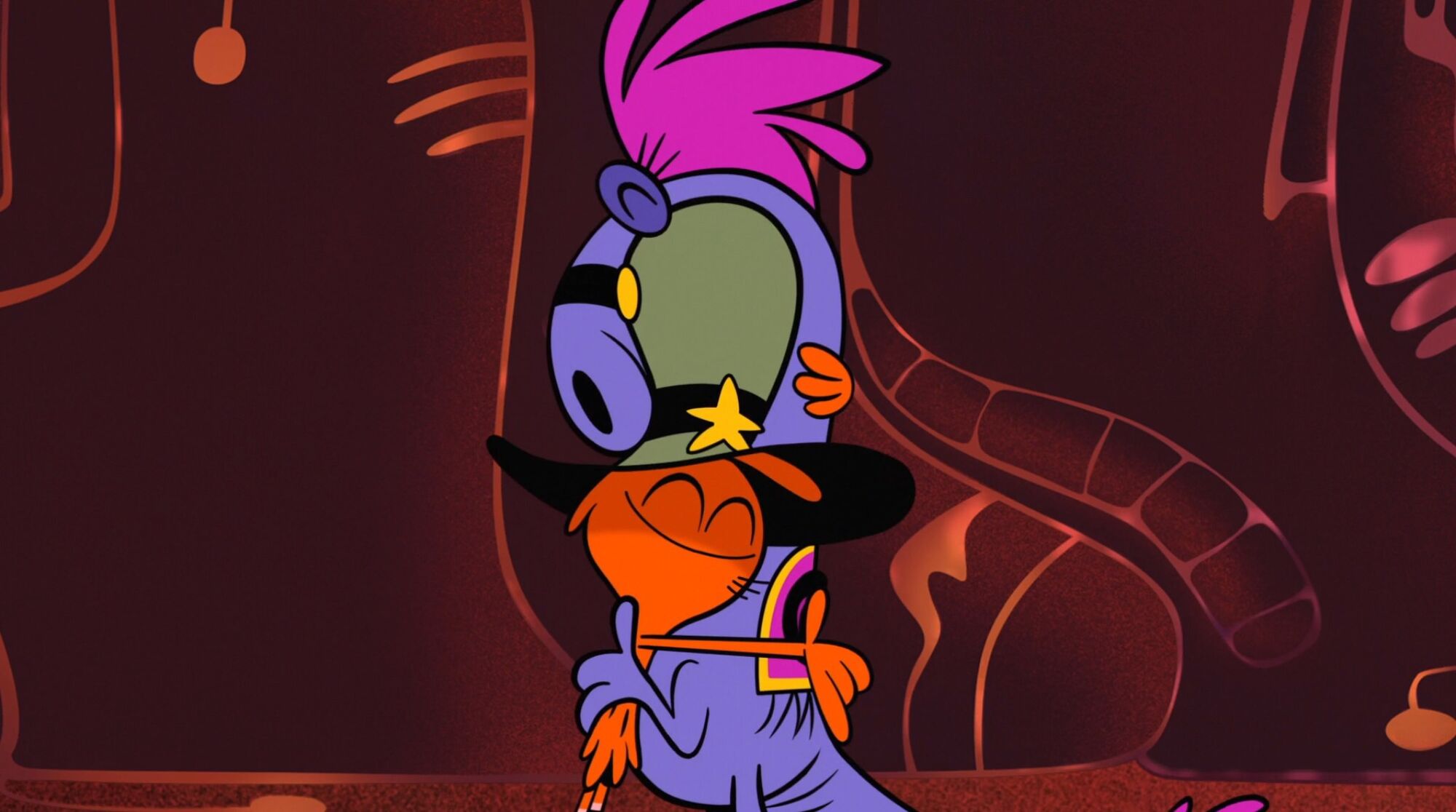 Wander Over Yonder has recently finished its run, sadly prematurely. The series ends on a mostly conclusive note, where one would not realize that the show was canceled without having been told so. But if this series had continued beyond its two season stretch, I would certainly have watched more. Colorful, fun, and with excellently timed comedy, Wander Over Yonder is a continued example of Craig McCracken’s cartoon creation skills. If you are looking for a lighthearted, yet heartwarming comedy, then this show is for you.