I know this is more of a belated love note, but I was sick with the flu the week of Valentine’s Day, and was unable to articulate my love for this cartoon short at that time. The idea behind this article came from A Bomb in the Lasagna‘s article on Bill and Ted’s Excellent Adventure and Second Breakfast‘s article on The Wrong Trousers, both written last year. Basically, instead of focusing on romantic tropes or romance genre film (which I tend to dislike anyway), I’m doing an article on a piece of animation that I’d like to profess my love to. Enjoy!

More than Japanese anime, more than Disney or Pixar films, what was probably most influential in making me love and appreciate animation were Bugs Bunny cartoons. This may sound strange, because as an adult I tend to gravitate towards film and shows that are deep, thought provoking, and have much more intricate plots beyond simple comedy, but sometimes the simple basics are all it takes to make something great. Classic Bugs Bunny cartoons of the 40s and 50s were brilliant in their simplicity, and could create a full story with understandable characters and timeless humor in their short six to seven minute span. To this day, I can look back at classic Merry Melodies and Looney Tunes cartoons and say with certainty that it is those animated shorts that got me into animation, and they are without a doubt still the most skillful and hilarious examples of animation out there. And one Bugs Bunny cartoon in particular has branded itself on my heart as my favorite piece of animation ever  – Little Red Riding Rabbit directed by Friz Freleng. 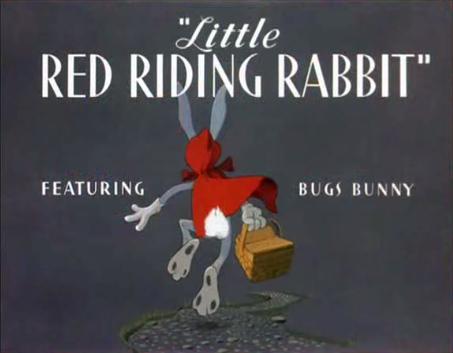 Just thinking about Little Red Riding Rabbit puts a smile on my face. As the name suggests, this seven minute short recounts a Looney Tune-ified version of the story of “Little Red Riding Hood” in which Bugs Bunny hijacks the plot. In this incarnation of the classic fairy tale, the Big Bad Wolf isn’t actually interested in Little Red. Instead he wants to eat the rabbit that she brought for her Grandma “TA HAVE!”, namely Bugs Bunny himself. What follows is your classic Bugs Bunny run around of the Wolf attempting to eat the rabbit, with Bugs outsmarting him at every step. Sounds like a pretty standard Bugs Bunny cartoon, right? What sets this one apart for me is how memorable it is – from the characters to the gags to the ending, it certainly sticks out from the hundreds of other Bugs Bunny cartoons.

First the cast: Red is the first to appear on screen, and boy does she make an entrance. Voiced by Bea Benaderet, famous for her roles as Granny from Sylvester and Tweety cartoons, and as the first voice of Betty Rubble from The Flinstones, she is given a very unique voice that you can never unhear – even if you want to.* She enters the story skipping to her Grandma’s house singing “Five O’clock Whistle” in a loud and grating voice. She is delightfully annoying. I don’t know how that is possible, but her voice is so distinct and humorous that it adds to the joke rather than retracts from it. Her initial interaction with Bugs, clueless to the fact that she is conversing with the very rabbit she plans to give to her Grandma, sets up the fact that she, like most Looney Tunes extras, and like most Red Riding Hoods, is incredibly dumb.

Then we have the Wolf, who is your classic Looney Tunes villain – not very bright, but having a clear goal of wanting to eat everyone’s favorite bunny. He is closer to the Daffy Duck sort of Bugs Bunny antagonist – just coherent enough to think he’s in control, while not actually being so in the slightest. His introduction of sneaking into Grandma’s house and booting out a group of other wolves lying in wait, yelling “this is MY racket”, is a wonderful joke to set-up his character and to nod to the audience on how much this Red Riding Hood style trope has been done to death. Throughout the short he is constantly interrupted by Red in his schemes, and his growing frustration of her obnoxiousness is priceless.

Finally we have our hero and carrot aficionado, Bugs Bunny. As per usual, he’s always one step ahead of everyone else. He’s clever enough to understand human (or wolf) nature, and puts that to use. One of the more enjoyable things about this cartoon is that it is one of the few times where even Bugs himself gets annoyed. Usually he is in control throughout the cartoon. Yes, there are instances where he is frightened or surprised, but it is one of the rare instances where he loses his cool. It’s interesting to see Bugs in a more human (rabbit?) moment, which causes him to do something where even he says “I’ll probably hate myself in the morning”, but it adds to the hilarity at the end.

The visual aspect of Bugs Bunny cartoons is what makes me love animation so much. It showed me that there are some things you can only do with animation. Sure Disney films brought me to new worlds, which are more easily created with animation, but Bugs Bunny cartoons taught me that animation can do so much more with just small scale things, such as comedy, character creation, and interactions. A cartoon can show you an aspect of the character’s personality or even what they are thinking with how they move. Only in cartoons can you make verbal puns visual and literally bring them to life. Only in cartoons can you have someone walk through one door and appear through another to confuse a foe. In fact, this cartoon is the first instance of the classic “lots of doors in-and-out” gag.

This simple trick is seen in so many cartoons, including other Bugs Bunny cartoons, and it all started here – with Bugs running away from a big bad Wolf. Also notice how in this scene, every movement is punctuated by a musical note or sound accompaniment. Bugs’ smaller pattering of feet are higher lighter notes, while the Wolf’s rumbling steps are lower. Not only does each character have their own sounds, but HOW they move is portrayed skillfully through both sight and sound. For instance, a rising tone is given to each character’s note as they go up the stairs, and a falling tone as they move down the stairs. The action accompanied by the in-sync music adds to the characters, their movement, and the comedy.

The gags work under the expectation versus reality premise. The audience made to expect something, and then that expectation is proved wrong – a common staple of Merry Melodies/Looney Tunes cartoons, as explained in this video about Chuck Jones (though Chuck Jones actually didn’t have anything to do with this short, as it is a Friz Freleng creation). The ending especially fulfills this expectation-reality theme with a certain twist of its own that I wouldn’t dare give away. But what is brilliant is that it makes sense with everything leading up to it. From the interactions between Bugs and the Wolf to the interjections Red makes throughout the story. By having a third party constantly throwing herself into the action, it interrupts the usual pattern of a Bugs Bunny cartoon, and it is that disruption that makes the final punchline so brilliant.

There’s not much else to say about this animated short. Like pretty much all Bugs Bunny films it is timeless and priceless, and I will probably continue to watch it many times over every time I revisit cartoons starring my favorite cartoon rabbit.