Yeah, I’m doing a second opinion article. For the record, SciFridays is a great column, and this is the first time, I think, that I have ever strongly disagreed with anything Sarah has ever said in the last three years of writing it. But gee whiz do I ever disagree this time. 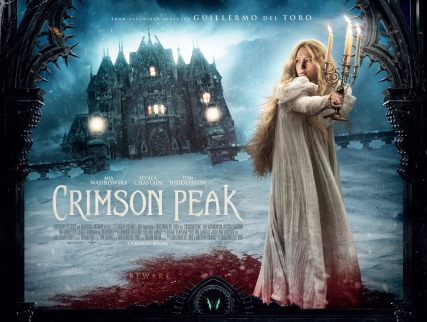 The Plot: Aspiring horror novelist and ghost-seer Edith Cushing (Mia Wasikowska), after several minutes of establishing herself as a proud-minded free spirit, decides to marry the first dashing Englishman who crosses her path. In her defense, though, this Englishman, Thomas Sharpe, is played by Tom Hiddleston. What would you do? What would any of us do? Moving to his dilapidated estate in the harsh English midlands, co-inhabited by his creepy sister Lucille (Jessica Chastain) and several ghosts, Edith begins to unravel a mystery of violence, weird sex stuff, and art direction.

Sarah did not like Crimson Peak. I loved Crimson Peak. More specifically, I loved all the things about it that she didn’t like. C’est la vie.

Crimson Peak depends upon numerous literary tropes, clichés, and occasionally inconsistent character development. And you know what? That is exactly the point. Some critics have complained that it doesn’t know what kind of movie it wants to be and that writer/director Guillermo del Toro meanders through a thick fog to a lazy climax, but they couldn’t be more wronger, as the kids say. Crimson Peak is possibly the most carefully made and deliberate release since the beautifully complex Ex Machina. How can I go from acknowledging clichés and inconsistency to lauding its deliberation? Well, remember del Toro’s Pan’s Labyrinth? Sure you do. It’s a memorable movie. Pan’s Labyrinth is a fairy tale about why we tell fairy tales. Well, Crimson Peak is a Gothic ghost story about why we tell Gothic ghost stories, only people seem to be missing that. Edith’s character inconsistencies are paramount to this; they’re not a weakness, but one of the film’s defining features. She embodies the quintessential reader; intellectual, strong-willed, clever, but ultimately unfamiliar with the world outside of her books. When she becomes the heroine of her own Gothic creation, she not only fails to notice this, but is entirely ill-equipped to deal with it. She flows from reader/writer to Gothic heroine and, like any reader/writer, doesn’t know what to do when confronted with real horror. So yeah, like any human being would, she chooses to move to a creepy, isolated old house and live with Tom Hiddleston and Jessica Chastain. Okay, all kidding aside, who would turn down that opportunity? Who?

Legendary Pictures
Yeah, seriously, I’d be there so fast.

As for her voice over, I feel like I shouldn’t have to point out that the movie opens with a book, entitled “Crimson Peak.” It opens and the film begins. When the film ends, the book closes only this time, underneath the title it says, “by Edith Cushing.” This isn’t a cute little gimmick. Edith’s experiences in the film get to the heart of storytelling. At one point she says that she doesn’t command the characters in her books, but rather lets them tell her what to write. A lot of authors say as much. Character agency lies at the heart of this, and the interplay between character and author could not be made much more explicit than it is here. Yet, still, people miss it.

And then there are the pinhole transitions, which a lot are criticizing as juvenile or hackneyed. They are, obviously, a callback to the Gothic horror films of the ‘20s, ‘30s, and ‘40s, but has anyone noticed that del Toro stops using them as soon shit gets real? When it stops being a campy, expositional Gothic Romance, and starts being a serious, spooky story with one grim revelation after another, he does away with the old-fashioned tropes. Notably, this is also when Edith recovers from her Gothic heroine-ism and starts acting like a real adult.

I’m happy to say, though, that we all seem to be on the same page about a few things. The performances by Mia Wasikowska, Tom Hiddleston, and especially Jessica Chastain are all phenomenal, and the film adheres to del Toro’s usual standard of art direction. The sets and costumes create a totally immersive world and while the film isn’t exactly scary, the atmosphere of spookiness and creepiness are exquisitely cultivated for the perfect Gothic effect.

Even with a couple months left in the year, I can confidently declare that Crimson Peak will rank among my favorite movies of 2015. Between this and Pacific Rim, though, I kinda feel like I’m destined to become as much a del Toro-defender as I am a Ridley Scott-defender. Look, he’s a great director, and none of his films should just be written off, especially if you’re writing them off for all the wrong reasons. I don’t like having to tirelessly defend movies to people, but in this case would do so happily just to promote the audience reception Crimson Peak deserves.