In 2001, Pixar studios released Monsters Inc., a wonderful, wonderful film exploring the world of the monsters that live in our closets. In this world, monsters harvest human screams for energy, so the most important people in that society are the official scarers. The film focuses on the adventures of the top scarer, James P. Sullivan (John Goodman), and his sidekick/best friend Mike Wazowski (Billy Crystal). I was eight when this film came out and, unsurprisingly, I loved it. I was a kid, so I loved pretty much anything you stuck in front of me. Monsters Inc. has aged incredibly well, though. Re-watching it, I realize just how truly inventive, witty, heartwarming, and smart it is as a film. It oscillates with Up as being my favorite Pixar film. I was simultaneously excited and cautious when Pixar announced that, twelve years later, they were making a prequel.

The Plot: Mike Wazowski is not a scary monster. He’s adorable, funny, smart, and really motivated, but he ain’t scary. Despite this, however, it is his lifelong dream to attend Monsters University and become a scarer. When he arrives there, though, he discovers that hard works isn’t necessarily all the counts in college. Popularity, money, and a family name can be just as important to success. It’s a harsh truth, but there it is. That’s where Sulley (that’s J. Sullivan) comes in. A competition between the two students ignites, but when they accidentally offend the already disgruntled Dean Hardscabble (Helen Mirren), they must work together to prove their worth and save their place as students. How? By competing in the Scare Games, where the monster frats and sororities compete to prove who’s scariest. Of course, Mike and Sully get stuck with basically the nerd house. 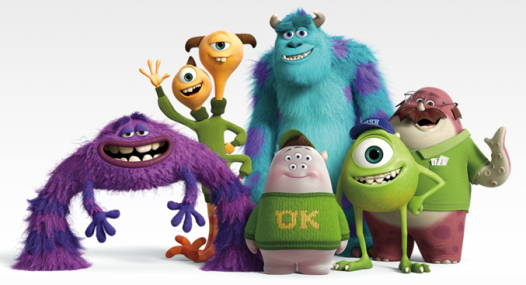 So, Pixar’s been making a lot of sequels recently, eh? You got Toy Story 2 & 3, Cars 2; they recently announced Finding Dory…somehow they haven’t yet made a sequel to The Incredibles, but whatever. The number one question everyone should ask about sequels (or prequels) that weren’t initially planned or demanded by the original story is, “Is this necessary?” Usually, the answer is “no” at first. Toy Story didn’t need sequels, but they both turned out great and ended up justifying themselves. Cars 2 didn’t. So, did Monsters Inc. need a prequel? Oh, lord no, of course not. Did the prequel justify itself? Yes.

Disney/Pixar
You get to see Mike Wazowski as a baby, so how could it not justify itself?

As I mentioned before, Monsters Inc. thrives on its originality and ingenuity. The creation of the monster world is economical and flawless. Everything you need to know is explained in a nice little Monsters Inc. commercial at the beginning, and the rest is about the wonderful characters. Monsters University inherently lacks much of that freshness because it takes place in a world that has since become familiar to the viewer. Actually, the filmmakers are so confident that everyone is familiar with the world that they don’t waste any time on a recap, so I hope not many kids saw this movie without having seen the first one, because they would be mightily confused.

So yes, Monsters University does not possess the creativity of its predecessor, but I think the filmmakers recognized that going in. Knowing that they don’t have to devote time to the creation of the world, they are able to focus entirely on character and story. Indeed, the characterization in the film is quite strong for both Mike and Sulley. In a pleasant twist, Mike is the main character of this movie. In Monsters Inc. he was an important character, but Sulley was definitely the lead. Here, though, we follow Mike’s journey from the beginning of the movie to the end, and Sulley only develops insofar as he does with and to Mike. This comes as a wise move, shifting the focus to avoid redundancy. Both characters manage complete, believable, surprisingly organic character arcs as they grow from stupid teenagers into the monsters we loved so much from the first film.

Of course, this is a Pixar movie, and most Pixar movies succeed by showing something new, like toys with abandonment issues, a dysfunctional family of superheroes, or a rat who is also a gourmet chef. Despite all I’ve said, Monsters University is a creative film, though it’s not entirely original. Essentially, it’s combining two very familiar constructs: the world of Monsters Inc. and the classic college underdog story. While neither of these things is original to this film, the combination of the two is, and it works really well. College for monsters? It’s a great idea, and something Dreamworks probably should have thought up for a washed up comedian and called… Monster College or College for Monsters, or something like that. Like all college and/or children’s movies, this plot has a lot of potential for stupid comedy. Luckily, the writers aren’t stupid, so neither are their jokes. I laughed a lot in this movie, but they weren’t cheap laughs.

This actually connects to another thing I wanted to talk about. Please pardon my ostentation segue. Since Monsters University can’t be as new as Monsters Inc., they decided to make it clever in a different way: by having the whole movie essentially act as a careful deconstruction of the comedy and horror genres. Oh, that was unexpected. How did they do that? Well, Mike spends a lot of the movie studying scare techniques. While this is talked about frequently, it’s not truly until the end that we get to see it implemented. For reasons that I will not explain now for the sake of avoiding spoilers, the film’s climax involves Mike and Sulley working together to pull off a massive and carefully calculated scare. The result is probably the best analysis of horror movies I’ve ever seen… which means The Cabin in the Woods can, still, as per norm, suck it. Mike and Sulley tap into all of the classic horror clichés: manipulating an isolated setting, using darkness and shadows to their advantage, creepy noises. They start small, with things that aren’t necessarily scary on their own, and build up to full-fledged fright. They even use a creepy baby doll and a broken record. The goal of Monsters Inc. was to show kids that they didn’t need to be afraid of the monsters in their closets, because they’re actually cuddly and nice. Monsters University takes it a step further and gives them a better reason to not be scared; it encourages them to think about what makes something scary, and how that emotion is achieved. It clearly outlines the process of making horror in a movie. If fear is based on ignorance, then understanding should be the solution.

Disney/Pixar
Granted, though, some things will be scary anyway, like a combination lizard/bat/centipede.

How does this connect to comedy? Well, cheap laughs and cheap scares all come from the same place and undergo a similar thought process. I’m not really going to get into that because this review is already kind of long.

All in all, Monsters University holds its own against other Pixar classics. Like all truly successful kids movies, it will be beloved by children and appreciated by adults. Though not initially called for as a prequel, it more than justified itself, and as I am someone who saw and loved the original as a child, take the following statement with all its weight and gravity: I have no complaints.

2 thoughts on “Second Breakfast Goes Back to College… for Monsters!”