Baddie – I’m assuming a Sharknado of some kind.

Lesson – Fire is not the answer. Machetes and power tools are always the answer.

Well, it’s that time of year again. Time to play into the social media blow out that is the Sharknado franchise (some of you will remember my feelings regarding the first Sharknado) I’m foolishly hopeful for a better showing this year, but then again, Sharknado loosely translates into “We made something so crappy and ridiculous you’re obligated to love it because of previous cult movie standards even though we ignored cult movie standards.”

I know that I’m part of the problem, I acknowledge this. I tuned in, I’m writing about it, I live-tweeted it, but hey, I’m attention desperate, and I promise this won’t be the last time I live-tweet a movie. I figured I would write this review in accordance to my expectations. So, in no particular order:

1) Some effects consistency. Sharknado suffered from a lot of water depth consistency issues, which is difficult to swallow only because there are supposed to be sharks swimming around, so. There’s that.

Eh, again we have some flooding conundrums, but there’s not the rampant shot switching that there was in the first movie. We’re transitioning slowly from ridiculous for the sake of ridiculousness to some true ‘horror’ logic? Why wouldn’t an electric subway rail electrocute the sharks – horror logic. 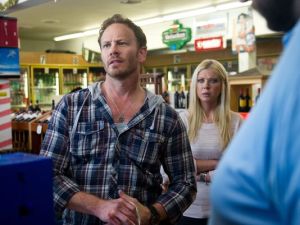 2) Shark weather and/or sizeable activity pre-the first hour mark (including commercials). The runtime of this movie is two hours and two minutes, including commercials, and Sharknado suffered from a serious lack of sharks, tornadoes, and sharknadoes. I want more sharks.

Technically there’s a shark and a storm in the first five minutes. And then a lot more sharks and a large storm. How is it that no one sees these things coming? Storms aren’t sudden, they…they manifest. This doesn’t seem to impact anything, and that’s cool, I guess. The more B-List celebs they have, the more opportunities for insane shark attacks, which is…a direction. The actual sharknado turns up around the same time as the first movie.

3) Subtlety. I have no reasonable expectation for subtlety, I just want it. I want simple references that build to cheesy reveals and long-con jokes, but I know it’ll be ham-fisted and clumsy.

I guess I’ll also accept an inundation of jokes. Within the first five minutes, a reference to Airplane! and The Twilight Zone. There are also so many cameos I can’t keep up with them. As of the twenty minute mark, we had Kelly Osbourne, Will Wheaton, Kelly Ripa, Michael Strahan, Matt Lauer, The Naked Cowboy and apparently Billy Ray Cyrus.

4) At least ONE effective shark shot that doesn’t look CGI dumb. Just one. Jussssst one.

The CGI is better in this movie, I guess. The shark storms still look ridiculous, but I wouldn’t want to be the artist in charge of rendering hundreds of sharks for a sharknado. Most of the water looks like a comic book, but, y’know, water is expensive. Can’t actually flood NYC, can we?

6) Better practical effects, including but not limited to makeup application. A little effort goes a long way.

Uhhhh not great. It’s still kinda sloppy for some reason, and I don’t know why. Is that where the budget sacrifices came from? “Just pile a bunch of latex on there, it’ll be fine.” “Make no attempt to fix the perspective, it’ll be fine.”

What we may have here is a self-fulfilling movie prophecy. Some movie franchises do in fact build on themselves – take the Evil Dead franchise. It started with a simple movie that wasn’t perfect, it got a remake that was perfect, and a sequel that was ridiculous because it raked in all of the comedic harvest it had planted in previous movies. The main difference here is that the first Evil Dead is still a delightful cult classic, where as the first Sharknado is a steaming pile of bull that Syfy vomited up in their spare time. It did, however, leave some room for the second movie to cash in on the nuggets of ridiculousness.

So seriously, SyFy, you’re better than this. Asylum, well, probably not. But SyFy, you definitely are. Please stop.