Well, Octoberween has come to an end. As we ride boldly ride into the dreary month of November and ready ourselves for Thanksgiving and Christmas(!), we shall not forget the creepy times that we had. Still, time goes on and though it may sound harsh, we cannot tarry to mourn. We bury our dead, eugoogolize, and cheer ourselves up as best we can. And that brings me to… 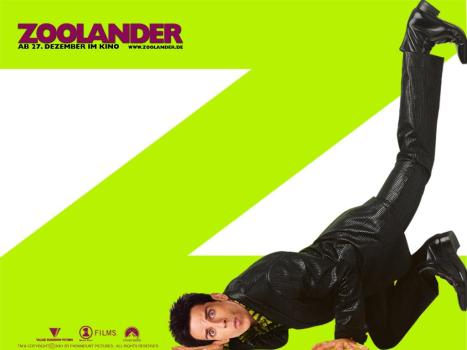 The Plot: Derek Zoolander (Ben Stiller) is the foremost male model in the world. He’s on the cover of all the magazines, models the hottest styles, and has won Male Model of the Year three years running. All this falls apart, however, when he loses the award to newcomer Hansel (Owen Wilson), and suddenly he has to face his demons: he’s lost connection with his family, he can’t turn left, and maybe, just maybe, there’s more to life than being really, really, really ridiculously good-looking. His soul-searching faces new challenges when the evil fashion designer Mugatu (Will Ferrell), brainwashes Derek to assassinate the Prime Minister of Malaysia.

What is there to say about Zoolander other than it is one of the few perfect feel good movies? There’s nothing to hate here. The characters are all phenomenally stupid, but in the best, most endearing and organic ways possible. There’s little cheap comedy, despite the wanton stupidity. It’s weird, and kind of hard to explain. The idiocy is oddly clever. Does that make sense? There are very few obvious gags. Ben Stiller (who also wrote and directed) got pretty creative with the humor. His film actually somehow pushes the limit of dumb comedy into new territory, and that probably shouldn’t be possible.

Paramount Pictures
I have that same jacket.

Geez, I’m going about this all wrong. I’m actually reviewing Zoolander. Zoolander. This is wrong. What is there, really, to say? This is a movie in which three people die in a freak gasoline fight accident, a movie with a main character incapable of turning left, with cameos from Natalie Portman, Donald Trump, Cuba Gooding Jr., Gwen Stefani, Heidi Klum, Christian Slater, Lenny Kravitz, Lukas Haas, Winona Ryder, the Incomparable Billy Zane, and, of course, David Bowie.

I mean, Zane is as good as always. One of my few criticisms of the film is perhaps that it lacked Zane. He was only in one short scene. I’m not saying that he should have been the main character, but, come on, Billy Zane. He’s a cool dude. 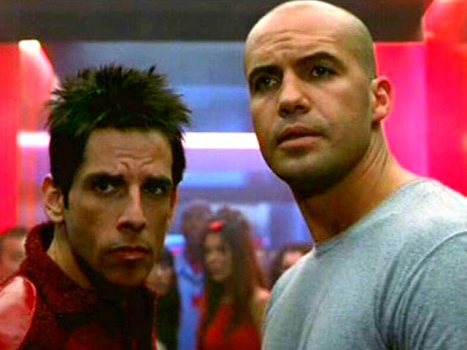 Oh, and yes, David Bowie. Funny story: they wrote him into the script before they new whether or not he’d accept the role. It’s an excellent cameo, coming at a pivotal part of the narrative. Zoolander has just challenged Hansel to a walk-off, which is one of the darker sides of the world of male modelling. This is when two models take turns walking down a runway, using only stance and poise to model whatever they happened to be wearing that day. Whoever looks the best wins. In a great moment, Zoolander addresses the crowd, asking for a volunteer to judge, and yes, David Bowie answers the call. It’s beautiful. A friend of mine wondered why they didn’t use Bowie’s song “Fashion” in this scene (or any other in the movie), but then she came to the insightful realization that it’s because the song includes the lyric “Turn to the left.”

Despite that, Zoolander does boast a pretty amazing soundtrack, including “Relax” by Frankie Goes to Hollywood, “Working for the Weekend” by Loverboy, “Beat It” by Michael Jackson, “Let’s Dance” by Bowie, and, perhaps most importantly, “Wake Me Up Before You Go-Go” by Wham!. You know Wham!. You remember. George Michael’s band from the ‘80s? Click on the link from the song and behold what, in my present state, I am comfortable declaring as simultaneously the whitest and gayest thing you’ve ever witnessed. And of course, the scene in which it’s used is pretty perfect:

Man, can we also talk about the fact that this came out the same year as The Royal Tenenbaums? Ben Stiller and Owen Wilson were having a dynamite year. Owen Wilson got an Oscar nomination for writing that year. On fire, you guys, on fire.

Okay, but I guess you’re wondering, at this point in the article, what my purpose is. Everyone has already seen Zoolander, right? I’m just rambling about a great, familiar movie. I’m not saying anything new, am I? I may as well be writing a review of an accepted classic from the ‘40s about which tons of people have written. Right? Yeah. This is one of my filler articles, for sure, but there’s a bit more to it than that, and to all my similar pieces. Guys, it’s November. Octoberween is dead and gone and Thanksgiving is still a little ways off. Between now and Christmas there’s little other than exams, bunches of work, stressful shopping, and frantically excavating cars from beneath glacial ice sheets. Amid all of that, everyone deserves to take time and watch a feel good movie. Whatever it may be, you’ve earned it. Need a suggestion? Watch Zoolander. It’s so dumb.

5 thoughts on “Second Breakfast Is Really, Really, Ridiculously Good at Writing About ‘Zoolander’”