Happy Easter, y’all! Reckon it might be suitable to do something thematically relevant to this special occasion…ah…here’s the thing, though: I tend to find filmic representations of the Crucifixion a little, how should I say this? Tasteless? Yeah. Tasteless. Personal opinion. Don’t worry, all of you who are for some reason worrying, for while it is not specifically linked to Easter, I’ve managed to select a film that is absolutely teeming with Christian symbolism, because it’s based on a book by John Steinbeck. I’m not going to make a list of all those references, because that just wouldn’t be economical, but I’ll point some out as we go along.

The Grapes of Wrath (1940) (the title is Biblical reference!) 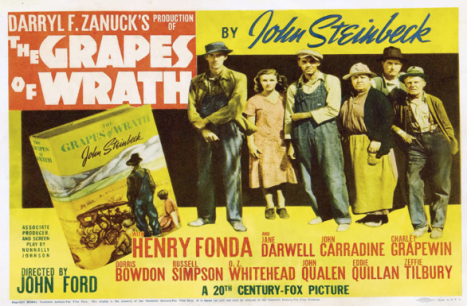 20th Century Fox
Old-timey posters are the best.
Buy the movie! Share the sadness with your friends!

The Plot: Tom Joad (Henry Fonda) (note: Joad/Job see that?) returns to the family farm after serving four years in prison for homicide (prodigal son). He encounters a family friend and ex-preacher Jim Casy (John Carradine) (J.C. Geez, Steinbeck, what are you referencing with those initials? It’s a coincidence that John Carradine shares those initials) before meeting up with his family and learning that they’re being forced off the family farm because, oh yeah, the Great Depression (and, you know, there’s something thematic about people getting forced from their homes). So, the Joads (numbering twelve in total and including a young married couple with a baby on the way (shouldn’t have to explain that one)) and Casy (oh, so we have twelve apostles for our Christ figure, gotcha) take to the road to California in search of work. Along the way, EVERYTHING GOES WRONG (again, Job), but Tom’s trials teach him a great deal about life, love, family, and everything that’s wrong with 1930s America.

20th Century Fox
The goat actually isn’t a member of the family or an important character, it’s…symbolic? Uhm…yeah, not sure.

But this review is not just going to be about all of the Biblical references. That would get tiresome, because there are almost as many per minute as Steinbeck squeezes in per page. Nah, I’m going to talk about other important stuff, like why this movie is so damn great. There are a number of reasons why, but first and foremost is the direction. Who directed it? Guys, John Ford! We all know John Ford, right? Stagecoach, The Searchers, The Man Who Shot Liberty Valance, The Quiet Man, How Green Was My Valley, My Darling Clementine, Young Mr. Lincoln. He’s the greatest American filmmaker of all time. You’ve heard of him. The Grapes of Wrath is one of his many classics, winning him one of his four Academy Awards for Best Director #worldrecord (sorry about the hashtag, I just started using Twitter). Every shot in this movie is so consciously, perfectly set up. Ford knows exactly when to get in close, when to hold back, when to cut, when pan, etc. The Grapes of Wrath is a lofty book. It’s massive both in terms of length and content (which are not the same thing), but Ford, aided by screenwriter Nunnally Johnson, manages to create a true adaptation that honors both Steinbeck’s original intent and the confines of the cinematic medium.

20th Century Fox
And would you just LOOK at that shot. That’s how you shoot a movie, kids.

The other aspect that really sets this film above so many others is that it sports a brilliant ensemble cast. Henry Fonda delivers one of the best performances of his career. He’s a great actor, but from my experience, he’s only ever really great when he’s working with John Ford. The Grapes of Wrath, My Darling Clementine, Young Mr. Lincoln, yeah. John Carradine gives a fabulous and largely unrecognized performance as Jim Casy. Watch this back-to-back with Stagecoach and you will appreciate how great an actor Carradine was. Arguably the best performance in the whole movie though is from the great Jane Darwell, playing Ma Joad. Deservedly winning an Oscar for her role, Darwell brings a much-needed heart and soul both to the film and to the Joad family (are maternal figures particularly important in the New Testament?). Ma Joad becomes the figure of stability and rationality as tragedies befall the family, Casy is persecuted for trying to help people (we get it, Steinbeck), and Tom struggles to keep his human decency in check despite everything that happens. 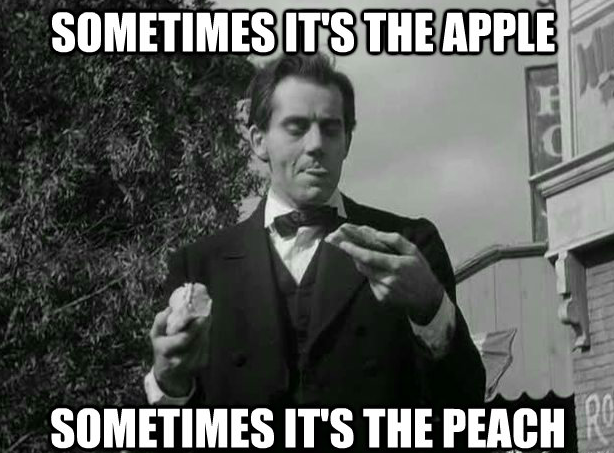 20th Century Fox
Tom’s struggles are arguably more difficult than some of those that Fonda had to portray in “Young Mr. Lincoln”.

In some ways, Ford’s film is a more powerful depiction of the Depression than Steinbeck’s novel. If for no other reason, then because the film is a visual medium, and what takes Steinbeck six pages to describe in excruciating detail, Ford can show us in one shot. He does this to great effect with such great and timeless shots as the opening of Tom walking alone to a crossroads (CROSSroads, get it?), or panning across droves of starving exiles at the metal fences of a plantation (Eden).

The best scene is the famous “I’ll be there” speech that Tom delivers at the end of the film. This shouldn’t come as a spoiler to anyone because it’s so well known. If it is a spoiler, then I’m more than happy to spoil it, because you should all be familiar with it. Remarkably, it is considered both one of the best scenes in American literature and one of the best in American cinema. It’s daunting to adapt any book, but especially one that’s so beloved and important. How do you take one of the most famous and moving speeches in literature and translate it to film? There’s an enormous amount of pressure on the actors and director for that kind of thing, and in most cases, the film falls short. Just look at every adaptation of A Tale of Two Cities. Of course, Ford, Fonda, and Darwell do a brilliant job. It’s one of the several instances in the film that will likely result in tears. If you’re bad at reading or watching black and white movies, just listen to Bruce Springsteen’s song “The Ghost of Tom Joad.” It does a pretty good job (or Job, if you will; that gag works better as a verbal pun rather than a written one).

Actually, a couple of the photographs in that video are just stills from The Grapes of Wrath, but you’d never be able to tell because that’s how good a representation of the Depression it is.

So yeah, on that note, Happy Easter. Watch The Grapes of Wrath, bask in its glory, feel sad, and be happy that our economy ain’t that bad yet.