Let me get one thing out of the way: I did not read Ender’s Game as a child. I have not worshipped its brilliance for years and pined for a movie while waiting anxiously for a fair treatment of the content. I read Ender’s Game this week, and I finished it within 24 hours of seeing the movie (Incidentally, it’s a great book, and I highly suggest reading it).

A brief plot recap: Earth is recovering from a devastating attempted-invasion that they deterred on, frankly, a fluke. In an attempt to be better prepared, a new class of soldiers are trained – children. Appropriately smart children are monitored (via a small device) and, if approved, sent to Battle School, and eventually to Command School, should they be suited for it. Andrew ‘Ender’ Wiggin is such a child, proving even more promising than others, and is fast-tracked through the program.

If there is any one take-away from a book v. movie debate, Ender’s Game falls into what I am now going to call the ‘Eragon/Hobbit’ paradigm, in which a movie is either significantly too short or too long for the source material. “Eragon” is a beautiful YA novel that was turned into a tornado of a film. The Hobbit is another great book that is being turned into a full like, 9 hours of film. “Ender’s Game” is just over 300 pages (in the edition I own) and takes place over the course of 6 years (and then some) of Ender’s life. This is accomplished largely through literary montages. One year of battle school might take a few pages, or a few chapters. Ender begins battle school at age 6 and starts command school around age 12. The movie takes place over what seems to be about a year, and Ender’s age is stagnant around 11 or 12 (although it’s never explicitly stated, only that he’s older than 6).

For me, this really interrupts the atmosphere of the book when coupled with other factors I found disconcerting:

– I might be the minority, but I did not like the casting. Almost universally, everyone kind of rubbed me the wrong way. This isn’t to say that the acting was -bad- (although at times it was kind of strange) but it was not at all congruous with my mental casting.

– I don’t know why they opted to get rid of the ‘bugger’ slang. It was this familiar thing that held everything together, the common vocabulary, and yet…nothing. One reference to a ‘bug’. (ADDENDUM: Through several of my friends, including Drew of Mindless Action Mondays fame, I now know that bugger is British slang with negative connotations, hence the removal. I can see why they swapped it out.)

– The complete neglect of the Peter/Valentine storyline with Locke and Demosthenes, which leads to Valentine’s reunion with Ender at the end of the novel. It felt very dramatic and suspenseful as a reader to weigh Ender’s simulated preventative training while some very real tension was mounting on Earth, enabled by the intelligence of his siblings. Also, Peter is psychotic, and this is important to Ender’s character development.

Actually, speaking of which, the character development is super rushed, like, ridiculously rushed. I wanted to avoid saying, “In the book…” a lot, but, seriously – in the book, Ender goes through periods of vulnerability, of loneliness, isolation, struggle. He fights his way up without really knowing he’s doing so. He’s a pawn, but he never knows how far in the dark he is until the end. The movie has him adjust to everything very quickly and seemingly without consequence, the Bonzo incident aside. 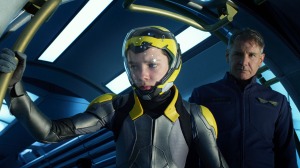 Now let’s talk about the end, specifically how silly and cinematic it was. Was it a large ploy to avoid having to cast an older Ender right away, or what? All this nonsense about him communing with the buggers without rhyme or reason. Well, I shouldn’t say that. The rhyme and reason is, originally, to set him up for “Speaker for the Dead.” The film however, ends with him on a singlehanded mission to find a new colony for the buggers with the remaining queen egg. I mean, sure. Why not.

I overheard someone behind me say, “If they did this movie right, it’d have to be rated R.” And, y’know, they are correct. Ender does some awful things in the book that equate to a lot of child-on-child violence. The mindgame is a lot more graphic and disturbing, even for a reader, let alone an audience member. The knowledge that Ender has been sending soldiers to their death because he thought it was a simulation for MONTHS is a huge reveal. This is a book that brought me close to tears. This is now a movie that infuriated me for its superfluousness. I always get annoyed when I think a movie could have spent time developing some of the more serious notes rather than the fluff to hold it together.

This being said, I would love to hear what a person thinks of the film who hasn’t read the book, because it will hopefully be a great experience for them. If I were to review the non-plot stuff, I will say, the set dressing is fantastic. I saw it in IMAX because, y’know, space, and I was not disappointed. The battleroom scenes, while few in number, are so cool. On the big screen I got disoriented, and I loved every second. The costuming is awesome, and there is a bare-bones approach to makeup that resounds with the military feeling of the film and I appreciated that. I think the interior of the bugger world seemed like a lot of papier mâché, but, that might be me being picky. There were a lot of subtleties in the UI displays, the homes, the ships, etc., that I liked. Definitely a lot of attention was paid to an immersive experience.