So, as many of you know, I am a college student, and shall remain in this state of being for a few more months. Attending a college comes with many things, including a bunch of people expecting you to partake in community events. My university is particularly keen on participation in festivals, celebrations, awareness weeks, fundraisers, etc. I’m particularly bad at taking part. Call it a character flaw. Well, this week is “Love Your Body” week, which encourages everyone to feel comfortable in the bodies they have, flaws and all. It’s generally pretty good. I’m not a proponent of body image issues, believe it or not, and I don’t think anyone deserves to feel bad about the way they look.

Unfortunately, this has bred a surprising amount of hypocrisy and shaming across campus, specifically targeting traditionally pretty people. How dare they look pretty? Damn them and their fine, fine bodies. Ugh. Some of these sentiments even came from the organizers of the event. It sort of baffles me how anyone could so completely miss the point of their own idealism. Anyway, I’ve been incredibly timely with my last several reviews, so I think I’ve earned one filler article. 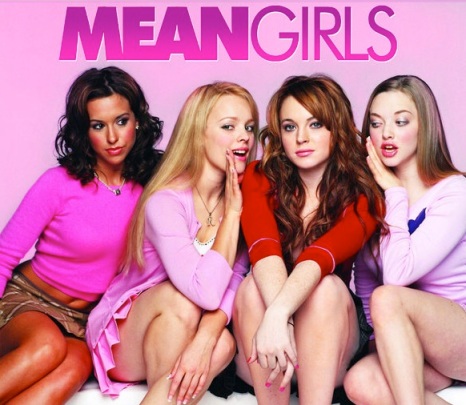 The Plot: You all know it. Cady Heron (Lindsay Lohan) moves to America after having spent her entire life homeschooled in Africa. With Elephants. She quickly makes friends with Janis (Lizzy Caplan) and Damian (Daniel Franzese), but also garners interest from the Plastics, the popular girls, Regina George (Rachel McAdams), Gretchen Wieners (Lacey Chabert), and Karen Smith (Amanda Seyfried). To settle a years-old grudge, Janis incites Cady to join the Plastics and systematically ruin the abhorrent Regina. This plan is made only more complicated by Cady’s social inexperience and her developing crush on Regina’s beau, Aaron Samuels (Jonathan Bennett).

I don’t think I need to give much actual criticism for this movie. As with my article about Zoolander, I’m not going to say anything that hasn’t already been said and that isn’t widely accepted by the populace. Mean Girls is beloved by… hang on while I think… yeah, pretty much every girl I know, because it delivers a solid depiction of the dog-eat-dog world of high school politics. Eat your heart out, House of Cards, this is where the true conniving takes place. Even beyond that, though, Mean Girls is just a hysterically good time. I can’t watch this movie without laughing out loud (or LOLing, as I believe the kids say). It boasts a strong script with an impressive selection of quotable zingers. Frankly, many more than a movie like this ought to have, but this is less surprising when you realize that Tina Fey wrote the script. Being a middle school boy when this movie came out, and a high school boy when its legacy became particularly relevant, I admit that I was guilty of a fair amount of eye-rolling. It took me far too long to finally just sit down and watch this movie, and my only regret is that I didn’t do it sooner, because it is spectacular.

The comedy, while paramount to the movie’s success and survivability, is not the point of the movie, nor of this article. The point is basically what I hinted at in the opening paragraphs: don’t be a bitch to people. After experimenting with being a mean girl and realizing that that won’t lead you anywhere good, Cady learns a great deal about life and basic human decency. To quote her own voice over epiphany, “Calling somebody else fat won’t make you any skinnier. Calling someone stupid doesn’t make you any smarter… All you can do in life is try to solve the problem in front of you.” Those words just took on a whole new meaning to me as I wrote them while listening to the 12 Years a Slave soundtrack. That’s some deep, historical stuff right there. All joking aside, though, Cady’s words are pure wisdom, which everyone should learn. Before you insult someone, think about what could possibly be gained from it. Do they actually deserve it, or are you achieving nothing but to hurt them, in which case, who looks worse afterwards?

This movie was relevant in middle school and high school and I was sort of hoping it wouldn’t be in college, but now I know that it will always be relevant, because no matter where you go, odds are somebody’s gonna be a jackass.

One of my professors was recently saying how he thinks film studies should be taught in schools the same way literature is. Film is a cultural text, and you’re understanding of society will be stunted if you can’t read it properly. High school kids should all have to watch Casablanca and Metropolis, everyone should have seen The Searchers and Seven Samurai. It’s basic, canonical stuff like reading Shakespeare or Dickens. But I also think everyone over the age of twelve should be required to watch Mean Girls… and also ParaNorman. Both films are about bullying and why you shouldn’t do it. Many a high school hell scape could be tamed if more people watched and got the points of these movies. That’s my two cents. I’ve moved on to The Hunt soundtrack and next up is Shotgun Stories. This is a sad playlist. Damn. Ah, I’m in no mood to keep writing. Be kind to each other, folks, especially you kids. The rest of you, feel good about yourselves.