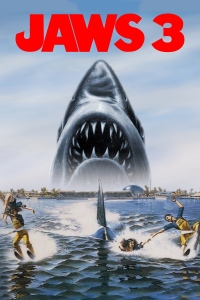 Ohhhhh Jaws 3, also known as the Jaws with Dennis Quaid. This used to be Jaws 3-D, which is evident approximately 10 seconds into the movie where they try and scare audiences with a floating fish head. In fact, almost anything that gets dismembered floats towards the audience with a weird attempt to create depth via thick outlines.

This is my (and Reddit’s) favorite Jaws sequel, and for good reason. It’s amazing, as far as shark movies go. We’ve departed completely from the seriousness of the first film, and it’s basically not a Jaws movie in that sense. This time the new gimmick is the 3-D, which did not sit well in theaters, so really we’re just left with a very aggressively visible shark and it’s awesome. It has one of my favorite shots in a shark movie ever – Jaws sliding through the glass of the aquarium control room. I would say smashing, but it’s a really elegant hand-animated glide. 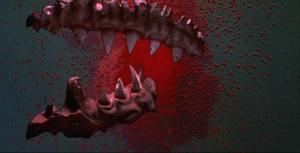 Right off of the bat, Jaws immediately reminds us of his love of water-skiers by skulking in the distance. As I said earlier, this is my second favorite Jaws movie (obviously there’s no comparison to the first), because it’s the one with the undersea Seaworld complex, and it has some really iconic and memorable moments. This is also probably the most ethnically diverse Jaws movie (although that’s not saying much). This also takes place in the future, where Mike Brody (Dennis Quaid), son of Martin brody is the hero this time. He’s married to an orca trainer. Sean Brody is in this movie also.

When you think about it, there’s no comparison. I mean, this is the Jaws with a daring dolphin rescue, and a submarine, and an underwater theme park, and poachers, and an eccentric photographer and so much gosh darned excitement. For Christ’s sake they capture him and put him on display in this movie. OR DO THEY. They capture -a- shark and put him on display. But that shark dies…so…who did they catch? There’s a -mom- Jaws in this movie, you guys. A mom Jaws. Jaws 3 goes places not a lot of shark movies would dare to go, and it does it with the special effects prowess of Shark Attack 3: Megalodon but the heart of Lassie. 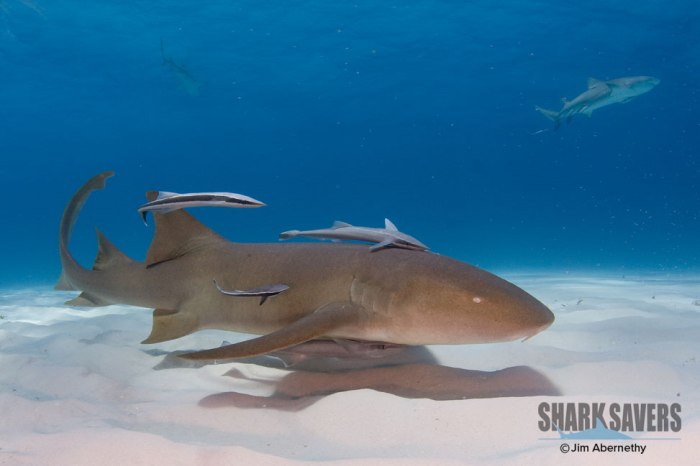