Welcome to the bigger, badder, but specifically now posted on Wednesdays Bomb in the Lasagna! After a week away I’m back to examine one of the biggest movies of the summer. 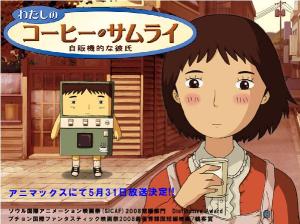 *deep breath* The Plot: Struck down by his enemies, Jin, a powerful samurai warrior, makes a desperate wish to be reborn with an invincible body of steel with his last dying breath. Jin’s wish is granted and he is reborn in modern day Seoul as a sentient coffee vending machine. Using an ability to transform into a human for a short period of time each day and a magical sword that has a tendency to erupt through whatever surface Jin happens to be standing on whenever it’s summoned, Jin continues his to fight the forces of evil in contemporary Seoul. But Jin’s dedication to a solitary warrior code and to dispensing hot coffee is challenged when he falls in love with recent college graduate Hemi, who works a dead-end job at a snack shop. As his enemies close in, Jin must decide whether he will continue his ancient battle or choose a path of peace in the name of love while also navigating the sort of troubles you would expect a sentient vending machine to have in a bourgeoning relationship with a human woman.

Still with me here? Great.

As should be pretty clear by now, Coffee Samurai, a Korean animation whose director’s name I couldn’t find, is an unabashedly weird short. It’s become a cliché (and often a pretty unfair one at that) that anime is stranger than its western counterparts, but its pretty hard to deny that Coffee Samurai is a degree more esoteric than your Pixar or DreamWorks fare when our hero starts battling a mechanical zebra midway through the film. The film’s quirk is only deepened by the film’s staunch refusal to explain its mechanical reincarnation mysticism to the viewer, which ultimately works to the film’s benefit. At just a hair over a half an hour long, the film can’t afford to bog the audience down with unnecessary details, opting instead to focus on telling the best action/love story it can in the limited amount of time it has. Coffee Samurai does its best to balance its few action scenes with scenes that build its character’s arcs. We’re not shown how an ancient samurai becomes a vending machine, but we are shown that this particular one enjoys reading Antoine de Saint-Exupéry’s The Little Prince and cooking using his magic sword when he’s not busy fighting evil or vending coffee, and these small character details are decidedly more important in a film like this. 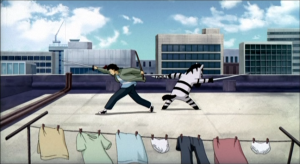 CoMix Wave Inc
It was really tough deciding which images to use for this post. You have no idea.

For a short that’s over and done in 31 minutes, the film budgets its time incredibly well. Using dual narration, Coffee Samurai introduces its protagonists separately, introducing us not only to the characters but also to the lonely corners of the city they inhabit. Despite its massive size, the worlds Jin and Hemi dwell in are isolated and quiet, establishing the pair as marginalized souls who are lost in a mechanical landscape (one more literally than the other). Their relationship works for the viewer (or at least this singular internet critic) because despite their serious differences, the film constructs these characters as two kindred individuals. The film’s shift from action-heavy farce to gentle romantic comedy before the final confrontation mirrors Jin’s own shift, as our hero drops hit guard and begins to focus less on being a “supreme warrior” and learns to be an emotionally honest coffee machine-man. Hemi, who has a sleepy mechanical quality all her own at film’s open, learns to accept Jin for what he is (perhaps with more aplomb then most, sure) and makes the valuable human connection she’s missing in her life.

Through all this gentle exploration of life and love in the city, the film never forgets its sense of humor. Perhaps due to its short run time, the sight of Jin as a walking coffee machine with sad, world weary eyes never stops being funny, even as the viewer empathizes with him. Rife with site gags and quirky humor, Coffee Samurai is always fun, even at its quietest. The final battle against an unexpected enemy is absurdist humor at its best. 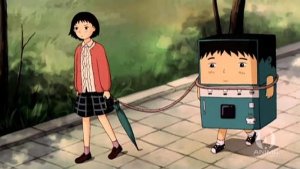 CoMix Wave Inc
Seriously, every image I found is a gem.

Coffee Samurai’s fight scenes are fluid and a joy to watch. With parody and homage to classic tropes and clichés of samurai films generously sprinkled in, the action is riveting even—nay, especially—when it’s at its silliest.

At a half hour run time, Coffee Samurai is a fun, funny, and surprisingly poignant anime short. At once incredibly broad in story and hyper-detailed in character, elements that would be aggravating in a feature work well for the short, Coffee Samurai is a fun short-form story and an ideal starting place for viewers new to Anime looking to get a sense of the wide array of stories that can be told in the medium.

Look for Coffee Samurai on Hulu, on DVD, and through finer internet searches.