So lately I’ve been doing this Reddit thing, talking with other people about stuff, mostly horror and The Strain, and the consensus around the block is about the same. The Strain is a halfway-executed horror show with some misplaced focus and some gaping plot holes. Some of these are explained away later and are meant to be suspenseful, others are remnants from the book that are never quite realized, and some are just, y’know, plot holes. I’m convinced, because I want to like this show very, very badly, that some things are subtle, and this whole season should feel like a steady climb to epic horror proportions, but right now we’re still in mid-yawn. The thing that keeps me coming back, aside from my voluntary obligation the site, is the monsters. The strigoi are waaaaay too cool to abandon.

This week, with the eclipse approaching, the rat exterminator has discovered where the bodies have been hiding (although they’re not as hidden now). Eph has gotten himself kind of locked in the CDC, but Jim helps him escape. Either way he’s been cut out of the CDC and presumably must turn to Abraham for exclusive help. The episode begins with some well-warranted exposition in the form of voice-over news reports, finally telling the viewer what’s actually going on with communication and the like. Finally, some insight into how badly people are panicking, despite most of our main characters carrying on as per normal.

One of my big critiques is that the show feels very clunky for a del Toro-inspired work, who is normally the kind of person to inject art into every shot. I was somewhat rewarded for my patience this week in the below shot, featuring a close up on a padded door that definitely evokes a coffin before panning out to the wider shot seen here. This shot, as you might imagine from the disturbing sense of what’s going on, is actually a fantastically creepy scene. We are immediately transported to Eph’s wife’s house for some good old Eph-hunting, as the CDC/government is tracking him down. That scene ends with clunky dialogue, as The Strain is wont to do. 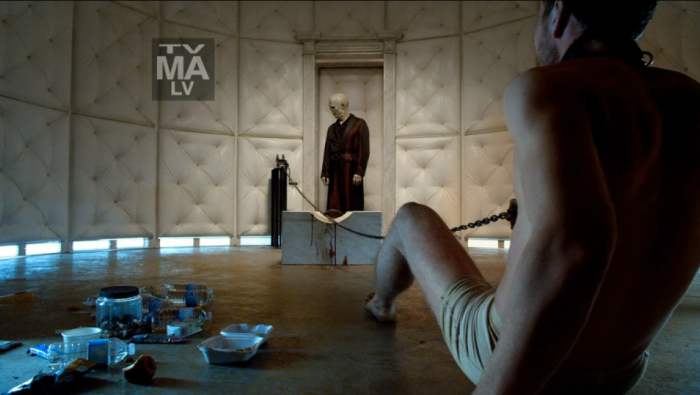 Insert some awkward character development (the only Jewish hispanic gangster ever) and some more annoying Eph’s family bull. Corey Stoll gets to do some actual acting this episode though, so that’s kinda refreshing. Eventually he gets pulled in, because his wife’s new boyfriend is a tool, but, color me intrigued. Now, there are still increased sirens and such in the background, but everyone in the suburbs are still not acting like everything is weird. At least Eph’s wife is capable for sticking up for herself.

Good news everyone – Abraham is still killing everyone. At least someone is doing their job. He heads into a house that looks post-funeral, but was interrupted. He heads into the bloodiest basement I’ve seen in a long time, accompanied by rhymthic thumping in lieu of music, like a heartbeat. Abraham’s hearbeat. He’s old, he’s not as used to doing this kind of thing anymore. He’s not prepared for a house full of stigoi, but they’re not capable of withstanding sunlight (Hint hint, that’s why the eclipse is important). Cut to Nora and her mother with dementia, who decides that fleeing the FBI is also a good idea.

I’m finding that the ability of our dear Mr. Silence to act like a German officer no matter the circumstances is quite interesting. Our hispanic gangster Gus finds this out the hard way when he tries to turn down a job to dispose of Redford’s body (I assume). Eph’s interrogation is not going well, by which I mean it seems to defy logic and reason. The rat killer returns to his office, drops a tie-in with Abraham’s exploding house, and finds his office empty. Probably not good. we do, however, get to see our first parasitic death via ultraviolet rays. Escalation. It’s a good thing.

As per usual, this is about the halfway point, so I don’t want to reveal too many spoilers. The rest of the episode includes awkward non-human levels of communication and Jim being awkward. A lot of awkward. Better than last week, improving daily. I still have high hopes for this show.