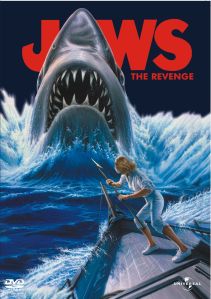 I’m not sure where to start with this one, but, I guess I’ll start with the uh, the plot. Martin Brody has passed away – he had a heart attack, but don’t let that stop you from blaming the shark, because Mrs. Brody (reprised by Lorraine Gary) certainly doesn’t. She continues to live at home with Sean, until he’s also killed by a shark. It’s juxtaposed against Christmas carols, it’s pretty magical. Mike flies in from the Bahamas where he lives with his family, and talks Ellen Brody to follow him down to the Bahamas for some much needed R&R. She consents, but only because there are no great whites in the Bahamas. OR ARE THERE (hint: There totally are, for the purposes of cinema). 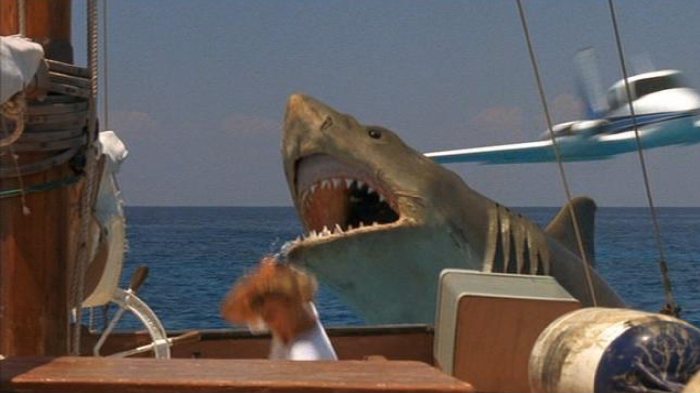 Mike Brody, by the by, is a scientist now because SeaWorld was never a thing. He’s been tracking conch shells with a Jamaican partner, and they basically just constantly lament about funding. Ellen Brody meets Hoagie, the carefree pilot, played by Michael Caine, and they have a cute little romance that’s really only supported by Ellen being shark crazy. She’s convinced that the shark has been targeting her family specifically, and it will follow her to the Bahamas. She frets about Mike working in the water, and she develops a ‘shark sense’ that’s really something to behold.

Now, the thing about Jaws 4 is that it’s kind of amazing in it’s own right, although the honor of best sequel will always be the third (for me). First of all, just having Michael Caine as a cheeky Bahamas small plane pilot is kind of delightful. Secondly it features a lot of tense-under-water-conch-hunting madness, and also, as mentioned, Ellen Brody now has shark sense. It’s like, Jaws goes on vacation, but we all get treated to the spectacular slide show afterwards.

Debatably the fourth film also features the most majestic shark death scene in any of the Jaws franchise. Spoiler, but, y’know, the shark dies. And it’s seriously magnificent. Now, the shark itself leaves much to be desired. As I’m sure you’ve all noticed by now, the special effects and animatronic shark are not quite up to snuff, especially not compared to the first film. Again, since there’s no point in hiding the shark it’s prominently featured and it detracts from any semblance of fear that might have been inflicted.