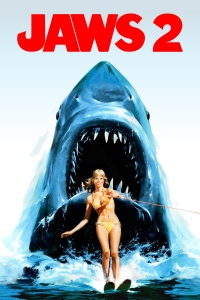 Lesson – If you’re a teenager in Amity, you probably shouldn’t swim. Ever.

In our continuing theme of Shark Summer, we move from the classic Jaws to the slightly-less-classic Jaws 2. I made a post on good old Reddit, and the second film seems to be the least favorite sequel (with one brave objection). I think that’s probably for a good reason. Note: Wikipedia regards it as the best. I have no idea why.

Jaws 2 features some repeat actors (Roy Scheider, for one), but not a repeat director. I think it’s fairly well-known that Spielberg despises sequels, and Jaws 2 was just not going to be in his repertoire. Really, the beginning of the movie makes it clear that we’re in the same universe, and while there’s similarities (for one, a large shark), this movie has a very different tone. We already know who the villain is, there’s no need for a dark night attack, instead we get a nostalgic violent one at the wreckage of the Orca. Yes, we’re still in Amity, and yes, this is a bit more ‘horror’ classic, with a focus on people, teenagers, and summer romance. Some people don’t feel that Jaws is horror movie, and Jaws 2 really tries to remedy that.

Jaws 2 is a lot more like a slasher movie, featuring long chase sequences, seeing through the killer’s eyes, stuff like that. Also featured – the surprise second bump. One dead, one unsuspecting, boom. Two dead.  This happens at least three times (minus one convenient occurrence to lend some credit to Brody’s story).

In my opinion, the biggest problem with Jaws 2 is the huge hole in the middle of the movie where there’s no shark because Roy Scheider is trying to convince everyone that there’s a shark. It’s not engaging, because his character isn’t ultimately that endearing, despite his heroics and family values. In the first movie he’s sort of the glue between Quint and Hooper, the law figure that has cultural control, he’s the executor of plot. In the sequel he doesn’t really have good responsibility, because he’s kind of a dick. He ostracizes himself, and the blame game escalates because it has to. The first movie was the cutesy, “There’s a shark I don’t care about money.” but now they have to go beyond that, so it becomes, “Martin is a little bit crazy and thinks there’s a shark what an idiot let’s go in the water despite mounting evidence.”

Universal Pictures
“It’s right behind me, isn’t it?”

The end of the movie features a lot of teenagers corned on a pontoon of sorts, made of lashed together partially sinking boats, cornered by Jaws, trying to be rescued by helicopter/police boat by Brody. It’s decently tense, but it’s sort of too-little-too-late, and for me I can’t look past the shark model because of the lack of tension. Ultimately, Jaws 2 is kind of a lackluster sequel that doesn’t benefit from gritty suspense or have the nostalgia lens. Plus, since it features a not-endearing Brody and some snotty teenagers but lacks the satisfaction of a true slasher flick, it ends up being mostly disappointment.