First Thoughts: Watching Hannibal cook is making me re-think my views on cannibalism.

So this episode starts with Will teaching a class about the Ripper, who apparently kills in “sounders” of three. But James, what’s a “sounder?” I’m so glad you asked, disembodied voice. A sounder is a small group of pigs, which, as Will so kindly explains for us, is how the Ripper sees his victims. Since we now know that Hannibal is the Ripper, that evaluation is pretty spot-on. Good job, Will. Ten points for Gryffindor.

Next, we have an intense close-up on a human throat. If you’ve ever wondered what goes on inside when someone is singing opera, now you know. I wonder if it’s just a neat visual thing, or if they’re showing us the way that Hannibal sees people, even when they’re giving him art. I…am leaning more towards the former than the latter, but its defs something to think about.

At the opera, Hannibal runs into a Aunt Vivian from Pushing Daisies as a high society woman—which Baltimore has, I guess—who asks why he hasn’t had one of his fancy-ass feasts in a while. Naturally, she phrases it way classier than I just did. He tells her that he’s been waiting for inspiration to strike. Given his whole cannibalism thing, that sounds kind of ominous.

The good Dr. Lecter also runs into a sketchy patient from an earlier episode. Franklyn is clearly drawn to Hannibal, and his efforts to appear cultured in order to ingratiate himself with his psychiatrist are…sad. Frank has also brought along a friend, Tobias, who seems kind of weird, but also genuinely cultured. So…perhaps a bit like Hannibal? I’ll answer that question when I finally get around to recap-ing episode eight.

Meanwhile, or maybe later, Jack is still haunted by the loss of Miriam Lass. He gets a phone call in the middle of the night, and clearly expects it to be the Ripper taunting him again. But it looks like Hannibal is done with the spooky phone stuff for now, because it’s just a normal work call. And by that I mean that there’s some dude dead in a bathtub, and it looks like he may have been killed by the Ripper. Will has a good line when they’re in a car on the way to a crime scene, as he’s telling Jack not to let the Ripper get to him: “The only reason he gave you Miriam Lass’ arm was so he could poke you with it.” Very true, and I just like the phrasing. Also, I like the image of Hannibal playfully poking Jack with a severed arm.

Psych! He wasn’t killed by the Ripper at all, at least not according to Will. We get this episode’s empathy power scene—complete with a brief appearance by the raven-feathered stag—in which Will realizes that the killer was actually trying to save the victim when he cut open his chest and squeezed his heart. I’ve never thought to do that in response to a heart attack, but then again, I’m no doctor. My lack of an MD aside, the killing doesn’t fit the Ripper’s M.O. as nearly as Will would like.

That’s a pretty sweet bathroom ya got there.

And now we’re back to Hannibal’s sketchy patient Franklyn, who just wants to be friends. Of course, he also has a fantasy about befriending Michael Jackson in order to “save him from himself.” Not for any weird sex stuff, mind you, but just so he can “touch greatness.” Hannibal, ever the consummate professional, tells Frank that he’s not his friend.

Oho! It looks like Hannibal sees a psychiatrist too, and it looks like she’s Gillian Anderson! Actually, she’s definitely Gillian Anderson, which is pretty cool, even if you never really got into The X-Files. It also looks like she’s a very perceptive psychiatrist. She knows that Hannibal is hiding something, even if she likes him well enough not to assume that he’s a serial killer. Dr. Du Maurier sums him up pretty well with: “You are wearing a very well-tailored human suit.” Yes, Hannibal is definitely pretending to be normal, and yes, he looks awfully dapper while doing it. I also like that after telling a patient not to cross the patient-psychiatrist line, Hannibal has to have Bedelia tell him that he’s not her friend, just a patient and colleague with whom she can share wine. Which I’d say is a still a pretty good consolation prize.

I mean, she’d be pretty cool to hang out with either way.

And then we get a third scene with Hannibal trying to define a relationship, as he asks Will if he sees himself as a friend or a patient. “Yes,” is the answer. Since Hannibal is concerned with a little more than friendship at the moment, he also uses their conversation to mislead Will and the FBI, suggesting that maybe the Ripper is actually a group of organ-harvesters cleverly covering their tracks. Fabricating a diversion to serve as a real diversion? Devious.

Next we have Hannibal seeing a doctor for some—presumably routine—blood tests. The doctor’s kind of rude, so I guess murder is Hannibal’s way of saying: “hey, don’t get short with me, buster.” Which is kind of hilarious if you picture Danish Superstar Mads Mikkelsen saying it.

In retrospect, that “don’t get short with me” joke from the last paragraph is both inappropriate and kind of punny. Because he cut the guy in half. I guess he fell short of Hannibal’s expectations. Dude. Sorry. Although you could also say that he was only half the doctor he should have been. Dude! Okay, I’m done.

So now the whole Ripper/Organ Pirates (my term) is causing some heated debate in the lab. Z—who for some reason I have never referred to in one of these reviews—is being kind of a dick to Will about the whole thing, since Will is still sure that the bathtub victim from earlier wasn’t killed by the Ripper. It’s almost like Hannibal is using misdirection to try and tear the team…in half. Heh. There is definitely something wrong with you.

Z just isn’t half as clever as he thinks he is (last one, I swear).

Meanwhile, possibly at the same time, Alana is cooking with Hannibal. She likes beer! And Hannibal brews fancy-ass beer in wine caskets! And Alana doesn’t want to talk about Will because she just wants everybody to leave him alone! And Hannibal wonders why they never had an affair (Hannibal and Alana, that is)! I’m not sure why I’m using so many exclamation points, but aren’t you excited now?!

Oh man, now Jack is having waking nightmares too. We already knew that Will was the new Miriam, but seeing it from Jack’s perspective is still pretty intense.

Aaand cooking montage! Served with opera and a side of heavily implied murder! Okay, I’m sorry, I really don’t know what’s going on with all the exclamatory sentences. Next thing you know I’ll start writing in all CAPS!!1!

Hey, Franklyn’s back. Also, he’s not gay. He really, really wants you to know that. Also also (that’s how that works, right?), he and Hannibal are “cheese folk,” which makes it sound like they should be hanging out in the Shire.

Aw, Will missed his appointment because nightmares. He’s started seeing himself as Abigail’s new murderdaddy. Poor guy. Hannibal feels miffed, so he finds Will to tell him that it’s okay he missed his appointment, because they’re friends. Then they have a nice, friendly conversation about how the Chesapeake Ripper is taking people’s organs because he thinks they don’t deserve them. In principal, I guess he should hit up some college campuses for livers, but let’s be honest: they probably wouldn’t be in very good shape anyway. That was a joke about how college students drink a lot. 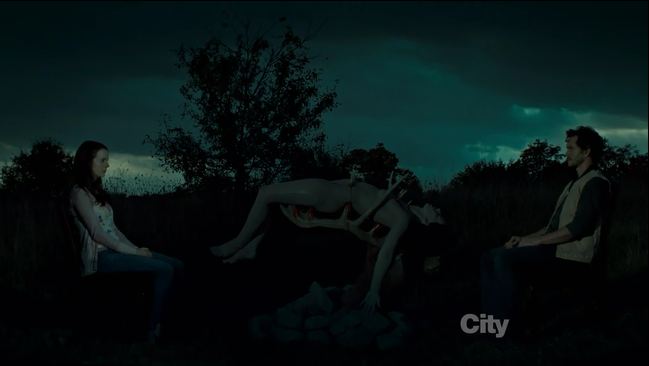 Man, your subconscious is not a happy place to be.

Oh snap, for second the FBI thought that they’d found the Ripper. Sadly, it was just an Organ Pirate trying to steal some guy’s kidney. Good thing they brought Hannibal along to watch, since he’s pretty good with organs. Y’know, what with being a former surgeon and all.

After all the excitement is over, Hannibal gets to prepare a fancy-ass feast. Since Will isn’t really big on the whole “socializing” thing, he just brings over a bottle of wine and leaves. Not before having a conversation with his bud, though. He asks why Hannibal quit being a surgeon, and he’s told that Hannibal failed to save one too many lives. Dr. Lecter also says that: “I transferred my passion for anatomy into the culinary arts.” It’s a good line, even if it leaves out the bit where he murders people and uses their organs for meat. I guess that wouldn’t have been as eloquent.

The episode closes with the fancy-ass feast come to fruition. I may not be big on eating people, but dayum, that is some good looking food.

A toast, to how all of the meat here is secretly people.

Recap of the Recap: Overall, I think this was a much stronger episode than the previous one. It’s a nice continuation, but all of the murder stuff feels necessary. We still get to see people affected by the terrible things we see, and we also get to see a lot more Hannibal than we have been. And I do love me some Mads Mikkelsen.

So what do you guys think? Are you disappointed that the Ripper’s ripping wasn’t part of some grand scheme? Or do you think that it’s kind of awesome that Hannibal has been taunting the FBI while he kills to get meat for a fancy-ass feast? Also, what do you think about cheese folk? Are they real? Do they know the muffin man? Let me know what you think in the comments, because I can’t read your minds.