We’re more than halfway, folks! Episode 8 of the scheduled 15.

Dare I venture to say that this is turning into quite the good show…? It still has a lot of faults, to be sure, but the things that I like about “The Following” are the choices they make to be unconventional. For example, this week starts with Joe trying to connect with his son. He lacks the psychotic nature when talking with him, and I’m wondering if it was an acting decision or a purposeful one. Joe is -not- a psychopath incapable of emotion or connecting to other people. He’s a person with killer tendencies. Is that scarier?

Oh hey! We get to meet Roderick this week. And he’s a sheriff! Who likes…potato salad. Sure. In real news, this just affirms the atmosphere they’ve been trying to accomplish the whole season, where a Follower can really be anyone, and sometimes that anyone is in charge of things. Trust no one.

In other, slightly related, unsurprising news, Kevin Bacon gets to be a smartass this episode. Like the entire episode, minus the sentimental end. They also seem to have abandoned his rampant drinking problem, which is good! If he struggles once in a while, that’s fine, but I’m glad they didn’t maintain the whole vodka-water bottle ruse.

Cyanide pill in the hand! WHAT. I don’t know about you, but the last thing I expected was the guy to bite into his hand, but then also die. So there was that.

So let’s address what went down with Mike, shall we? I think there was some solid suspense buildup, but also that interrogation fight club is kinda dumb. And Charlie’s character has always confused me, this being no exception. Steel pipe, by the way, will totally mess a person up. Sucks to be Weston today. Good thing Kevin Bacon and cult-chick were there to save the day sort of.

Can you spot Kevin Bacon in his natural habitat?

I’m sending the entire cast of “The Following” to ‘Shoot the tire of the car that’s driving away’ school. SHEESH.

I think that Joe is getting set up for a fall. Roderick is too strong of a character to work in tandem with Joe, and once they find Claire, the playing field is leveled and there is going to be trouble. See, right now Roderick owes Joe, but that balance can/will change. So get ready for that.

On that note, Joe finally murders someone (on screen) and it’s actually alarming. I mean that girl tied up in the basement, initially, but then Charlie later. For a murderer, we didn’t get to see too much and I think that it required some blind faith on the part of the audience and it was starting to fade. I’m glad they spiced it up a little bit.

Food for thought: The entire Charlie death sequence is kinda wonky, isn’t it? Oh hey, I brought a switchblade and a plastic sheet. Please kill me kthnxbai. Apparently this cult has a 2-strike system. Really though, it’s the fact that everyone seems a little surprised by this, and then the entire thing is so darned romantic. Crackling fire, good glass of wine, a good stab to the stomach…wait.

Pictured: Charlie dying. Not an intimate embrace between male lovers.

Fox: Where even serial killers maintain Christian family values. Joe and Emma. Who didn’t see this coming? Emma will have sex with anything that has stabbed someone else. There is something VERY Freudian about that, I’m sure, but seriously.

You know what I like? I like when my theories are consistent. This week’s end montage featured ‘How the Gods Kill’ by Danzig, a slow song with ethereal vocals that escalates into grungy passionate singing. Wheeeeee! 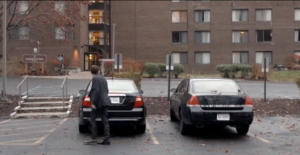 One thought on “Rooster Recap: “The Following” Episode 8: Welcome Home”