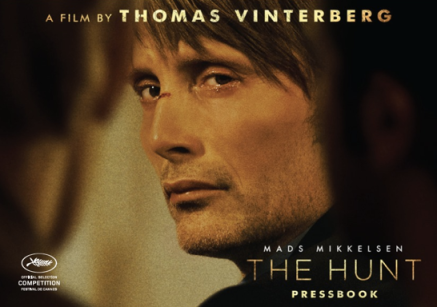 The Plot: Lucas (Danish Superstar Mads Mikkelsen) is a mild-mannered, lonely man who teaches at the nursery in his small, secluded hometown in Denmark. Things finally start comin’ up Milhouse when he strikes up his first romantic relationship since his recent divorce, and he begins to reconnect with his estranged son. Now, because this is a Danish movie, the happy stuff only lasts about fifteen minutes. Lucas witnesses his life fall apart after he is wrongfully accused of sexually abusing one of the children in the nursery. As the town persecutes him and he battles to prove his innocence, he must also struggle to maintain his humanity and decency as he is pushed to the limit.

First of all, just to get it out of the way, let me start by saying that I absolutely love Danish Superstar Mads Mikkelsen. His career right now is a nice balance of appearing in a supporting role in a major blockbuster (Casino Royale, Clash of the Titans, King Arthur, The Three Musketeers) and being the leading man in a dramatic Danish movie (Flame and Citron, Valhalla Rising, After the Wedding, this movie that I’m reviewing right now). That seems to be working pretty well for him. Though not always evident in his blockbusters, this dude can act. I find that he usually preserves his chops for the Danish features, though. Also notable is the fact that several Danish girl magazines have voted him Sexiest Man in Denmark consistently for the past x years or so. The Danish magazine Woman even voted him Sexiest Man in the World. Let me just insert another picture of him, so you can fully appreciate that statement.

Danmarks Radio
Bradley Cooper’s got nothing on this guy. Denmark, am I right?

All right, enough of my fangirling. What I really wanted to say is that Danish Superstar Mads Mikkelsen delivers the best performance of his career in The Hunt, which is really saying something considering some of his other roles, particularly in After the Wedding. He transforms himself from a badass, scary Danish Superstar and also apparently the sexiest man in the world into a shy, sweet, downtrodden man with little strength left with which to face the world. Lucas is a very demanding and difficult character. We know from the beginning that he’s innocent, and he is really likable. This movie is just two hours of injustice, but Danish Superstar Mads Mikkelsen manages to make Lucas entirely sympathetic without being overly pathetic. This is, unsurprisingly, a sad movie, but no one is ostentatiously tugging at heartstrings, and no one is asking you to be sad. This isn’t a little red coat in a black and white movie… man, maybe I’ve been picking on Schindler’s List a little too much recently. I should apologize or buy it a drink or something just so it doesn’t feel too bad about itself. Anyway, my point is that The Hunt makes you feel sad naturally. Like all really perfectly sad movies, I am once again recalling Take Shelter and Bicycle Thieves, The Hunt just plays out, and though it doesn’t stab you directly in the soul, you do pick up a little sadness radiation as it passes on by.

Danmarks Radio
You see? His jacket is brown.

Now, Danish Superstar Mads Mikkelsen did not achieve this perfection all on his own. Equal, or perhaps greater credit must go to the writer/director Thomas Vinterberg. Boy howdy, is this ever a skillfully directed film. Every shot is so evidently, consciously set up; the staging is perfect; Vinterberg is always careful about who is standing and who is sitting, where they are in relation to one another, and where his camera is in relation to them. Furthermore, this is a damn pretty film. Cinematographer Charlotte Bruus Christensen certainly earned her paycheck. Her photography of the Danish countryside is beautiful, but also subtly sinister. Much of the film takes place in autumn, so she really utilizes the way the sun breaks through orange leaves and bare branches to great effect.

The original score, by Nikolaj Egelund is pleasantly minimalistic and somber, consisting mostly of a solitary acoustic guitar, occasionally interrupted by some woeful strings and a melancholic xylophone. The simplicity of the score rather nicely reflects the overall tone of the movie, the concentrated, personal nature of the conflict, and the reserved, quiet internalization of Lucas’ anguish. Moreover, the music is used infrequently; for a runtime of 115 minutes, the score only amounts to about sixteen. By and large, The Hunt is a disturbingly calm movie. I found myself silently urging Lucas to lash out, to scream, to get angry—something. If he did that, though, perhaps the film would be less perfect.

I’ve been using that word, “perfect,” a lot in this article, four times, actually. I have to seriously assess, now, is The Hunt a perfect movie? That’s a powerful word. There are not many films that I would describe as truly perfect, only a handful, I suppose. The Hunt probably isn’t perfect, but it is pretty damn close. I should admit, though, that my analysis is a little bias (and not just because of my love for Danish Superstar Mads Mikkelsen). As a man who works in a nursery, I found this story particularly hard-hitting. Because of overwhelming statistics, most parents have a severe prejudice against male childcare providers. It’s unfortunate, but true, and maybe they’re right to be wary. With a few exceptions, it can take a lot of effort to gain a parent’s comfort and trust. And, when working with children, all it takes is an accusation, unfounded or not, to completely ruin a life. Regardless, no one will ever look at you the same way again. The Hunt is a great representation of every childcare provider’s worst nightmare. It’s a risk, sure, but I think that at the end of the day it’s worth it. 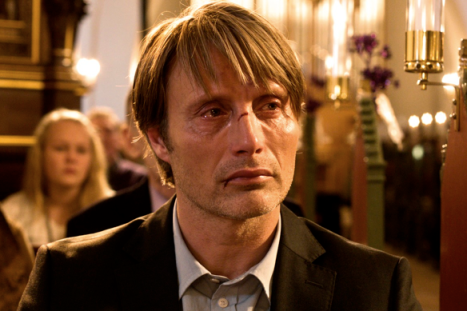 Danmarks Radio
Would you agree with that statement?

7 thoughts on “Second Breakfast Fangirls (verb) about ‘The Hunt’”