It was only a matter of time before I infringed upon Mindless Action Mondays, right? This only leaves Single Malt Movies and Strange Bacon that I haven’t done, so I’m thinking maybe later I’ll watch a Canadian movie and base a mixed drink on it. It’ll be a blast. Anyway, Drew won’t care, since he’s still in the throes of his Madsathon, honoring Danish Superstar Mads Mikkelsen. So, now that I’ve sort of justified this to myself…

The Plot: In 2011’s Fast Five, Toretto (Vin Diesel) and his team pull off an incredible heist in Rio de Janeiro. Taking the millions of dollars in hand, he, Brian (Paul Walker), Roman (Tyrese Gibson), Han (Sung Kang), Tej (Ludacris), and Gisele (Gal Gadot), are all enjoying quiet, private, sexy retirements around the world. When superbadguy Shaw (Luke Evans) assembles his own culturally and sexually diverse team of drivers, loveable government stooge Hobbs (Dwayne the Rock Johnson) has no choice but to bring Toretto out of retirement to help catch the bad guys. His logic being “you need wolves to catch wolves.” Hey man, I’m not going to argue with that guy. 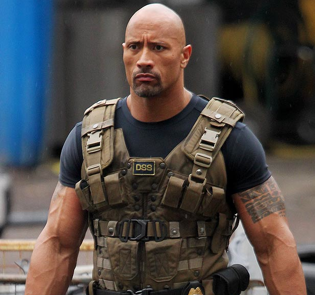 Universal Pictures
Would you?

So yeah, this is the sixth installment in the Fast and Furious franchise. It’s been an interesting progression. The first few films were just about street racing. The focus was on cars, explosions, and… cars. It wasn’t until later that they added elements like plot and character. Don’t worry, you still get plenty of those other things; it’s just all improved quite a lot. Now, before I launch into a full review, I just have one disclaimer: nothing in my training or experience as a film critic has prepared me for this movie. As I was walking home from the theater, I realized I couldn’t critique this film the same way I would other movies. I wanted to say that certain characters were underwritten, that the action was unbelievable, that it was too long, that it had a few too many chase scenes, but… ugh, but I can’t say those things, and here’s why:

I’ll say this, though, and let this be my one major complaint; Fast and Furious 6 is not a good title, especially considering previous films in the franchise. These can’t be the same geniuses who thought up 2 Fast 2 Furious, which is a great title for a movie.