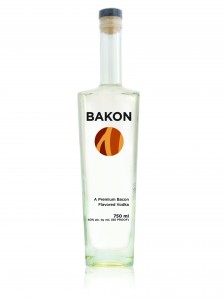 In a large pitcher or mixing bowl, combine all ingredients.  Stir well, cover and refrigerate for two hours (up to overnight) until flavors meld.  When ready to serve, divide the Bloody Mary mix between four cups filled with ice.  For more of a kick, rim the glasses with lime juice and then a sea salt and cracked pepper mixture.  Garnish with a slice of crispy bacon and some olives.

Plot: Kyle Fisher (Jon Favreau) is having a bachelor party in Vegas before he marries his sweetheart control freak of a fiancee, Laura (Cameron Diaz).  Kyle and his friends have got everything they need for a great party — booze, cocaine, strippers… but one of Kyle’s best friends accidentally kills the the call girl during a particularly intense moment of passion.  As they try to cover up the murder and make it home in time for the wedding, the body count increases and their friendships become extremely tense.

Don’t think I spoiled anything by telling you the stripper dies.  That happens in the first ten minutes.  With that, the movie very quickly transcends the line between quirky romantic bromedy and an Oh God what am I watching sort of dark comedy.  The Hangover is tame in comparison to this film.  Honestly, I’m not sure what else to compare it to in order to give it the sense of scale it deserves.  The plot is ridiculous, the dialogue is entertaining, witty, and dark, and the performances are fantastic.

No, really, how does this happen only 10 minutes in?

Most impressive is Christian Slater’s performance.  You already know he’s a sleazy character from the start.  He comes off with a very ingenuine 80s businessman sort of vibe, just trying to charm you into giving up all your money for things you don’t need to buy. You know who else was a sleazy businessman?  Patrick Bateman.  Turns out that character isn’t far off from Slater’s, as he ends up being responsible for most (all) of the murders in the movie.  He’s a charming smooth-talker and absolutely psychotic. 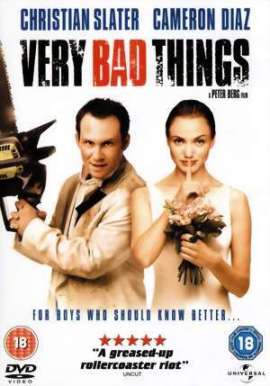 On par with Slater’s level of crazy is Cameron Diaz.  You can tell she’s a little neurotic in the beginning with her excessive and meticulous wedding planning, but aren’t most brides?  No.  The answer to that is no.  Diaz’ performance surpasses the stereotypical bridezilla and takes her manipulative love for her husband way too far.  You hate her for the entire movie, but she gets what she deserves in the most unexpected way.  Some sort of cruel and unusual punishment, I guess.  Slater and Diaz own their performances and steal the movie.  The other characters are fine too, but there’s some powerful tension to be found in watching two characters completely crazy in opposite ways sharing the hysteria.

Now I know there’s no cure for murder, but a hangover cure comes pretty close, plus it’s a Bloody Mary, to that’s kind of fitting.  Making a Bloody Mary, one of my favorite drinks, with bacon vodka was definitely and interesting experience.  When you pop the cork, you instantly smell bacon.  That’s not a bad thing.  The first sip quite literally tastes distinctly like both bacon and vodka; the flavors don’t blend together that well.  A few days after the bottle’s been opened, however, the flavors start to mesh.  Unfortunately, the bacon adapts to taste more like smoked raw bacon than charred, crispy bacon.

As a hangover drink, this fares pretty well, but not on an empty stomach (very bad idea).  I recommend it with a sausage, egg, & cheese breakfast croissant.  That combination ends up being much better.  The spices in the drink and the spices in the sausage go very well together.  On top of that, the salts are good for rehydration and the horseradish and garlic give your immune system a little boost.  All very good things for a morning after a ridiculous night.  Even so, if that’s a little too much for you to handle, bacon vodka, maple syrup vodka, and orange juice go very well together as a breakfast drink, although that’s nowhere near as nutritious.

Now you know — if you ever find yourself in a bad situation after a rough night, you can still (healthily?) drink it off with a Bacon Bloody Mary.  Enjoy!