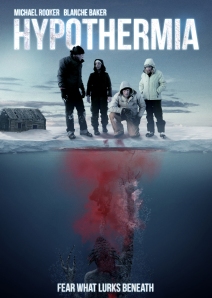 At first blush, this is kind of a pretty movie. It starts with some nice credits, time lapse shots, beautiful scenery and really wide angle shots. All things considered, the movie itself is fairly well shot.

Now, that being said, this movie has a lot of faults. A lot. Namely, the synopsis is listed as ‘bickering families’, so naturally I’m wondering what they’re bickering about. Well, it’s pretty easy to see.

Family 1 is a nuclear family, strong and sweet and awesome. Son and girlfriend are going into the Peace Corps. They fish the old fashioned way. 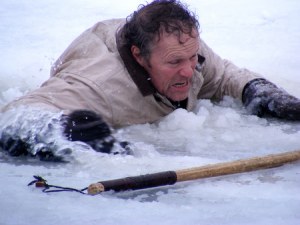 Family 2 is a father/son duo, and they’re douchebags. They bring the best (and arguably unnecessary) equipment, they drink all the time, they curse every five seconds.

However, what’s the great equalizer? A monster. Specifically, a monster that takes its sweet time to show up. As the audience, we’re treated to a lot of predator-vision, and let me tell you, it’s annoying as hell. Actual predator vision is heat targeted, and there is some semblance of clarity. This was just ‘ice that’s orange and red’. Ugh. 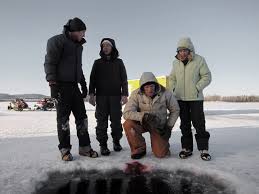 The acting is okay for the most part. I found the beginning half the best, and then the second half lost a lot. These are actors made to look like family, not made for panicking in a horror movie.

Let me get to the crux of the issue – sloppy SFX. This creature is lazily made. It’s amateur work that doesn’t match the style of the movie at all. The consistencies of ‘under the ice’ and ‘in the water’ and ‘above the water’ are lacking. Brazenly, the filmmakers decide that it doesn’t matter at all and show the creature in all its glory. A lot. In full daylight.

Speaking of which, the family takes this all in very carefully. It’s ‘obviously a missing link’ observes the son. It ‘apparently has poison’, because why not. The wound prosthetics are okay for the action shots, but the stagnant and infected wounds are not accurate and there is a lot of lifting from the skin (poor application/styling). I’m kind of a stickler for this, so the only thing that impressed me was oozing wounds.

I don’t usually enjoy spoiling films for you guys, but this is the only movie that I’ve ever seen the monster get talked out of killing someone. So there’s that.