I will now give you a brief, concise history of my experience with magicians. When I was but a wee little sprog, I possessed an acute fondness for magic. Were I to trace this to an exact source, I would lay the blame with Merlin from The Sword in the Stone. I was never convinced in magic as a reality, but I liked to wonder at the possibilities. This gave way to an interest in magic tricks, which were the best available alternatives to actual spells. So, for one of my younger birthdays, my parents gave me a magic kit. It came with a little wand, cards, a selection of mirrors and boxes and cups and balls, and though my parents were decent enough folk to humor me through each of my attempts, it soon became evident that I lacked the coordination, speed, and mathematical prowess to be a real magician, and I promptly gave up, as was the style at the time.

While I had abandoned my aspirations, I had not given up my affection for wizards and real magic. Merlin led to Dumbledore, who gave way to Gandalf. Then, in 2006, Christopher Nolan’s The Prestige came out, and I remembered how cool magicians were. Alas, this appreciation of magicians was short lived, and left as quickly as it had come. In 2007 I read The Great Gatsby. Now, I was a high school student at the time, therefore deep in the manacles of a coddled ignorance. Wielding this naivety like a flaming cudgel, I assumed, based solely on the title, that it was going to be about magicians. Sorry, F. Scott, but why would you use the prefix “great” for a character who didn’t do magic? Then I had one of these moments:

The revelation as to the actual subject of the book was devastating, and not only hindered my enjoyment of The Great Gatsby, but also made me feel betrayed by magicians yet again. Regardless, it wasn’t until college when I finally got around to watching Arrested Development that I was once again okay with magicians. It had been a turbulent relationship, for sure, but everything was set right again.

Then, last year I was taking a screenwriting class. One of the other students in the class was telling me about the screenplay he was working on, which was about a gang of magicians who rob banks, and I thought, “Oh, that sounds fun.” A few days later, he came to me to announce that someone else—someone in the biz—had the same idea that he had. This caused him to lose all motivation in finishing the screenplay (thought I believe he did, because it was graded), and caused me to think, “Oh, that sounds fun.”

So, I know what you’re thinking, that little question just nagging in the recesses of your mind, begging to be answered: what effect did this movie have on my on again/off again romance with fictional magicians? Don’t worry. I will get to that, but not before I finally review this movie.

Now You See Me is a fun time, and plays out just like a magic trick. First, you get an energetic, but slightly mysterious introduction to the magicians, and then they gain your trust and amazement with a few harmless lesser tricks. Once they’ve done that, they announce to you exactly what they will do, but not how they will do it, and therein lies the magic. So, whether they’re making a rabbit disappear or stealing a hundred and forty-four million dollars from Michael Caine, you’re intrigued enough to watch, and to wonder. They perform the trick and you’re all, like, “WHAT! Oh man that was awesome! How did they do that?” If they’re good magicians, they will disappear in a puff of smoke and leave you feeling like you got your money’s worth. If they’re bad, they will painstaking explain how everything happened in a smug, unnecessary flashback/montage/voiceover sequence.

Summit Entertainment/Lionsgate
Taking after his brother, Dave Franco is good at being smug.

So yes, Now You See Me is just a flashy magic trick. It’s compelling and fun to look at, but ultimately lacks substance. None of the characters are real people. The few scenes when we see the magicians off stage are great, because their banter is strong and funny and we almost get hints as to their personalities. Unfortunately, they spend most of the show on stage, at which juncture they are strictly performing, and none of them are individuals in any meaningful way. Now You See Me fails as a movie in that respect. Clearly, the filmmakers wanted to mirror a magic show, so do they succeed in that way? Not really. Magic shows are fun because you are seeing them live and marveling over the tricks and the skill. If you watch a magic show movie, the explanation is simple: cuts and CGI. There’s nothing to marvel at. 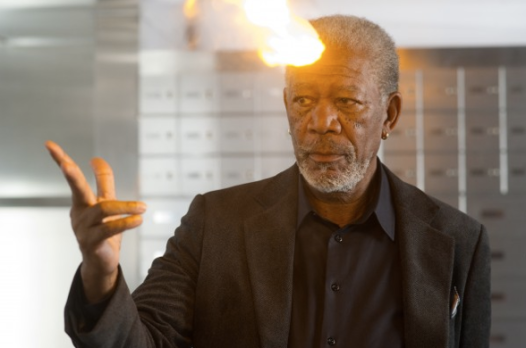 Summit Entertainment/Lionsgate
Except when Morgan Freeman SHOOTS FIRE OUT OF HIS FOREHEAD.

I was also well aware that I wasn’t watching real magicians. How did I know? They explain everything. Trade secrets, guys, come on. It’s like you don’t even belong to the Guild. In this case, like with so many flashy tricks, the explanation is what kills it. The ending is stupid. They wanted to have a big, unexpected twist, and while they did accomplish that, it’s only unexpected because it doesn’t make sense. The solution they went with was probably the least logical one. Furthermore, it’s difficult to care about such a twist if you don’t care about any of the characters. Alas, they would have been better off keeping it sparkly and shallow. In the end, though, this wasn’t enough to turn me off of magicians.

There you have it. I thought I wouldn’t manage, but I did spend more time talking about the movie than I spent on the introduction… or is it just an illusion?

One thought on “Second Breakfast: It’s Not a Trick; It’s a (Rooster) Illusion”