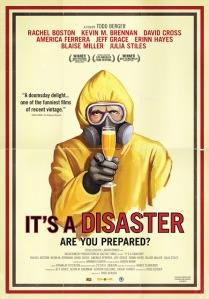 You can (and maybe should) buy this movie!

The Plot: Every year, four couples get together for a Sunday brunch, because that’s what grown ups do. Two are married, one is engaged, and the fourth kind of shifts, because Tracy Scott (Julia Stiles) keeps dating crazy guys. This year, she’s bringing along the polite, unassuming Glenn Randolph (David Cross). It’s their third date, so it’s kind of awkward. Things get even more uncomfortable when Pete (Blaise Miller) and Emma (Erinn Hayes) announce that they’re getting a divorce. Then all the power goes out and a neighbor comes over in a Hazmat suit to tell them that a bunch of dirty bombs have been set off downtown. Now Glenn is literally trapped at a couples brunch, and the formerly tight-knit group of friends is forced to confront two affairs, an indefinitely-postponed engagement, and their imminent deaths. Hilarity ensues.

Man, is there anything worse than a couple’s brunch? Well, yeah, tons of things. Okay…but they still seem like a terrible combination of awkward small talk and forced politeness. I do like brunch, though. Mainly because I super enjoy breakfast food, but hate waking up early.

This is hell for me.

Okay, so I’m assuming that the plot synopsis above has at least piqued your interest. Just based on that, this sounds like the kind of movie that should be both mildly uncomfortable and really funny. And you know what? It is absolutely both of those things. Pre-disaster, It’s a Disaster gets a lot of laughs just from having realistic characters deal with the awkwardness of a couple’s brunch where one couple is new and the rest are dysfunctional. The film keeps going with that after the disaster, but now all these f*cked up characters are finding fewer and fewer reasons to try to act normal. 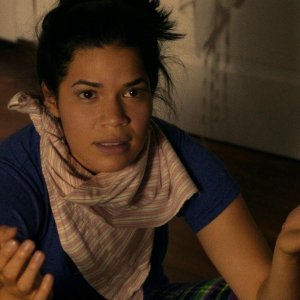 Unless homemade ecstasy is normal.

On that note, It’s a Disaster is one of the best post-apocalypse movies I’ve seen in a while. Seriously. They nail the “disintegration of society represented by a small group of survivors” thing. Barring one small instance that I’ll complain about later, everybody’s reactions to the disaster are very natural. For the most part, nobody acts out of character for the sake of either drama or comedy, and it’s really refreshing. Also, they managed to do an end of the world movie without going all “we’re the real disaster!” You know what I mean. *coughTheWalkingDeadcough*

This film walks a fine line between real human drama and absurd black comedy, and it only falters once. To continue with the fine line metaphor, It’s a Disaster is less like a rookie tightrope walker than a pro who’s just spotted his ex in the audience with another guy. He’s a pro, so he doesn’t fall, but you can see him stumble for a moment. Again, I’ll get to that later.

For the most part, everything works. This film is so far from being a disaster that it probably makes Roland Emmerich feel sick. There are plenty of moments of genuine emotion, but everything is balanced by this wonderful blend of dark humor and almost screwball comedy. Writer/director Todd Berger’s script understands what makes these people tick, so the ridiculous situations they put themselves in while they’re trapped in the house make total sense. Somebody pinch me, because I think I just watched a black comedy post-apocalypse movie with fully-developed characters. This is even better than that dream I had the other night where a tiger stole my pizza and then gently gnawed on my hands. 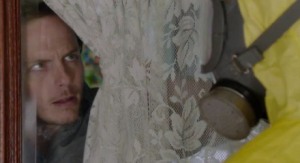 Nobody wants to hear your dreams, man.

That’s right. Not only is this movie really funny, it’s also got relatable, very human characters. The cast all give pitch-perfect performances, Julia Stiles and David Cross in particular. I don’t think that I’ve seen Stiles do comedy outside of 10 Things I Hate About You, and she is fantastic in this. There are so many small moments of great comedic timing in this movie that it’s hard to single anybody out, but believe me when I say that as the “serious” actress in a cast of comedians, she more than holds her own. Not that I want to downplay anyone else’s achievements. Blaise Miller, Erin Hayes, America Ferrera (yep, from Ugly Betty!), Jeff Grace, Rachel Boston, and Kevin Brennan all play their parts with the right amount of exaggeration and realism. They all feel like real people, but they’re also totally ridiculous. Speaking of ridiculous…

David Cross’ character, for most of the movie, has him playing against type. Fans of Arrested Development will know him as the delusional, dysfunctional Tobias Fünke, professional actor and analrapist (not what it sounds like). Maybe you know him from The Increasingly Poor Decisions of Todd Margaret, where he plays another pathetic f*ck up. Or perhaps you’ve seen him in Aqua Teen Hunger Force, voicing an obsessively religious/recovering drug addict banana and a suicidal doll. The point is, he’s known for playing extremely messed up losers, so it’s really nice to see him as Glenn, apparently the one level head of the group. He’s polite, patient, and kind. He’s the straight man to a cast of insecure fools. Except that a last minute twist means that he isn’t any of that. 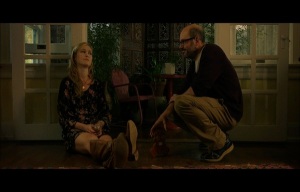 He’s about to go from Jiggle Billy to Happy Time Harry. I…know that means nothing to most of you.

Remember when I was talking about how all the characters in It’s a Disaster are fully-developed? I wasn’t being totally honest. SPOILERSPOILERSPOILER Towards the end of the movie, when everyone’s realized that they have maybe three hours before they all die horrible, violent deaths by chemistry, Glenn suggests that they finish the brunch that was interrupted by the announcement of Pete and Emma’s divorce and the end of the world. While everyone else is setting the table, he goes down to the basement and starts poisoning the wine. At first it seems like a really dark act of human kindness. But Tracy catches him, and he reveals that he is, yes, a Jesus Freak. Not someone who is religious and decent and such, but a full blown crazy who’s obsessed with the Bible. So now, all that stuff where he was a quiet, decent guy kind of goes out the window. Or does it?

At first, that twist really annoyed me. I liked Glenn. I liked the idea of having a Glenn in a movie like this. But at the same time, the revelation that he’s crazy fits in with the more absurd comedy in the film. Could they have kept the (totally fantastic) ending if he wasn’t crazy? Yeah, probably. Did his last minute transformation ruin the movie? Not even close. As far as I’m concerned, that was the one misstep in an otherwise fantastic film. If you’re a fan of dark humor, Julia Stiles, or brunch, you should totally check this out. It made me laugh out loud a ton. That’s enough laughter to feed a whole family for three days.