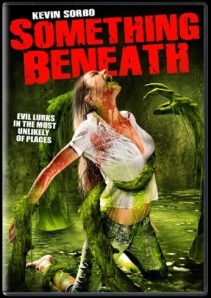 I thought I would change it up a little bit this week and watch something about an inanimate object. It has heavy religious notes and is drug suggestive. However, much like last week, the chick on the cover is never in the movie. Neither are those weird hands.

Something Beneath is a film about a sentient being that possesses hallucinogenic properties for people. It travels in the form of black/gray goo, which drips and oozes from most of the plumbing fixtures. There’s a moment where it’s skeletal, but it’s not really clear if that’s an old corpse, or part of the visions, or part of the critter. In either case, exposure = visions. This usually results in people dying, and usually in a horrific way after seeing their worst fear/past tragedies.

No…not this sentient being with hallucinogenic properties.

This is extremely confusing at first, because we see a man terrorized by construction machines, beheaded by a wire, and then found impaled on some spikey things by his buddies – with a head and no bulldozers to be seen.

Alright, I admit it. I watched this movie because it stars Kevin Sorbo. “Temptation is everywhere, my dear, you just have to know when to use it for good!” Oh, thanks out-of-context movie quote! I feel better now.

It was selfish of me, but I think we all learned something. I learned that this movie was kinda nice. Not a sleeper hit like The Relic, and not the same entertainment value as Piranha 3D, but decent. There is a lot of accidental-on-purpose referencing, which I always like to see in a horror movie. Lots of tongue-in-cheek commentary. Most of it in this movie is environmental. One of the victims, for instance, while practicing a speech, utters the phrase “We’re all going to die! You – and you, and you, you’re definitely going to die.”

I don’t know about you all, but when I think about where to set my horror movies, ‘A Conference Center’ is definitely the first thing that came to mind, so, I’m really glad this movie happened. It’s a bit full of social commentary, in that the conference under siege is hilariously about preserving the Earth, global warming, blah blah.

Kevin Sorbo plays a priest, because they are prolific and well-known activists in the sustainable/environmental field. He’s really only a priest because a) it’s funny and b) he has to ‘keep the faith’. 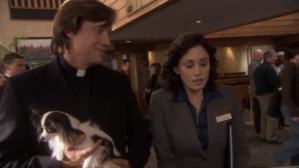 Now, normally the endings of movies save the mediocre state of a movie, but in this case the ending was SUPER disappointing. Actually, I think the reason that this wasn’t a ‘great’ movie is that it’s kind of missing a sense of satisfaction. This is true from the deaths to the plot to the love interests to the end. It’s kind of strange in that sense. 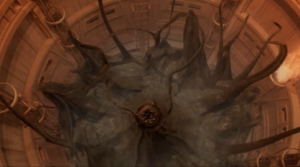 *Spoilers* There is this woman, Khali (Kaylie) dangling over this here monster, and she suddenly, in a moment of ‘faith’, whips out her grandma’s necklace and starts reciting the poem that came with it. She’s Native American, so in horror movie logic, basically a God that can fix everything. The beast kind of…subdues slightly. Later, Kevin Sorbo’s all like, “I guess you told it we respected it, so now we’re safe.” The end. The end?!?! Seriously? Just a little “So…..we’re….we’re cool, right?” and that’s it? They even went through all the trouble of talking about the methane gas buildup. This should have ended with an EXPLOSION.