A friend of mine—a wise lady of high repute—once said, with reference to Andy Samberg, “If you don’t like him, you’re just jealous.” To quote another such lady, “Haters gonna hate hate hate hate hate.” Comedy is a delicate and difficult thing, and no matter how good you are at it, you will never please everybody. Full disclosure regarding Andy Samberg: I am a fan. I love Brooklyn Nine-Nine, I love The Lonely Island, and I love his brilliant run on SNL. Needless to say, when I saw the trailer for his latest film, I got excited. 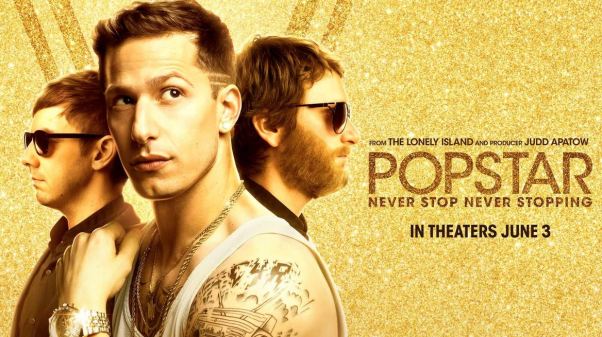 The Plot: Told in a Spinal Tap-esque mockumentary style, the movie chronicles the highs and lows of international pop sensation Connor For Real (Andy Samberg) after splitting from his hip-hop boy band and going solo. His debut album, Thriller Also, is a monumental success, but he finds his follow-up efforts less than fruitful. As countless publicity stunts backfire in increasing spectacular ways, Connor must contemplate the meanings of success, friendship, and artistic integrity.

Popstar, as a movie, is three things, which I shall present to you and analyze in list form.

If you like The Lonely Island and felt betrayed by Zoolander 2, then you will probably find Popstar: Never Stop Never Stopping pretty damn wonderful. Like I said, though, comedy is hit or miss, and everyone’s tastes are so sensitively different. Now if you’ll excuse me, I’m going to wander down the rabbit hole of Andy Samberg’s backlog, starting with the transcendent “Andy Punching People Before They Eat.”