Like the title says, I just watched the absolute worst animated movie of all time. I can’t think of anything worse in terms of writing or animation. This terrible movie involves food-related characters in a supermarket, the battle for their existence, and an inappropriate amount of sexual innuendos. Oh, you think I’m talking about the movie that is recently out in theaters, Sausage Party? No, I hear that movie is actually getting good reviews and has a 82% “fresh” rating on Rotten Tomatoes. Unfortunately, I can’t watch that film in theaters, because I live in Japan, and American animated films tend to come out here months later, if they come out at all. Instead, the film I am talking about is the 2012 abomination, Foodfight!. I had heard about Foodfight! from a reviewer on another movie review site, which stated that this film is infamous for being “the worst animated movie” ever. As a fan of animation and a generally curious person, I naturally had to see it for myself. In the end, I certainly think Foodfight! lives up to the claim of being the worst animated movie of all time.

Let’s start with the most obvious of atrocities of this film: the animation. Foodfight!‘s computer animation is bafflingly bad. I have a hard time understanding how in the world something can be animated so terribly. The characters look like plastic, to the point where I think if you took a bunch of pictures of barbie dolls and stitched them together, it would provide a more realistic animation sequence. The facial expressions… well, there aren’t really any facial expressions because all the faces look the same. If it weren’t for the overly dramatic music attempting to make some semblance of a tone, I found it hard to tell what the characters were feeling, if they felt anything at all. The character’s eyes rarely moved and looked dull and emotionless. Sometimes the animation was so bad and so robotic, it was hard to keep track of what was going on in a scene. I could have closed my eyes and had just as much of an idea of what was happening; at least then, I wouldn’t have had to look at the screen. In other parts of the film, the character’s movements were jumpy, chaotic, and repetitive, like a poorly animated NPC that says the same thing over and over again in video games. A lot of the character designs look cobbled together and nightmare inducing, even when a lot of the cast included characters that have been around for a long time.

Threshold Entertainment
This woman appears for two seconds in the film, but she will live on in your nightmares for eternity…

That brings me to the plot (haha, like this film has a plot). The idea behind Foodfight! was to make a movie about the brand mascots of various food and commercial products. The film includes cameos of Mr. Clean, Mrs. Buttersworth, the Vlasic stork, Charlie Tuna, The California Raisins, etc. It was sort of meant to do what Who Framed Roger Rabbit did with cartoon characters, or like what Wreck-it Ralph did with video games. Putting aside the obvious product placement controversy, it didn’t even do that right. The main characters were all original characters, and because of the god-awful animation, it was hard to tell when a famous brand icon  appeared on screen. The story (if you can call it that) involves our main character Dex Dogtective and his best friend Daredevil Dan, trying to stop the evil Brand X from taking over the supermarket, all the while Dex battles with his own inner demons after his girlfriend, Sunshine Goodness, disappeared. By the way, this film has a strange amount of famous celebrities to voice our characters. Dex is voiced by Charlie Sheen, his girlfriend by Hilary Duff, Dan by Wayne Brady, and the evil Lady X by Eva Longoria. Even Christopher Lloyd appears as a character in this!

Threshold Entertainment
This is Mr. Clipboard, voiced by Christopher Lloyd, and obviously just arrived from the Ministry of Silly Walks

In a way, these famous voices almost make it worse. For instance, with the 20 year age difference between Sheen and Duff, paired with the fact that Sunshine Goodness looks like a teenage girl with cat ears, makes the relationship between her and Dex extremely uncomfortable to see on screen. Dex’s friend Daredevil Dan is an equally cringe-worthy black stereotype, and Lady X often appears in over-sexualized revealing outfits, including a plaid schoolgirl outfit. Not to mention the large amount of double entendres and sometimes sexual visuals, and this film becomes largely inappropriate for its target audience (or really for any audience). That’s right, unlike Sausage Party which is rated R and for adults, Foodfight! is PG and was aimed at children. Awesome choice creators! The humor is terrible, as well, with an insane amount of food related puns, and lots and lots of fart jokes. It includes lines like “Frankly my dear, I don’t give a Spam,” and “I’m not the one who’s gonna be puppy-whipped, you cold-farted itch”. What does that even MEAN?! The scenes have poor editing and there is little consistency  with story. It feels as if the writers are pushing us through the movie and onto the next scene so the audience doesn’t have the time to comprehend how bad of a film we are watching. 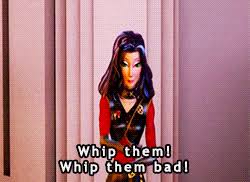 So what the hell were the creators thinking when making this story? In fact, the man behind this film, Lawrence Kasanoff, was highly optimistic and he even raised $45 million in funds for the film. Kasanoff was the founder of the studio that made the film, Threshold Entertainment. He was also the film’s producer, director, and one of its writers, despite having never before led an animation film project. But this is just the tip of the iceberg in the patchy history of Foodfight!. It was originally meant to be released in 2002, but then the hard drives containing the film’s assets were reportedly stolen. This led to some obvious setbacks. Kasanoff wasn’t deterred though and moved forward with production. His vision for the movie’s animation was to include the bend and stretch look of Looney Tunes. But later on he strangely decided to add motion capture to the animation, which really doesn’t mix well with a Looney Tunes style. His direction apparently wasn’t that great either, with animators reporting that he often told them to “make it more awesome” or “make it 30% better”. Production set-backs continued and the film kept getting delayed again and again. Eventually, investors got impatient and wanted the film to be completed as quickly and cheaply as possible. It was finally auctioned off in 2011 for $2.5 million dollars, and released the following year on DVD.

By looking at it this way, one can better understand why this film was so bad. But even if you look at the fact that this film was supposed to be released 10 years prior to its actual release, the animation and story still doesn’t hold up. For frame of reference, other computer animated movies made around 2002 included Ice Age, Finding Nemo, and Shrek. Even if the animation had been top-notch, we’d still have awkward consistency, a terrible story, bad humor, and uncomfortable character stereotypes. There’s not much more I have to say about this film, except stay away and save yourself from wanting to scratch you eyes out due to watching this terrible, terrible, piece of shit creation.