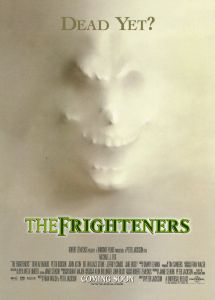 Lesson: I don’t even know. Extortion is bad?

IT’S OCTOBERWEEN. This is my third Octoberween with Rooster Illusion and I hope you guys have enjoyed it just as much. I realized two things this year – One, I like theme months. Two, I’ve only reviewed three movies from the 90’s (It, Relic and Shark Attack) out of about 130+ movies reviewed over three years, and that is criminal. So headlong into the 90’s we go – all. October. long.

I’m going to start with Peter Jackson’s The Frighteners partially because the timing was ideal and I don’t want to watch Audition right before bed. For this I am non-apologetic.

The Frighteners starts with decent-ish 90’s creature-in-the walls effects. To clarify, this is a ghost movie. It’s also a horror comedy about a grim reaper who is running rampant killing people prematurely. It’s a nice fluffy way to start Octoberween and I’m okay with that. Oh yeah – it stars Michael J. Fox.

So this movie is kind of what I would have expected a Haunted Mansion movie to look like. Extremely campy with prominently caricatures of ghosts that follow Frank around, helping him sort of solve mysteries. I say sort of because he’s not super good at it, and not a lot of people survive. In fact, I think more people might die because of his meddling. Essentially Frank (Michael J. Fox) survived a traumatic experience (car accident where his wife dies) and can now see ghosts. So naturally it becomes a Dragonheart situation and he uses the ghosts to scare up customers for exorcisms while he tries to finish his house. 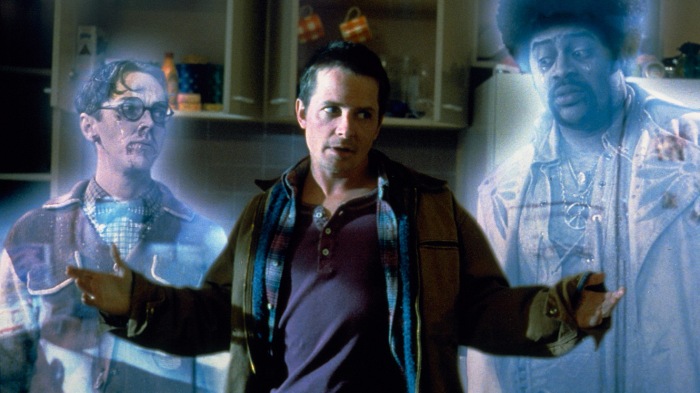 That in and of itself might have been an enjoyable little movie, but unfortunately it doesn’t stop there. His last customer ends up being marked for death by the rampant grim reaper, which is convenient because Frank is about to fall in love with that guy’s wife. What follows is about a ‘comedy’ about an hour too long and convoluted as all get out. There’s a subplot, you see, where there was a serial killer and his supposed girlfriend, who’s now locked up in a house with her crazy mom. Also there’s a weird FBI agent who’s convinced that Frank killed his wife. It doesn’t take a detective to figure out that the new dead people also have numbers on their forehead like the killer’s victims, but it does take Frank a long time.

In case you were wondering what the humor level was, there is a ‘jive’ ghost, a nerd ghost and an old west ghost. The old west ghost eyeballs a sarcophagus during a museum scene and we’re treated to the sight of him humping it vigorously, then chirping, “I like it when they lay still like that.” So there’s that. There’s also the hilarious part where Frank kidnaps a lady who’s marked and then, get this  – it’s so funny, crashes his car down a hill leaving her to crawl from the wreckage and try and get away from this madman who’s done nothing but tell her she’s going to die, only to be pushed back down and strangled by the grim reaper.

Aside from the pacing and plot being all over the place, the CGI effects are pretty bad. Not the ghosts themselves, they’re pretty good, but every scene where something pops out of a wall is pretty terribly rendered, even for 1996. One of the recurring comedic elements is the ghosts suffering some unfortunate malady (getting sucked through a fan, etc.) and those are slightly better, maybe because of the fantasy element that’s already in place.