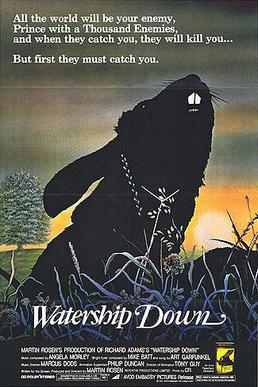 Watership Down is a 1978 British film based on a book of the same name by Richard Adams. It’s mostly famous for traumatizing children whose parents thought that a movie about cartoon rabbits was “for kids.” After watching it for the first time a few days ago I must say that I’m glad I never watched Watership Down as a kid, not because it would have terrified me, but because I don’t think I would have been able to appreciate it as much as I did while watching it as an adult. There was certainly violence, blood, and terrifying imagery, but I feel that it’s infamy prepared me for the shock, and that allowed me to really get into the characters, art, and story development – all of which were done incredibly well. Watership Down is very much like The Odessey but with rabbits, and is complete with magic, mythos, and an epic journey.

Watership Down‘s opening scene immediately grabbed my attention, with it’s tale of the Sun-God Frith and the rabbit prince El-ahrairah, of the rabbit’s mythos. The stylized drawings of Frith, the environment, and the animals all looked like someone animated cave drawings or tribal tattoos, which rather fits the mythological narrative. It also hints right away that this is probably not a film for children, with the murder of El-ahrairah’s rabbit kin by other animals. However, it also introduces us to a quote, given by Frith to El-ahrairah, that defines the nature of the characters and the path that this movie will take: “All the world will be your enemy, Prince with a Thousand Enemies, and whenever they catch you they will kill you – but first they must catch you.”

After a musical interlude with some credits, it opens to a more traditionally drawn field and introduces us to two of our main characters. There is Hazel and his weak, yet clairvoyant, brother Fiver, who has a vision of a terrible catastrophe befalling their warren. After their warning is ignored by their chief, they gather some other members from their warren and make an escape to leave and form a new warren. The group follows Fiver’s visions of a place on top of a hill “where the wind and the sound carry, and the ground’s as dry as straw in a barn”, which is the “Watership Down” of the title. Their journey is constantly filled with peril and fear, and as a viewer you constantly have that feeling that your heart is being squeezed by some foreign monster as you expect terror around every corner; which is something our small band of rabbits are no doubt feeling as well. There’s also that wonderful frustration for the first part of the film where Fiver’s visions are being doubted, but you know, as a viewer, that he is not crazy to have pulled them out of their warren to go on this perilous journey. The ability to tug you in and feel what the characters are feeling is an excellent feat for any film, and this one does it well. The character development is also really interesting. The first part of the story seems to be mostly about Fiver and Hazel, especially focusing on Fiver’s abilities and the trust (or at times lack thereof) by his brother. It then smoothly transitions to more of a story about Hazel and Bigwig, a strong, leader-like rabbit who has followed the group on their journey. It’s really interesting to see these two together, since it almost seems as if Bigwig is the one in charge. But, if we go by what Frith tells rabbits to be, “cunning, and full of tricks”, we know that Hazel is the one who is destined to be chief in the end. In fact, the main antagonist rabbit, Woundwort, even believes that Bigwig is the chief of their group, until Bigwig reveals to him in the final conflict that “his chief” (meaning Hazel) has told him to defend the warren. This is the first time that it is outright stated that Hazel is the leader and it is “revealed” with great timing, and at a very climactic moment. 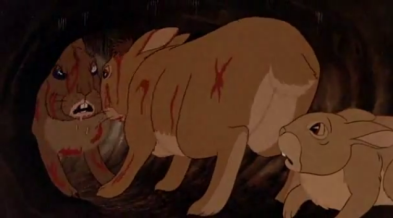 Nepenthe Productions
Bigwig: My chief has told me to defend this run.
Woundwort: Your… chief?!

The final point that I truly loved about this film was its art. I adore older, traditionally hand-drawn animation. I love being able to see the brush and pencil strokes in movement, as if the film is being painted in front of your eyes. This movie has that effect, and even thought the artwork is old and outdated, it is beautifully executed. The painted background drips with depth and atmosphere. The movements of the rabbits is very natural and realistic to how you would expect a wild rabbit to move. It is also not afraid to get into the symbolic or surreal depiction of events, both for the good and the bad. This way the terrifying imagery is all the more visceral, and the dream-like moments are all the more packed with emotion. My favorite scene is probably when Fiver is looking for the injured Hazel after he gets shot. The song, “Bright Eyes” by Art Garfunkel plays while we are treated to some music-video-esque scenes of Fiver trying to look for his brother. It evokes the feeling that Fiver is using his psychic abilities to try to find him and also helps symbolize their relationship. It is a very beautiful scene.

Nepenthe Productions
A short piece from the “Bright Eyes” scene where Fiver and Hazel are trying to find each other as the Black Rabbit of death hops between them.

Due to Watership Down being known as a tough-to-watch kind of movie that may make you want to look away at a few instances, I thought I wouldn’t really like this film. Or at least, I didn’t think I’d enjoy the act of watching it. But it’s exciting journey and gorgeous artwork definitely makes it a film I envision myself watching many times in the future.