Thank the Lord… or, I guess whatever pagan deity is in charge of Halloween. Regardless, the month-long celebration of all things gruesome, horrific, and ghoulish, colloquially known as Octoberween and more commonly known as not a real thing, is finally upon us. Last year, as I’m sure at least one of you will recall, I celebrated the occasion in honor of one of horror cinema’s greatest figures, Vincent Price. Although I do have over a hundred left to choose from, I shall not spend this year’s Octoberween in the same way. That said, it wouldn’t feel quite right to leave him out entirely so… yeah, one more.

The Plot: Crime novelist Cornelia van Gorder (Agnes Moorehead) takes up residence in a remote country mansion. Unbeknownst to her at first is the fact that the house served as the site for several gruesome murders one year ago exactly, committed by a faceless, clawed killer known only as The Bat, and he was never captured. Enter a varied cast of secondaries, Vincent Price, and a million dollars in stolen bearer bonds, and, yeah, people start dying again. How about that?

1959 was kind of a big year for Vinny P. He already had The Fly and House of Wax under his belt, but had not yet firmly established himself as an icon of the horror genre. That year saw the release of The Bat, which clearly demonstrated his unsure status. People were still not quite sure of what to do with him, what roles to stick him in, how to use him. He would have been in danger of fading into the background with other background stars of the time, whose names are now lost and forgotten (although probably not on IMDb), except that even now he has a naturally enticing weirdness and an unshakable charisma. And that voice. Love it. Fortunately for Price, 1959 also saw the releases of Return of the Fly (you know you’ve made it when you get a horror sequel), The Tingler (still regarded as kind of important in horror history), and House on Haunted Hill. That trifecta, especially House on Haunted Hill, launched Price’s career in the horror industry, got him working regularly with director Roger Corman, and started him in on the path to become the actor we all know and love today. 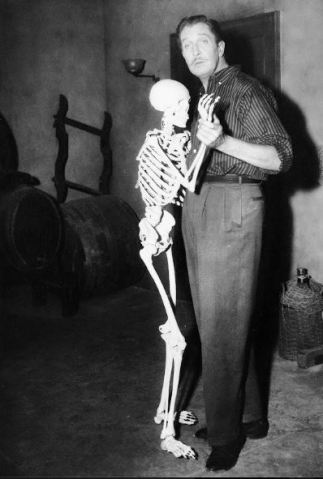 But what about The Bat? Caught partway between an Agatha Christie-style in-house murder mystery, a low-rent film noir, and some kind of early slasher movie, it remains a somewhat perplexing film. I certainly enjoyed watching it, although its quality is not quite up to par that year’s other releases and Vincent Price is woefully misused. Agnes Moorehead was great, though. You could tell that the four-time Academy Award nominee just needed her paycheck. She was so nonchalant about the whole thing. The first time the Bat shows up she reassure her staff by locking the door and calmly saying, “We’re fine, you guys. He’s out there. We’re in here. We’ll call the cops. What’s the worst that could happen?”

And with that I have run out of things to say… ah, screw it. Double feature!

The Plot: After three or four of the top surgeons in England die gruesome, creative, and definitely connected deaths, each modeled on one of the Biblical Plagues of Egypt, the police slowly begin to suspect foul play. The culprit? Probably the presumed-dead, hideously deformed organist/theologian Dr. Phibes (Vincent Price), whose wife died tragically when a team of said surgeons failed to cure her ailments.

You know, I’m not 100% sure about this, because, you know, Godzilla vs. Gigan sows seeds of doubt, but The Abominable Dr. Phibes might just be the most early-1970s movie I’ve ever seen. It’s possible. It supposedly takes place in the late 1920s, and most of the set and costume design supports this, but some of the locales and fashions are painfully late-‘60s. It’s not only astounding, but frankly kind of distracting. The questionable art direction of Dr. Phibes overpowers the vague plot and horror, but, of course, cannot conquer Vincent Price. Many consider Phibes one of Price’s seminal roles, which always confused me a bit, since he doesn’t speak at all through most of the film. Robbing Vincent Price of his voice is sort of like making a movie in which Michael Fassbender remains masked throughout, but Price overcomes the silencing and heavy makeup to deliver a haunting, ghostly performance.

That’s what really makes this a cool movie. Price is best known for his voice, charisma, and what some would call overblown and hammy performances. In this case, the movie is about as overblown and hammy as they come, but to counterbalance that, Price delivers a somewhat, or at least comparatively restrained and subdued performance. Anyone interested in his acting style should definitely check out The Abominable Dr. Phibes. Anyone interested in watching Vincent Price commit increasingly outlandish murders with a terrible vengeance should watch Much Ado About Murder, a perfect film in every respect.

Anyone interested in getting in the Halloween spirit should probably do what I did last year and just begin working through Vincent Price’s filmography. It is a consistently rewarding endeavor.