Let me tell you something. If you spend enough of your life writing online articles about Vincent Price movies, then sooner or later you’re going to reach an important impasse: you’re going to have to ask yourself, after four or so articles, how it is, exactly, that you’ve never done a double feature. Well, friends, I recently reached that impasse. I recently asked that question of myself. I recently came to the following answer. 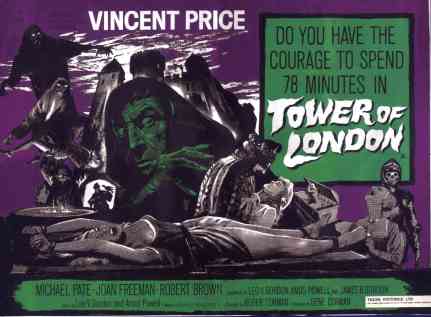 Tigon Picture Ltd.
78 minutes? Have you ever seen a movie use its runtime as an advertising point before?

The Plot: Based loosely on Shakespeare’s history and even more loosely on actual history, the film follows Richard, Duke of Gloucester, later Richard III (Vincent Price), on his murderous ascent to the throne. In case English regal history just ain’t your cup of tea, Richard was born a hunchback and scorned by his family and social peers alike, despite his nobility. Perhaps as a form of compensation, he decided it’d be somewhat validating to become king of England, although he was pretty far down the line. How do you jump ahead of the line? You murder about ten people: men, women, and children. Duh. And then you recede into madness as you’re continually haunted by the ghosts of slaughtered innocents. Again, duh.

I’m terribly sorry to have to keep bringing up Much Ado About Murder, but it’s perhaps even more relevant than before. While Tower of London is not adapted from Shakespeare’s play, Vinnie P did get to deliver some of Richard’s best lines in Much Ado the following decade. Patience pays off, especially if you’ve spent your entire career dying to play some of the Bard’s work, but facing typecasting tendencies instead. Now I wonder if playing Richard in this film was close enough to playing the Shakespearean villain to be satisfying, or close enough to be a painful tease. The world may never know. Regardless, Price approaches this role as he does every other: with finesse and conviction.

This particular incarnation of Richard suits Price especially well, incorporating characteristics from both the historical and Shakespearean Richards, blending it with some very obvious Macbeth qualities, and I detected as well a little Edgar Allan Poe a la The Telltale Heart. Considering Price’s own undying and overwhelming love for Poe and a similar predilection in Tower’s director Roger Corman (see Masque of the Red Death), I don’t think that assumed influence is too far afield. Blending the determination and villainy of Richard with the paranoia, guilt, and fear of Macbeth and the narrator of The Telltale Heart provides us with a quintessentially complex character for Vincent Price, which he only convolutes further in his multi-dimensional performance. I love this guy. 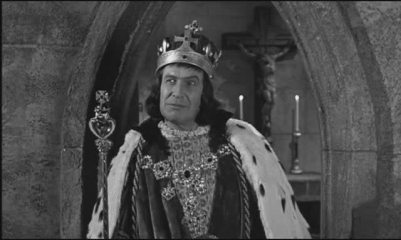 Since I’m cramming two movies into this article, I’ll not go on much further about Tower of London, except with one more brief paragraph. Let us suppose, hypothetically, that you’re an advertising man in Hollywood in the early ‘60s. You’re just starting out, and, being low on the food chain, you get handed a lot of B horror movies. Not a lot of room for creativity or opportunities to prove your worth. Suddenly you get this movie about a deformed noble who ascends to the throne of England through one method and one method only: murder. Great, you think, another crappy movie. I’m never going to get a career-making opportunity. I just need to do something great, some ultimate achievement… and then it suddenly hits you. Crowning achievement. You guys, the tagline for this movie is, “Murder was his crowning achievement.” That works on so many levels. I don’t know who came up with that, but I sure hope he was set for life and never had to work again afterwards, because a tagline like that is truly a gift to humanity. At the very least, he deserved a hearty pat on the back. 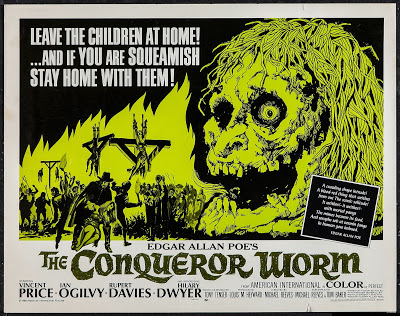 Tigon Pictures Ltd.
Also, how cool is this poster?

The Plot: Very loosely inspired by Poe’s poem “The Conqueror Worm,” this film focuses on the evils and injustices of the witch-hunting craze that swept England along with its brutal Civil War of the 1640s. Was there historically a witch-hunting craze in 1640s England? I don’t know, and frankly, I don’t care to know. I’ll take their word for it. Anyway, the film focuses on a soldier in Cromwell’s army (Ian Oglivy), his wife (Hilary Dwyer), and her father (Rupert Davies) as they attempt to finagle their way out of the ensnaring, vicious, and entirely unfounded accusations of Matthew Hopkins (Vincent Price), England’s Witchfinder General.

Despite being the titular character and the primary antagonistic force, Vincent Price isn’t actually in this movie all that much. The filmmakers instead devote equal time to all the characters. Since he’s the only remotely famous person in the movie, you have to respect their integrity in not getting star-struck or exploiting his image at the cost of the narrative.

What do I mean by, “at the cost of the narrative”? Surely, it’s impossible to harm whatever story a movie like this is capable of producing, right? Well, much to my great surprise, The Conqueror Worm boasts a very compelling story with engaging conflicts and psychologically deep characters. Even Hopkins and his sadistic assistant Stearne (Robert Russell), are more than meets the eye. I’ve seen, at this point, a lot of these movies, so take it from me that the quality of this screenplay is abnormal. And, on top of that, though not quite a horror movie, the blunt fashion with which it depicts its violent executions and tortures is notably disturbing. This is, at times, an upsetting film. 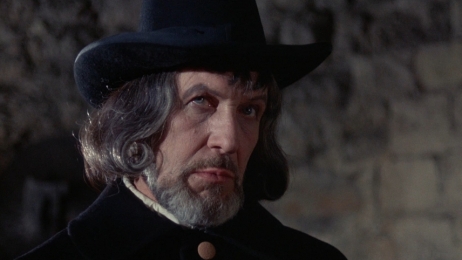 Tigon Pictures Ltd.
Although not as upsetting as this wig.

Even more impressive is the effort from director Michael Reeves (who also co-wrote the screenplay). This is, against all odds, an incredibly well directed movie. His shot composition is lovely, the framing is sublime (even in a literary sense), he entices great performances out of his actors, and knows when to show violence and when not to for ultimate effect. This was only his fourth attempt, but ended up being his last. Why? Because he died the following year at the age of twenty-five. How did he die? Alcohol and barbiturates. What a stupid waste of talent. This film is so promising, especially considering his age. Based on this, he easily could have gone on to develop into something like a John Carpenter. He certainly could have outdone Roger Corman. What a bummer.

Sorry this got depressing and not-about-Vincent-Price. I probably should have posted this review first and ended on the light note of Tower of London. Oh well. Too late to do anything about it now.

One thought on “Second Breakfast Octoberween Double Feature: The Price Is Right!”