Pet Sematary | It | Children of the Corn | The Mist

For the next installment of Shame September, I get to watch Stephen King’s It. I consider myself fortunate that I never sat through It as a young ‘un, that I have the privilege to sit down and enjoy it in my leisure at the ripe old age of 25 (this movie and I are the same age!), cat at my side, in broad daylight. As far as I understand it, this movie is the sole reason my peers are afraid of clowns. It is also a horrifying three hours long, because it was originally a two part series.

Let’s get down to brass tacks – I’m beginning to realize that I may not be so on board the Stephen King train. This is almost definitely a nostalgia issue, I would say. It’s hard for me to digest the pseudo-camp of 90’s King cinema. It would seem that these are all movies that just don’t translate as well as I’d like them to – but that doesn’t mean I can’t enjoy them.

It has a healthy friendship theme going on, kind of like the Sandlot of horror movies. The self-called ‘Loser Club’ is formed and then systematically targeted by ‘It’, in a town that experiences this type of child-culling every 30 years or so. It’s sort of woefully under-explained and random, which I think damped some of the suspense. There wasn’t really a super discernible pattern, and their choices are limited to ‘run away’ or ‘suck at running away’. 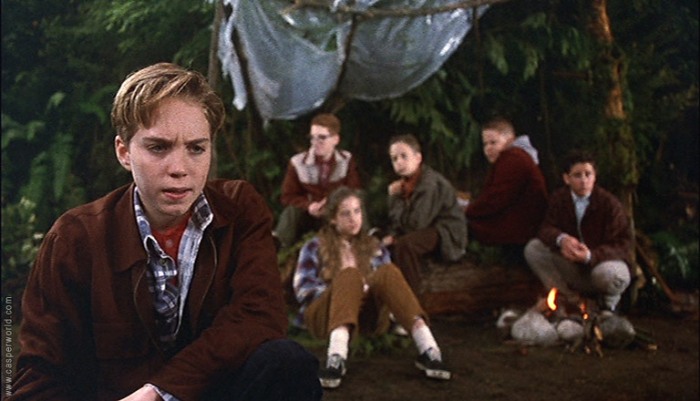 As a movie, it’s paced okay, with the first ‘half’ being much more effective than the second. The flashbacks are almost all more enjoyable than present-day, and I think that some of the scariest moments come from the vivid depictions of domestic violence enacted on the only female in the Losers Club. Actually, I didn’t find It super scary at all. Maybe some suspenseful moments, but they always felt undercut by the feel-good coming of age stories. I know that this originally aired on tv, so it probably could have been scarier but was somewhat censored, but still. There is reportedly a remake in the works, so I’ll be interested to see that iteration.

For all of the attention Pennywise gets, I was kind of surprised at how little airtime he gets. I love me some Tim Curry, and he does a great job, but he was definitely underutilized.

So for me, It could have been shorter and scarier, but it wasn’t a snoozefest to sit through. There are some really really cool practical special effects utilized, and the kids are all really fantastic little actors in their own rights.

Also, don’t get me wrong, the ‘spider’ is creepy, but the ending was so so so so bad. “Oh hey let’s just punch it to death” was so underwhelming. UGH.