Lesson: If there’s something weird in your neighborhood, who’re you gonna call? BARTENDER! 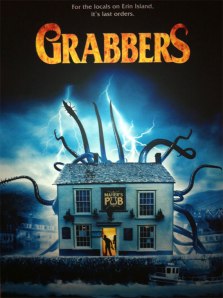 It isn’t often that I watch a movie that’s intended to be funny (for this column). Sharknado and Sharktopus and Piranahaconda aside – because those are movies that are intended to be funny by having you believe that the filmmakers are inept, which they are not. Grabbers, on the other hand, is billed like Cabin in the Woods. It’s supposed to be humorous. James (Bossman) actually recommended this movie to me.  Let’s see how it is!

“Residents of an Irish island must get very drunk to survive attacks by alien monsters who can’t tolerate a high blood alcohol level in their victims.” Sounds like a good time, right? (I should probably state that I don’t endorse getting dangerously drunk. Drink responsibly, readers.)

Grabbers starts pretty strong with a fishing vessel gone to rescue what they think is a distressed ship but is actually aliens. Predictably, this does not end well. The following morning, and we’re introduced to a plucky young Police officer and her new, drunken curmudgeon of a boss, as well as what’s, quite frankly, a lovely Irish island. Simultaneously, a man discovers several bodies washed up on the shore. Specifically, whale bodies. Also, surprise! George, of Being Human (BBC) and the Hound of Baskervilles episode of Sherlock is in this movie!

Forward Films
I can just see the TV pilot.

Speaking of things that can’t end well, one of the lobster fisherman has managed to catch one of the aliens, and has brought it home to investigate. Sounds smart. Another one finds and egg. Mom seems none too happy about it, that’s for sure.

Actually, what ensues is equal parts horror and hilarity. You know that scene in Men in Black where the alien wears Edgar like a suit? It’s kinda like that. On a side note, I can’t remember important things, but I can remember the name of the farmer from a movie that I saw in the early 2000’s. Go brain, go!  Now, if you read my blog regularly, you know that I LOVE a little common sense in my movies. So naturally I love that characters in this movie grab axes when they sense danger, and wear helmets when approaching sea monsters. I also like it when they win. Sea-Monster-for-a-pet man manages to beat the snot out of the thing before it eats him (it’s only a baby) and gets it to a marine biologist! SCIENCE HAPPENS!

Because of science, logical conclusions are made, investigations ensue, and the police very quickly figure out what’s going on. Mind you, if you’re wondering where everyone else is, we are assured early on that most of the island is away on holiday, meaning that it’s a small cast of characters is left to contend with the beast. And I do mean beast. They locate Dad, and Dad is HUGE. I have to give them props for showing restraint with the CGI, too. There’s some degree of animatronics, but the transitions are subtle.

Let’s talk about more things that I liked!

Character development! Although I so neatly defined them earlier, I was pleasantly surprised that no characters were clear tropes/satires of tired characters, and that they were allowed to be people and stuff.

The monsters! For once, it seemed like the creature designer actually put some thought into how the alien would develop, and look, and act, and all that fun stuff. It’s really fun to watch an alien like that, with distinct influences and behavioral characteristics. 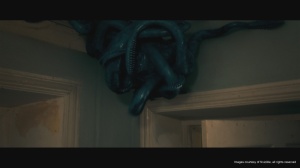 Forward Films
Look at this corner full of nope.

Actually, my main complaint with this movie is that they use fade outs a ton, and they happen at odd moments that don’t at all feel natural.

So, if you liked Slither, you will love Grabbers. It’s a nifty little film that I wouldn’t hesitate to watch again.