I have to say, you guys are kind. Last week’s review read like the musings of a rambling insomniac. I’ll try and be a little more cohesive in the future.

So! What is a Golem, you might be wondering to yourself? Well, it’s typically a stone/clay giant that can be controlled by a scroll or an incantation, possibly both. It’s rooted in Judaic mythology. They are largely considered to be loyal servants of their masters, whether those intentions be good or bad. Let’s see how Sleepy Hollow chooses to portray them. 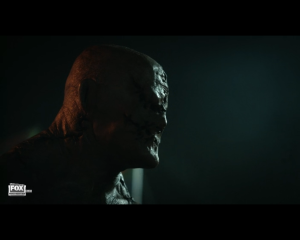 Our episode this week begins with Ichabod Crane chopping wood, followed by an inane observation by Abbie. However, some musings about Ichabod’s son come to light, and this is important, because seriously, this is Mystery Numero Uno in my book.

Oh hey, Walter is back! (Parrish, I guess. Sin Eater, whatever. Walter.) It takes about ten seconds for Ichabod to convince the Sin Eater to attempt to place him into the purgatory land that Katrina is in. It always baffles me when characters claim to have never done something before, but are then immediately qualified to do the thing. In either case, Ichabod is capable of entering Purgatory where is distracted by babies and weird little dolls. Katrina is there, of course, and we discover that their son’s name is Jeremy, and that Katrina’s coven turned on her because of how she saved Ichabod. Incidentally, they did condemn her to purgatory. A demon finds them talking, and Ichabod is thrust back into the modern world. We also learn that Jeremy was entrusted into custody by Abbie’s ancestors, so that’s interesting. 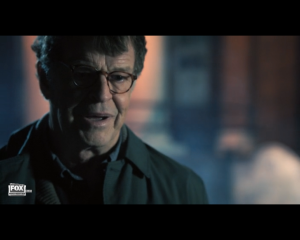 As usual, John Noble plays an eccentric old man, but, hey, if it ain’t broke, don’t fix it! Some golem(s?) seem to have leaked into our world from purgatory. I have never had a complaint about the creature design/SFX work in this show, and the Golems are no exception. They are great looking, but I also like how all the demons look like they belong to the same world.

I’m super glad that everyone keeps really detailed records of all this business. We’re soon able to find out almost exactly what happened to Jeremy as a child, including his inherited witch-start-fires problem, and then to the orphanage. That means that one of the best mystery potentials is, yet again, ruined. Come on, you guys! That could have been crazy suspenseful! I mean, I guess we get some like, Tom Riddle stuff with the orphanage, but I’m willing to bet that we don’t get a lot in the way of satisfaction.

The Golem strikes! Killing the archivist who refused Ichabod help in finding his son. Guess what? She’s a witch. Of course. Of Katrina’s coven!

Best line in the whole show thus far: “So if I went on a date with a guy and we had awful intercourse, we’d be going on a second date?” (in reference to how words have changed since Ichabod’s time.)

Can we talk, just for a second, about how utterly terrifying the Jeremy’s doll is? Like, I know Katrina made it for him, and it’s sentimental, and all that jazz, but, holy God. It’s a skinny Oogie Boogie.

So here we go, discovering more about Jeremy, notably that it’s his Golem, birthed of his pain and suffering in the orphanage. This is all conveniently noticed by Henry (the Sin Eater) because this show doesn’t care about plots and stuff. If something needs to happen, it just DOES.

I’m not sure what to make of the interaction of the Captain and his daughter Macy. Did we really need a shot of Macy pining over people not-in-wheelchairs? I’m all for having a strong wheelchair’d character in television, but maybe it could not be about how much she ‘yearns to walk’. Then we get to see a demon harass the Captain, so that’s…something. It can apparently be jostled from person to person, which is also interesting.

Something truly dramatic is happening now. Jeremy’s Golem is targeting Katrina’s coven because of their betrayal, but Ichabod posits that the coven can bring Katrina back, so naturally, they go to rescue them. Even more normally, they work at a carnival.  Even better, I’m still in love with their character design. They are like the Greek fates, but they have freaky teeth and weird faces. I dig it.

We learn that Jeremy was also killed by the coven, and as such they have accepted that they will die by the Golem’s hand. Ichabod lets this happen, bitter about learning how his son died. He is able to stop the Golem because he was related to Jeremy, and thus ends the most anticlimactic episode to date. Except in the last minute, Moloch shows up and kidnaps Ichabod for a little chat.

Is that really all we get to know about Jeremy? That he’s dead, with no offspring? All he gets is a 1.5 episode arch? LAME.

So, next week (I believe) we get a 2-hour finale to the first season, get pumped. Apparently the internet loves Sleepy Hollow so much that we are granted this Christmas miracle.