Baddie: All men, regardless. Apparently.

Ahh, the marathon of outback horror continues. (For those newcomers to the column, all of Octoberween, SciFridays will be reviewing Australian horror films to honor the delightful movies from that delightful continent).

The film opens with some very annoying papyrus subtitles and information. True story, blah blah, Great Barrier Reef, blah blah, islands, blah blah. The moral of the story is that this is an episode of Lost waiting to happen. A young couple has decided to vacation, or at least visit, this particular small island. And really, who wouldn’t? Uninhabited isles are pretty nifty. Needless to say, the dialogue is somewhat forced and the captain is understandably cautious. It is rarely a good idea to hang out outside civilization for 10 straight days in Australia, the land of ‘everything wants to kill you’. It is also the land of ‘ideal for panoramas’ which we get treated to a lot. I’m not complaining, this place is gorgeous. The long shots emphasize just how far away they are, just how isolated.

Now, I tend to watch these movies critically, because, y’know, it’s my job, so I go out of my way to notice the strategies to introduce suspense. In this case, the dialogue isn’t particularly helpful. “I’m not afraid of anything,” quips the boy as the girl starts to inform him of what’s available to kill them in the water. Then there’s some sticky salty gross post-ocean making out (never comfortable) and then they wake up to some footprints.

It’s more unusual than you’d think, but the chemistry between the two leads, a couple, is negligible. This is not assisted by the mediocre dialogue.

The first night sets in, and the impossible bone chime that Harry has inexplicably created makes a racket. A shadow flits outside the tent. Spooky, but ultimately uneventful. An apparent panty raid on their camp prompts a search through the dense brush in the center of the island, followed by some fishing and a brush with deadly fish. Because, y’know, Australia. Spooky noises followed by a random shack that they didn’t locate in their previous searches. A shack full of spooky noises (Told you this was an episode of Lost). 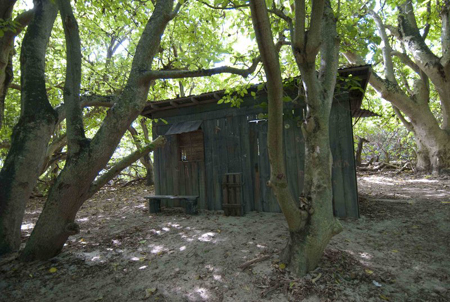 At this point in the movie, I am reasonably assured that the baddie is human, or supernaturally human (ghost, etc). This is promoted by the footprints, bones and then confirmed by the shack and grave. Then they find their camera and discover someone’s filmed them while they were sleeping. That’s actually pretty creepy, and understandably, Beth wants to go home. But, Harry is a jerk, and convinces her to stay. They have some fun pretending to stalk the supposed ‘child pranksters’ they think are behind the whole thing.

The second night brings more spooky noises, escalating to a chant of some sort now. Also a guest book in the shack? Why not read that before? It looks full of some important information.

The soundtrack to the film is minimal, and it’s sometimes hard to tell what they’re hearing and what’s in the background. A didgeridoo plays in the background as they discover butchered sea slugs (creepier than you’d think) in the morning. At this point, they are left to confront the foreign shark hunters who are new to the island. It goes about as well as you’d expect.

At this point, subplot ensues and I stop caring. The other humans on the island now just lead the characters into a false sense of security, convinced it’s the Russian shark thugs that have been messing with them, despite the timeline discrepancies. Harry swims to the boat to look for their supposed stolen phone and finds a radio, terrifying knives and a garland of decapitated dolls. Yeaaaah. Incidentally, one of the thugs is on the boat and knocks him for a loop. Harry drifts in and out of consciousness and awakens with his lady, bound and somewhat kidnapped. Even their muffled dialogue is stupid.

The thugs are drawn away, guns happen, and then general distress. The thugs rowboat back to their boat, and the couple is free to escape.

About an hour into a movie, the ghost story is finally revealed. Coral, a sea slug farmer, stepped on a stone fish, and was raped while she was dying. Now she’s a ghost who takes revenge on men who visit the island. Naturally, Harry doesn’t buy it, but Beth starts tending to the grave and feeling scared/sympathetic. Tensions are high in this new fledged couple. Fish is cooked passive aggressively.

Then the movie just kind of ends. Okay, yes. Harry dies, as we knew he would. Beth steps on a stonefish, and then it’s kind of convoluted. The implication is that she remains to haunt the island with Coral. Frankly, the whole thing is kinda ‘meh’. I don’t even have exciting screenshots to put in this review.