Well, the internet is FREAKING out about Sleepy Hollow. So much so that Fox has renewed it for a second season already! Then again…The Following is getting a second season too. I remain unsold.

This week begins with a flashback – but more importantly it begins with a sonnet. Ichabod, being from the past, is much better at being in touch with his feelings, doncha know. Incidentally, this turns into another moment of Ichabod not knowing modern things. It’s still kind of endearing.

We know from last week that Jenny has escaped from the psych ward, but as Abbie is quick to point out, there wasn’t really a good reason for that to happen. This is an apt time to talk about something else – namely, why is Ichabod Crane allowed everywhere, as though he were a police officer? Granted, I think that people are starting to believe his time traveling tales, and he has been helpful to a point, but other than Abbie vouching for him, he has no official capacity.

The German is back, and this time he’s a piano teacher who has the Devil on speed dial. Fantastische.

Have I mentioned lately how much I love Abbie (unfortunately, she needs to attend Kevin Bacon’s ‘How to shoot at car TIRES’ class as well)? I like Jenny too. AND I like their relationship as siblings! Character Development!!!! WHOA. That being said, Ichabod constantly babysitting? That might get annoying. 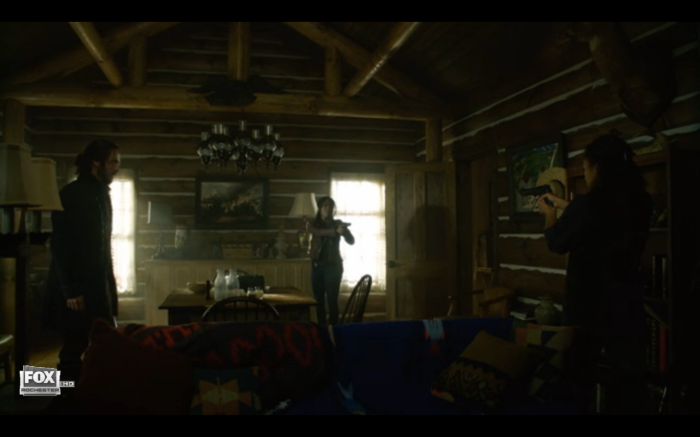 This week, we are treated to the addition of an item menagerie instead of just the monster-of-the-week. Which I think is fine. Variety is the spice of life, right? Sometimes, though, I’m not sure how I feel about well-known historical events getting a supernatural spin to fit the plot. In this case, Ichabod Crane is now the mastermind behind the Boston Tea Party. That guy has his hands in so many plots.

Hang on. Why is the Key of Solomon in German? I would assume, y’know, Arabic. Moloch seems like a bad mammajamma regardless though. I went ahead and Wiki’d that for yah. Basically, he’s an ancient king reviled in the Bible as a false idol, and something about child sacrifices. Yippee. (This is actually re-stated in the last minute of the episode).

Fact of the day – horned white demon is Moloch, and not the Devil. So. Huh. Things to ponder for next week.