Taste is in the eye of the beholder.

Last week I reviewed a film called “The Lost Tribe”. If you’ll recall, it’s a remake of this film – produced less than two years after.

Avatar Media
For you non-Deutsch speakers – “A new dimension in terror.”
Ed note: After Dusk They Come on Amazon Instant Video

This is the German movie poster. I haven’t taken German in a few years, but I know that it is confusingly called “The Tribe” and captioned “The Forgotten Ones”. In either case, let’s dive in, shall we?

If you haven’t already, I suggest reading my post from last week. Not just because it’s one of my better reviews, but because I’m going to do a lot of compare/contrast stuff.

First, can we talk about crazy Jewel Staite on the cover of this thing, wielding a goshdarn machete?

Actually, let’s talk Jewel Staite. For those who don’t know my love affair with here, it started with “Firefly”. Well, it kinda ended there too. She’s a weird goth chick on “Dead Like Me” and then she makes a guest appearance on “Supernatural”. But really, she’ll always be Kaylee, the spunky mechanic. I mentioned last week that I would probably only consent to watching this movie because of her.

As first impressions go, “The Forgotten Ones” has a terrible one.

The sailboat sequence is stale and contrived. The dialogue is weak, and the character relationships are shoved forcefully down the audience’s throat. In this sense, “Forgotten Ones” is weaker. Having crashed on the island, Peter proposes to Liz (Jewel Staite) and it’s touching. Supposedly. The audience is still recuperating from Peter being a MASSIVE TOOL not even five minutes prior. The chemistry between actors, by the by, is negligible.

Avatar Media
“Why am I marrying this guy again?”

Let’s talk about the differences, and what I think of them. I know you’re all dying to know. 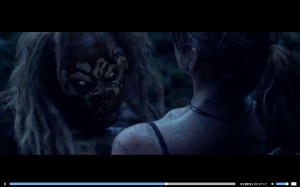 Avatar Media
This is pretty scary, I think.

Having now seen both of the films, my opinion is this. Why the remake? Is “Forgotten Ones” a great movie? God, no. Is it a delightful b-quality horror film? Yes! Absolutely! It feels like the director made “The Forgotten Ones” and grabbed a test group of people who suggested things like –

“HEY. What about a government conspiracy!? OH! Or the Church. The Church hates change.”

“The love story sucks. She should find the engagement ring when she finds his dying corpse in the creature den.”

“I didn’t know the creatures were blind. Make it clearer. Y’know, like in Predator. I like to know what’s going on at all times.”

So, this being said, here’s the conclusion.

Awful start. Better creatures. Simpler plot. Much less complicated, and therefore a better film. I don’t often get to directly compare films like this though, so for that I’m grateful. Additionally, the creatures in “The Forgotten Ones” display some more human qualities that make the ‘missing link’ connection a bit more believable. Even if it doesn’t even come up in this version. Another thing they threw in for giggles when they made “The Lost Tribe”.