When asked about my most frightening TV or movie watching experience, I never fail to mention Storm of the Century, an epic TV mini-series which calls upon the most vivid of northeastern inclement weather experiences to bring the viewer firsthand into the heart of the storm. Starring Tim Daly (Wings) and Colm Feore (Trudeau, shout-out for Canadians,) the entire experience will run you approximately four and a half hours, so I would advise taking this one in in more than one sitting, if you can manage it. 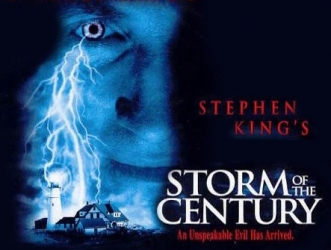 Storm of the Century on Amazon

Like the majority of King’s work, this is set in Maine, in this case an island off of the rocky, unstable shores of the east coast. It’s a small town community, driven by what appears to be primarily a fishing economy, but it becomes immediately clear that a storm is not the only thing headed into town.

I typically prefer to start with the strengths of the film, but in this case there are so many that I would rather start with what I was less impressed with. The acting cast lacks a true dominant presence, someone that the viewer is familiar with and therefore might dominate the screen. However, Feore’s performance is strong enough to make you wonder exactly why he hasn’t landed more big roles than he has, and no, I’m not counting the Chronicles of Riddick.

“Hey, but at least he gets along with children, right?”

Some viewers might argue that it clips along a little slowly, but this, like any King book, is part of the experience and is devoid of the cheap thrills and sudden, weak forced plots that drive the effort to fit modern horror movies into an hour and a half timeline. Like a Stephen King book, it is first and foremost a good story, and beyond that unduly creepy. This is my personal favorite film done by King; the reason likely being that it was written originally as a screen play, and was never intended to be released as an actual novel in the first place. This avoids some of the transitional issues that might be encountered otherwise.

The trick with this series is to watch it alone. Some horror experiences are amplified by the presence of others, but in this case you will want to be able to fully focus on what is happening, rather than be distracted by outside banter. You’ll feel the snow battering the windows, the rush of cold wind chilling your cheeks and, above all else, feel the devilish presence of Andre Linoge, as the townspeople desperately try to find a way to fight off the storm, and with it the demon, before they are all swept away into the Atlantic ocean. Even if you’re not a fright person, take the time to absorb this one. “If you have the stones for it!”