Lesson – Snakes aren’t that scary. Work on it. 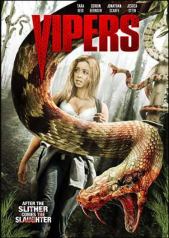 “Vipers”, on a whole, has a kind of honesty that I found endearing. The script feels more or less natural, and the dialogue is convincing. The small town/island setting is rife with conflict, although it has a tendency to lapse into ‘soap opera featuring poisonous snakes’ at times.

However, “Vipers” does not disappoint on standard horror fare. Does a minority couple like, totally die on their honeymoon? Maybe. Are there boobs? YUP. Totally obvious blonde character? Check. I didn’t check, but her character name might have been ‘Exposition’.  In the first twist of the movie, that role is not filled by Tara Reid.

In all seriousness, here’s the deal with “Vipers”. It lacks what some writers like to call ‘foresight’. It’s almost like the writers were playing no-take-backs. Once they established something, there could be no revisions. Subsequently, they wrote themselves into some corners, which they…neatly…evaded with some good old fashioned ‘horror’ logic.

The snakes, which ought to be the focal point here, are, of course, genetically modified (no one ever gets more specific than that) in order to cure cancer. OBVIOUSLY.  This makes them hungry. I wish I was joking. Typically, horror movie snakes are huge. That makes them scary. Anything larger than it should be is terrifying. These snakes are normal sized. And hungry. Like, super hungry. So hungry that they now hunt in packs and rip flesh from people in bite size chunks, like wolves. Snakes. Snakes do this. I imagine the process went something like this.

“Yeah, so…wait. Our snakes are small. Guess they’ll have to use their fangs to break humans down into smaller, snake sized pieces.”

Now, don’t worry your pretty little heads. This logic extends into dealing with the snakes.  At least they’re consistent. 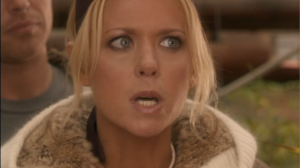 Genius Products
Couldn’t have said it better myself, Tara Reid.

As any good Christian knows, the only way to kill a snake is with poisonous gas. And there’s only two kinds – lethal to snakes and lethal to everyone.

I’m just saying…there are some options. Gas masks, for one. Guns, for another. Flame throwers. Knives. Shovels. Catch my drift? These are snakes. Squishy, flammable snakes.

Snakes that scream when they die. The noise of snakes screaming will haunt me until the day I die.

One thought on “SciFridays: “Vipers””