Like many of your reading this, the new year has made me take stock of my life. These first cold and barren months of the year set the stage for introspection and for making change. For many, this means resolving to commit to a workout routine or trying one’s hand at a new activity. I resolved to better my life by having significantly more kung fu movies in it. To readers seeking to follow me down the path of better living through punches, you’d be wise to begin your journey as I did with Five Deadly Venoms. Released in 1978 by Shaw Brothers Studios and kept in the public consciousness by means of Tarantino, The Wu Tang Clan, and a cult following, Five Deadly Venoms (alternately known as The Five Venoms) is a classic of the genre that excels by borrowing from other genres. 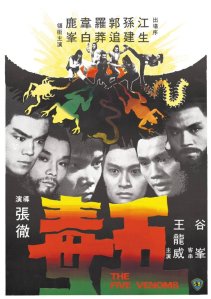 The plot: As he draws his final breaths, a kung fu master (Dick Wei) tasks his final pupil, Yang Tieh (Sheng Tiang), with tracking down his five former students. Trained apart from each former under false identities, each student is a master in a deadly form of kung fu (centipede, snake, scorpion, lizard, and toad style respectively), the students have disappeared back into the wider world and are on the hunt for a fortune belonging to their master’s former colleague. Yang Tieh must track down the fortune and the Five Deadly Venoms, but the road for both is fraught with treachery, police corruption, and deadly combat.

Equal parts mystery, crime drama, and martial arts epic, a core strength of Five Deadly Venoms is the way it keeps viewers guessing. Four of five titular venoms are introduced early in the film, and clear allegiances are made in their hunt for fortune. When the fifth appears, he’s clad in a mask and works alone. Until the final act of the film, his actions, allegiances, and motives remain purposely unclear. Up until he reveals himself in the film’s closing moments, the mystery of Scorpion’s identity anchors the film through its twists and turns. Uncertainty is an asset rather than a setback throughout Five Deadly Venoms. The five kung fu masters operate within varying degrees of moral ambiguity, though Centipede (Chang Hsiao-Tien) and Snake (Chi Tung) tip their hand toward villainy early on. Five Deadly Venoms is keenly conscious of the signals they are sending to viewers about these characters through body language and incidental actions taken by them, only to upend expectations as the film progresses. There’s a good cop/ bad cop dynamic that plays out in unexpected ways, and a scene during which one of the film’s clear bad guys is tortured by a corrupt court system can’t help but yield sympathy. A vanilla Yang Tieh hangs back relatively early on, setting the stage for the personalities of his fellow Poison Clan alumni to chafe against one another, and leaves them to deceive and do battle with one another until the dust clears.

In its maneuvering through the ranks of a police force and the court system, the film flows more like a contemporary cop drama than one might expect from a kung fu movie. The fights in this movie are not quite as wall-to-wall as one might expect, rather they are doled evenly throughout the film as the plot dictates. Five Deadly Venoms is set on telling a complete and sturdily constructed story rather than providing a loose framework for martial artistry to ensue. The film introduces that one of its characters can run the length of walls and another has skin that can crush metal, and the viewers anxiousness to see how and when these feats will be revealed to the world fuels the story. Of course, these abilities aren’t always enough to help them. On the whole, the martial arts media I’ve consumed throughout my life has tended to depict master martial artists as something bordering on superhuman, divorced from the average human’s physical and emotional frailties. Five Deadly Venoms challenges this trope, its central warriors are as liable to be adrift and without purpose in spite of their abilities as anyone else. The battle for the hidden fortune gives their life meaning even more than the promise of monetary gain. And, as they shall find out, even a kung fu master cannot always kick their way out of the clutches of a corrupt government, in spite of their best efforts.

Just because these abilities can’t always save them, doesn’t diminish how much of a delight it is to see them in action. Meng Lo, Wei Pei, Chiang Sheng, Lu Feng, Kuo Chi, and Lu Feng, members of the troupe that would fittingly be come to known as the “Venom Mob” know how to best work off each other. Fights are quick paced and fluid, defying gravity without losing coherency, particularly as more combatants are thrown into the mix. A climactic battle, showcasing each of the five styles plus Yang Tieh’s composite style, sizzles. The fights are satisfying without falling prey to indulgence or overlength. This is the film that solidified the Venom Mob as bankable Hong Kong stars, and after witnessing them in action one apiece and as a group, it’s easy to understand why.

Five Deadly Venoms sets a high bar for kung fu film craftsmanship. Nothing in the film feels at any point lazy or hastily concocted. The plot serves the action well, and vice versa. I started my kung fu movie journey with Five Deadly Venoms hoping to get an enticing snack, and ended up with a fulfilling meal. 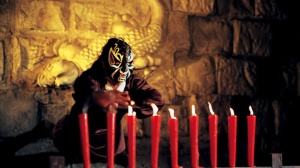