A Series of Unfortunate Events was a seminal book series in this critic’s childhood, a word which here means “integral in seeding the author’s longstanding interest in gothic literature and humor of a deadpan and pitch black variety”. The book series introduced this critic to an alluringly witty prose style and a singularly distinct world. The 2004 movie adaptation introduced this critic to the concept of being deeply disappointed with casting choices. The series’ heady mixture of farce and tragedy that made the books a runaway success, alas, did not translate into a successful film franchise as readily as its YA contemporaries, and the 2004 adaptation (perhaps mercifully) failed to yield sequels. Fortunately, Netflix manages to do with the first eight episode season of A Series of Unfortunate Events what a feature length movie could not: adapt not just the look of the books, but their language and soul as well. Overseen by author Lemony Snicket (aka Daniel Handler), and produced by Barry Sonenfeld, A Series of Unfortunate Events season 1 is a stellar adaptation and a vital season of television.

For the uninitiated, A Series of Unfortunate Events is the saga of Violet (Malina Weissman), Klaus (Louis Hynes), and Sunny (Presley Smith) Baudelaire. Orphaned after a mysterious fire burns their house down, the children are left in the care of Count Olaf (Neil Patrick Harris), a nefarious distant relation with eyes on the fortune left to the orphans by their parents. Escaping from the clutches of Count Olaf, the Baudelaire orphans are hurtled between legal guardians, but danger and a disguised Count Olaf are never far behind. As the children try to evade the clutches of Olaf and his troupe of actors/ lackeys, they slowly begin to unravel the mystery of their parents deaths and of the mysterious organization to which they belonged. 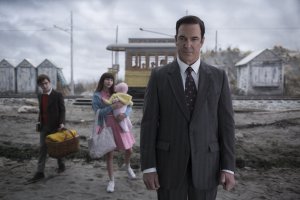 Adapting the first four books of the series, the eight episodes of ASoUE first season makes the most of the transition from page to screen in a way that precious few adaptations do. The series visualizes the ambiguously Victorian world of the book with cinematography harkening back to classic noir and silent film and a production design somewhere between the sensibilities of Wes Anderson, Guillermo del Toro, and Tim Burton*, a trait shared with its 2004 predecessor, but here bolstered by winning writing and acting. Rather than lose the narration by Snicket that was so integral to the books, the series the narration –and the author– directly into frame. Played to deadpan perfection by Patrick Warburton, Snicket takes the exposition that would be poison to other adaptations and turns them into soliloquies, often acting as an unseen presence in scenes to provide a framework to the series and usher in jumps backward and forward in time. Warburton’s Snicket provides the series with its language, injecting the comically morose voice and jokes about Thoreau that make the books and this adaptation stand out.

The soul of the series is captured by its cast. The trio of children at the shows center are impeachable, turning in emotive performances through heightened dialogue. At a blush, the closest comparison would be to the children in Moonrise Kingdom, but the comparison doesn’t ring true. Anderson’s children speak and act like adults*, the distance between the age and their language taking center stage thematically. The children in ASoEU speak like intelligent, impossibly polite children, but still process emotions, and the daunting and hard world around them, in a recognizable way. These are smart children. Where Katniss has survivalist skill, and Harry Potter has a combination of charm, luck, and Hermione, the Baudelaires have intelligence and curiousity to guide them during their darkest moments. There’s not a lot in the way of action, and what action there is stems from investigation and research. Libraries abound. More than that, their strength lies in each other, a factor aided by how believably these three act as siblings. There’s humor in seeing children discuss Samuel Beckett and speak in crisp, eloquent voices (particularly in early episodes, as the viewer is just entering this world), but by episode 8 the literary allusions and ten-dollar words become second nature and aid in constructing characters instead of distracting from them.

Where the children find success in restrained performances, Neil Patrick Harris as Count Olaf relishes in wild villainy. The key to NPH’s success is striking a balance between Olaf’s wacky antics and being genuinely menacing. Olaf is not particularly smart, but he’s incredibly, dangerously wily. Whether he’s gnawing scenery on stage, doing his best worst Sean Connery impression as Captain Sham, or slinking through the office of a blustery mill owner in drag, Harris never loses sight of Olaf’s essential petty cruelty amidst his disguises and outward silliness. Serving as an executive producer, it’s clear that ASoEU is a passion project for Harris, and he obviously relishes in the many personas offered to him by the role. Bouncing his various disguises off of season 1’s spectacular array of charcter actors (Joan Cusack! Aasif Mandvi! Alfre Woodward! Don Johson! Catherine O’Hara!) provides each episode a differnent tone, but even if he’s butting heads with a herpetologist or rekindling a destructive romance, there’s a throughline evil to the performance.

The trouble is that NPH’s performance(s) steal center stage a little too often. In season 1’s weaker moments, the children’s story takes a backseat to Olaf’s ruses. These moments are spread thin throughout the series, but they can derail the flow of an episode. Flow is the show’s main trouble. Repitition was perhaps the book series’ greatest flaw, and this becomes all the more noticeable (and frustrating) when watching episodes back to back and seeing adults failing to recognize Olaf to the Baudelaire’s exasperation over and over. The show delights in language, to the point where episodes occasionally get too talky. The third episode takes on the air of a parlor murder mystery, which makes sense for a pastiche of literary genres, but makes for slow viewing. 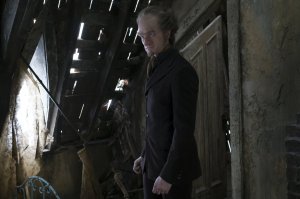 That season 1 is a blessing and a curse. The show doesn’t suffer from the glut that plagues the Marvel Netflix shows, and bingeing the show doesn’t quite feel like a daunting feat. The curse is that, with its emotionally fraught ending, it is torture waiting for season 2 to start. A Series of Unfortunate Events is a hilariously grim and grimly hilarious show that offers a lot to newcomers and book fans alike. It’s a show that champions being smart and curious and brave even when there aren’t any happy endings in sight, and maybe that’s what we need right now.

*Bo Welch, one of three directors for the first season, was the production designer for Edward Scissorhands, which the series most closely resembles.

**Aside from Sunny, whose baby noises are provided by veteran voice actor Tara Strong