Despite this column being called “Saturday Morning Cartoons” I have written very little about the cartoons I actually used watch on Saturday mornings as a kid. The reason for this is in part wanting to promote recently made films or shows, and in part feeling that the nostalgia of older shows may overshadow their likely flaws in my mind. However, it feels blasphemous that I have not paid attention to the shows that made me love cartoons in the first place. So, keeping in mind the affections I have for such nostalgic shows and that effect on how critical (or not) I may be on them, from now on I’ll attempt to take more time to reflect on the shows that were my own Saturday morning cartoons.

The first of my Saturday morning cartoons that I will be covering this week, is one that I re-watched recently, and one that I, in fact, tend to re-watch a lot, known as Xiaolin Showdown. Not a lot of people seem to talk about this show, so it is possible that it is something that is nostalgic to only me. But it is also possible that it was forgotten quickly due to the popular show, Avatar: The Last Airbender coming out soon after it. Thematically, the two series have a lot of similarities. They both utilize Asian cultures, martial arts, and mystical components. They both have people that can manipulate the four elements of Water, Fire, Earth, and Air/Wind. They both even have bald monks as their main characters! The big difference between the two is that Avatar: The Last Airbender was a game-changing animated series with fully human characters, an interwoven plot, and perhaps some of the best animation I have ever seen in an American cartoon. Xiaolin Showdown was… well, none of those things. It was a quirky and comedic, but simple show clearly written for children, with less than stellar animation and low budget. And yet, I have probably re-watched Xiaolin Showdown more times than I have Avatar: The Last Airbender. In fact, it’s probably the show that I have seen the most times. So let’s see what this poor-man’s version of Avatar is like. 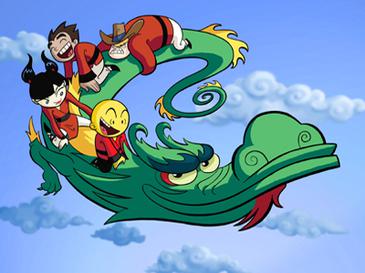 The series involves four xiaolin monks-in-training, Omi, Raimundo, Kimiko, and Clay, as they search for mystical objects with dangerous powers called Shen Gong Wu, and try to keep it from falling into the hands of the evil witch, Wuya. When two people come to a stalemate over a Shen Gong Wu, they must battle in the titular “Xiaolin Showdown”, which involves a short challenge that the competitors decide on. The showdowns have ranged from a fight, to a race, to playing basketball, to gathering acorns. It is also somewhat of a travel show, as the xiaolin warriors travel to different parts of the world to gather the mystical items. The main characters, too, are from different parts of the world, with Omi from China, Raimundo from Brazil, Kimiko from Japan, and Clay from America. This would be a cool concept, but part of the humor of the show revolves around stereotypes of said countries, which, as one can expect, can be controversial. For example Kimiko being obsessed with fashion and technology, Clay being a stereotypical Texan cowboy, and Omi having literal yellow skin. It is never meant to be taken seriously, but other than that there is really no defense to this, and I’ll leave it up to the reader to decide how far this kind of humor may be allowed in a show and still be funny. Another flaw that the show has is that it sometimes lacks continuity. For example, one of main antagonists alongside Wuya, is “evil boy genius” Jack Spicer. As the show continues he becomes less of a “genius” and becomes more idiotic, less intimidating, and the butt of many jokes. The main characters do point this out from time to time, but just because you point out your own writing flaw, doesn’t really make it less of a flaw. Another example is that character Dojo, despite being a fire-breathing dragon, is often extremely useless in a fight, except for certain times where he randomly becomes intimidating, simply because the humor or the story demands it. There’s also Master Monk Guan who seems to have lived roughly 1500 years with no explanation. 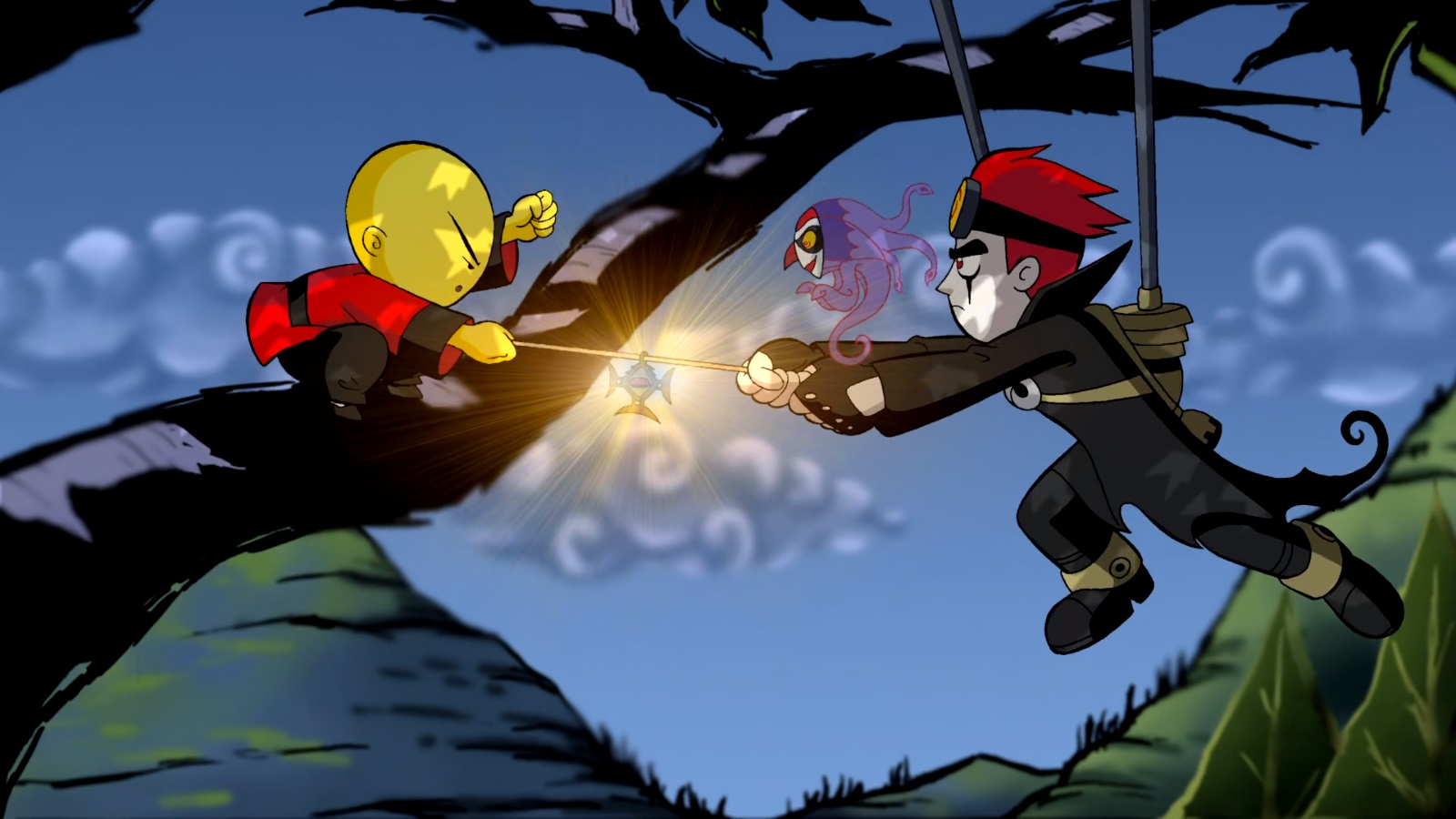 Comedy and action are the main draws of the show, and it does a pretty decent job at both, given with what it had. The banter between the characters is often fun, and the dynamic between them is spot on. The running gag of Omi being unable to use slang is also incredibly hilarious, and with the ubiquity of the misused idioms makes me kind of awestruck at the amount of thought that had to go into them by the writers. The action, though drawn with mediocre animation, can be unique at times, and with the “showdown” gimmick it allows the characters to be placed in many different scenarios, making each episode stand out from one another. An additional plus for the show is that it knew how to make a climactic season finale, with each one ending on a cliffhanger. The series finale was pretty great too, and though it ended on one of those “the adventures will continue” vibes, it was able to bring all of its arcs to a close. Speaking of arcs, it even has some pretty decent character arcs that are rather compelling for a show purely for kids. Omi’s arc involves understanding humility and the ability to work with his fellow monks rather than attempting to lead them all the time. With an ego that matches his giant head, throughout the show he tries to one-up his teammates, and a lot of the series is him learning to let others get the spotlight and to recognize his own flaws. Raimundo’s arc is also interesting as he goes from a slacker who SPOILER: at one point loses his way to the dark side for a time before going through a couple seasons worth of self-improvement and eventually becoming the leader of the xiaolin warriors :END SPOILERS. The show even has probably one of my favorite villains in the form of Chase Young, a warrior who sold his soul for eternal life and for power to take over the world, yet whose morality seems to sway into the good side from time to time. On the whole, I think I love this show, probably more than it deserves. But despite my opinions on it, there is one thing that I think is inarguable – and that is the talents of the voice actors in this series.

Xiaolin Showdown is essentially the show where all of the best (American) voice actors decided to get together. It has Tara Strong, voice of Bubbles from The Powerpuff Girls, Raven from Teen Titans, Timmy Turner from The Fairly OddParents, and many more, who lends her voice to Omi. Her uncanny ability to voice a young boy shines through here. She delivers her lines with such unabashed enthusiasm and talent, and punctuates all of her lines flawlessly. Tom Kenny voices FOUR characters in this show, all of which who sound COMPLETELY different from one another. The first is Raimundo who sounds like a slightly accented young teen, the second is Hannibal Roy Bean, who is a deep-throated intimidating villain, the third is Master Dashi, a laid-back mentor from ancient China, and the fourth is the Russian villain Vlad. You probably have heard Tom Kenny in any number of animated shows including Spongebob, from Spongebob Squarepants, and the Ice King from Adventure Time. Tom Kenny’s IMDB page is nuts and includes hundreds of voice roles. Grey DeLisle voices the xiaolin warrior of fire, Kimiko, but she is also known for her role in Avatar: The Last Airbender as another young woman who has the ability to control fire, Azula. For anyone who is familiar with the Disney voice actor, Jason Marsden, you’ll be happy to hear him playing Chase Young. For Seinfeld fans, Wayne Knight voices the sarcastic Shen Gong Wu-sensing dragon, Dojo. The wise, old leader of the xiaolin temple, Master Fung, is voiced in the first season by Star Trek actor, Rene Auberjonois, and then in later seasons by the voice actor of Brain from Pinky and the Brain, Maurice Lamarche. It also gives some decent secondary roles to Jennifer Hale and Kevin Micheal Richardson. What really ties together everything that was probably only mediocre in the series and makes it excellent, is the voice talent. Their comedic timing is perfect, as is their delivery. With these great actors around, the way all of the characters play off of one another is heightened. And when the show decides to get serious every now and then, the actors are versatile enough to be able to play those more heavy moments. By having great actors it makes the 2-dimensional characters more 3-dimensional, and through getting to know them from a fun and humorous point of view first, you care about what happens to them when the show gets to those darker finales. I cannot say enough how much I love the voice acting in this show, and it is most likely the reason why I continue to revisit the series.

Despite it not being one of the best shows around, the one thing that Xiaolin Showdown had going for it, was its simplicity and its voice cast. It was an easy and fun show to just put on in the background and enjoy while doing other things, yet compelling enough that there would be times that make you stop and watch what was going on screen. It had a good balance, got better as it went on, and knew to stop when it was at its peak. With such a brilliant set of voice actors involved it increased its enjoyablity, and if you are even remotely a fan of voice acting, I cannot recommend Xiaolin Showdown enough!

Now, I’ll leave you with a wonderful compilation of Omi failing at slang to give you an idea of the voice acting and the humor (no need to watch the whole thing, but my favorite comes in at about the 1-minute mark).