Even for a studio that made huge box office returns out of space raccoons and Ant-Man, Doctor Strange feels like a bit of a gamble. The adventures of the good doctor have always been among some of Marvel’s most esoteric, and the free-form psychedelic odysseys packed to the rafters with pseudo-Lovecraftian names make them hard material to tackle for a movie even before one gets to the orientalism intrinsic to the character’s origins. Before spell one can even be cast, director Scott Derrickson and Benedict Cumberbatch had to pull off the trick of making a character defined by the arcane appealing to general audiences, and with intriguing world building, astounding visuals, and Marvel’s signature humor, they on the whole succeed. 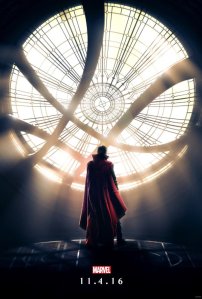 The plot: Doctor Stephen Strange (Benedict Cumberbatch) is cocky, arrogant, and the best surgeon in New York City. A car accident spares him his life, but leaves him with extensive nerve damage in his hands. Exhausting all scientific means of healing, Doctor Strange gambles a trip to the Himalayas, where he hears a guru known as The Ancient One (Tilda Swinton) can restore his hands through more unorthodox methods. Magical methods, specifically; under the tutelage of The Ancient One, fellow student Mordo (Chiwetel Ejiofor) and librarian of ancient tomes Wong (Benedict Wong), Strange learns not only  how to heal his body through magic, but how to use that magic to protect the world from eldritch threats. Calling upon his newfound powers, Strange must overcome a lifetime of self-centeredness to help put stop to evil sorcerer Kaecilius (Danish superstar Mads Mikkelsen) from summoning an ancient evil.

Marvel Studios eases viewers into the trippy magical world of Doctor Strange by building its foundations on some sturdy, familiar blocks. If the plot bears more than a passing resemblance to the likes of The Matrix, Batman Begins, or –most closely and most improbably– 2011’s best forgotten Green Lantern, it can be forgotten. From the basic plot structure of a man finding himself having to become a hero in a suddenly very weird world, Marvel, Derrickson, and writers Jon Spaihts and C. Robert Cargill craft one of Marvel’s standout worlds. The school of the Ancient one and the various sorcerer’s sanctums across the globe are lived-in spaces, never falling into the CGI intangibility that frequently plagues the similarly fantastical Thor franchise. The Inception-informed folding cityscapes pack their proper awe and make for some of the film’s most memorable set-pieces, but the day-glo dimensions through which Doctor Strange frequently hurtles (deliberately calling back to the blacklight Doc Strange posters of the 60s and 70s) that stand out the most. Immateriality is more or less Strange’s whole deal, and grounding his adventures on a page, much less on a screen is occasionally a challenge. Luckily, it’s a challenge well-met.

Doctor Strange isn’t a punching guy; his aren’t typically the sorts of problems that can be solved with explosions. Rather than force Doctor Strange into being “master of the mystic arts” and “totally just pummeling dudes”, Derrickson makes casting spells more physical, fluid, and far-less verbal than their comic counterparts. Casting and wielding magic resembles, alternately a form of martial art and operating machinery. It’s not magic as practiced by Harry Potter or the inhabitants of Middle-Earth, instead becoming its own unique language, different practitioners using it in ways that befit their personality. The way characters use magic is informed by their personality, leading Doctor Strange to conflicts and battles that hardly constitute either. The finale, where heroes typically come to bombastic blows with his rival, is replaced with something more unique and decidedly more novel in Doctor Strange, and should make viewers with explosion-fatigue happy.

Oddly enough, the distinct way a character wields their magic is sometimes more revealing of their personality than the script is. There are fine performances all around, but aside from our title guy, characters are pretty thinly-sketched the further they get from the center. Like Strange, Kaecilius and Mordo turned to the Ancient One’s teachings as broken people looking for healing. The details of that brokenness are never divulged, though the script would benefit from it. There’s more than ambition alone that makes a guy try to summon an ancient evil onto our plane of existence, and Kaecilius would feel more threatening if we knew what that was. Mordo, an important player who only promises to be more so in the sequel, is a little too scantily characterized to effectively be the foil he’s cast as. This isn’t a script that’s structured to give Christine Palmer (Rachel McAdams) –former love interest and colleague of Strange and his last tangible link to the non-magic word– a whole lot more to go on than the preceding character description. I may have already discussed her more than the director and writers. Marvel gave us a damn great hero in Jessica Jones, and Brie Larson’s Captain Marvel exists at least in concept, but eight years in the female supporting players in Marvel movies still feel bafflingly underserved.

Doctor Strange is a weird and wild ride that diverts from Marvel formula in some places and dips briefly back into others. In spite of complaints about the preponderance of origin stories and the more-concerning complaints about samey villains and barely-there female leads, Doctor Strange shines with its own lava lamp glow in the Marvel continuity.